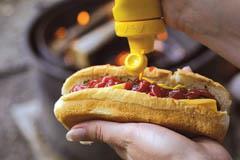 Mustard - some find it repellent

Never heard of it, what does it do?

Sinigrin (1) is a glucosinolate. The compound is stored in mustard seed and it provides the plant with a defence against being eaten by herbivores.

No, it is harmless. But when an animal chews a mustard seed, plant cell walls are opened, sinigrin is released and comes into contact with the plant enzyme myrosinase. This enzyme catalyses the break down of sinigrin into its constituent molecules, which include allyl isothiocyanate (3-isothiocyanato-1-propene, 2). This is the chemical that acts as a repellent.

How does allyl isothiocyanate work?

Certain neurons, nerve cells in the body, are sensitive to temperature and to chemical stimuli, resulting in messages being sent to the brain. Transient Receptor Potential (TRP) cation channels in cell membranes permit the flow of the ions across the membrane that sends the message. The best known of these is the TRPV1 channel, which is activated by temperatures above 42°C and by capsaicin, the chemical responsible for the 'heat' we associate with chilli peppers (the TRPV1 channel is popularly known as the 'capsaicin receptor'). The TRPM8 channel is activated by cold temperatures and by menthol. The allyl isothiocyanate derived from sinigrin in mustard seeds activates another receptor, the TRPA1 channel.

Does allyl isothiocyanate occur in other foods?

The chemical is also released by horseradish and by the so-called 'Japanese horseradish', wasabi, an indispensable accompaniment to sushi.