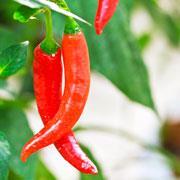 Sudan 1 has been found in chilli powder

What's this Sudan 1 dye stuff that caused all the recent fuss?

Sudan 1 is an azo dye. In laboratory tests when the dye was injected directly into animals such as rats, mice and rabbits, it caused cancerous tumours in organs such as the liver. Since July 2003, chilli powder imported into the UK has had to be free of Sudan 1. However, The Food Standards Agency (FSA) recently found the dye to be present in over 500 foodstuffs, causing these products to be removed from the shelves of UK shops. Sudan 1 was banned as a food colourant in the US in 1918 and in Canada in 1934, but it took Europe until 1995 to prohibit its use in food.

Does it come from the Sudan?

It is a bright red solid that can be recrystallised from ethanol.

If the dye is toxic, why do people use it?

Sudan 1 is cheap to make, and it has lots of 'safe' uses, eg as a colourant in floor and shoe polishes, petrol and oils.

How did the chemical get into food in the first place?

It seems that the dye was used to colour some chilli powder produced in India, to make the spice look more attractive, and this was imported into the UK before the July 2003 deadline. The spice was then traded between various food ingredient suppliers before it was used in the manufacture of some Worcester sauce, a widely used food ingredient.

Is the fuss justified?

The risk has not been assessed so far, but the quantity of dye present in the foodstuffs is much lower than the amounts which were used in the laboratory tests to produce the tumours in animals. Yes, Sudan 1 is a carcinogen if eaten in very large quantities, but according to the FSA, at the very low levels found by its analysts, occasionally eating foods containing these traces of dye, is safe. And, after all, there are known carcinogens freely on sale in every high street, despite carrying a health warning to that effect on every packet of 10 or 20 .... It's a reminder, though, that the price we pay for food we can safely eat is constant vigilance, and requires trained chemists to analyse each product.