In this issue: Tamiflu 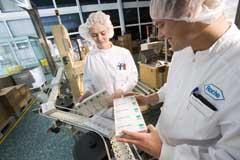 Preparing for a pandemic

The drug that cures flu?

Tamiflu (oseltamivir, 1) doesn't cure flu. The drug stops the influenza virus from spreading in the body, but only if it is taken within ca 36 hours of the onset of symptoms. Tamiflu slows down viral replication, allowing the body's immune system time to deal with the virus. This limits the severity of the illness, and how long it lasts.

How does the drug work?

The virus infects the body by attaching to human cells, which it invades and uses as a host to replicate copies of itself. For the infection to spread, infected cells have to release these new influenza virus particles. The virus initiates this by using neuraminidase enzymes on its surface to hydrolyse sialic acid (neuraminic acid) ends of glycoproteins on the cell surface, which enables the virus particles to break free of the cell membrane. Tamiflu works by inhibiting the neuraminidase enzymes on the surface of the influenza virus. The drug molecule 'plugs' the active site of the enzyme and stops new virus particles from being released. 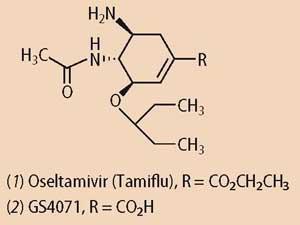 How is Tamiflu made?

The starting material for the drug is shikimic acid, which is present in the pods of star anise. The high demand for the drug means that it is now made using bacterial fermentation methods.

Tamiflu is a prodrug, usually administered as oseltamivir phosphate and swallowed as a pill. The prodrug is absorbed from the gut and hydrolysed in the liver to give the active molecule, known as GS4071 (2). 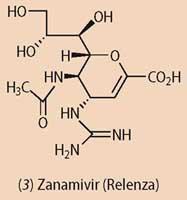 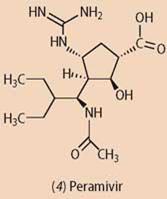 Is Tamiflu the only treatment?

The anti-flu drug zanamivir (Relenza, 3) was discovered before Tamiflu but it has the disadvantage that is must be administered as a dry powder puffed into the lungs by an inhaler - many people would rather take a pill like Tamiflu. A third drug, peramivir (4), is under development and in clinical trials. The drug is more potent than the others, and it has a longer lifetime in the human body. Unlike the other drugs, peramivir is administered as an injection.