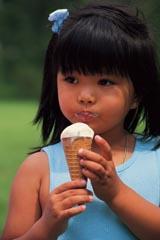 Is it true that you can make vanilla from cow dung?

Vanilla, no; vanillin, yes. Vanillin (4-hydroxy-3-methyoxybenzaldehyde) (1) is a single molecule, which is the most important flavour compound of vanilla essence, which itself is a mixture of lots of different molecules. Vanilla essence is used in soft drinks such as Coca Cola, many desserts, and particularly in chocolate.

The vanilla orchid, Vanilla planifolia, is native to Mexico. Hundreds of years ago, the Mayans and Aztecs used the extract obtained from vanilla beans to improve the flavour of their chocolate drinks. By the early 16th century, the conquistadors brought the vanilla plant to Europe. Vanillin is also an important ingredient for the perfume industry ever since it was used by Aimé Guerlain to create Jicky (1889), the first 'modern' perfume made from synthetic ingredients.

So why do we need to make vanillin?

The vanilla plant is difficult to pollinate and cultivate. This makes natural vanilla expensive. Vanilla is not present in the flavourless green beans that are harvested; they need to be cured for three to six months to generate the vanilla. By the middle of the 19th century demand for vanilla outstripped supply so that synthetic routes to vanillin were needed.

How was this done?

One method, used for many years, started from eugenol, found in cloves, nutmeg and cinnamon. In alkaline solution this isomerises to isoeugenol, which can then be oxidised to vanillin. An alternative route involved refluxing an alkaline solution of guaiacol with chloroform.

So where does the cow dung come in?

Dr Maya Yamamoto of the International Medical Centre of Japan realised that cow dung contained a lot of lignin, from the animal's feed. Lignin is found in plants and wood, its polymeric structure strengthens their tissues. Yamamoto has found that vanillin can be made from the faeces of many (but not all) herbivores. In October at a ceremony held at Harvard University she was awarded the Ig Nobel prize for chemistry for 2007 for her research - presented for the year's most improbable research, the awards are a spoof of the real Nobel prizes.