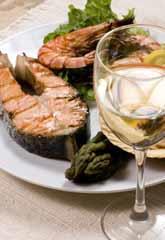 They're delicious together. But why never red wine and fish?

Combined together, the two can result in a unpleasant 'fishy' aftertaste.

A 2009 study by a team of Japanese scientists led by Professor Takayuki Tamura provides an answer. The team asked wine tasters to try 38 red wines and 26 white wines from around the world while eating scallops and to rate the aftertaste associated with each pairing. The researchers used several techniques, including gas chromatography and atomic absorption spectrometry, to analyse the chemical components of each wine, eg ethanol, methanol, ethanal, metal ions, phenolics and organic acids.

And what did they find?

By comparing the tasting results with the chemical analyses the team found that wines with high levels of ferrous iron, Fe2+ ions, caused the scallops to have an unpleasant fishy odour. In addition, they found that the intensity of the fishy aftertaste increased when wine was dosed with ferrous sulfate while the taste was suppressed when an iron-binding chelate (edta - 1,2-bis[bis(carboxymethyl)amino]ethane]) was added to the wine.

What chemicals cause the nasty aftertaste?

The aftertaste is caused by carbonyl compounds that result from the oxidation of polyunsaturated fatty acids with lipoxygenases (which are iron-containing enzymes) or by autooxidation. These compounds include hexanal, heptanal, nonanal, decanal, 1-octen-3-one (1), 1-octen-3-ol (2) and the unsaturated aldehydes (E, Z)-2,4-heptadienal (3) and its isomer (E, E)-2,4-heptadienal (4), and (E, Z)-2,4-nonadienal and its isomer (E, E)-2,4-nonadienal. Using gas chromatography-mass spectrometry (GC-MS) to monitor the volatile compounds released from ground dried scallop soaked in red wine, Tamura's group showed that the concentration of some of these oxidation products increases with increasing Fe2+ concentration in wine.

What's the role of iron?

The Fe2+ ions can catalyse lipid oxidation via the breakdown of existing lipid hydroperoxides. Although ferrous iron is the only one of several metal ions found in wine to have an effect upon this taste, the researchers point out that other wine components such as phenolic compounds and the pH of wine may also affect lipid oxidation, so further investigation is needed. But for now, the research suggests that a red wine low in iron might go down well with fish and chips.