Uptake and grades are rising for chemistry, but let’s a take a closer look at the details

Chemistry continues to be a popular subject at GCSE and participation in all sciences remains high. The number of entries for GCSE chemistry across the UK rose 1% to 170,034; this is similar for biology (up 0.6% to 177,454) and physics (up 1.1% to 168,330). In England, chemistry as a separate science as a proportion of entries continues to be higher than in Wales and Northern Ireland. 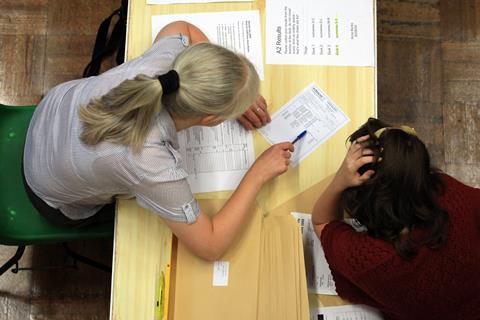 General trends for exam entry and grades in chemistry are positive, but it’s not A* all round

Entries for the double award science GCSE rose 5% this year. Allowing for an increase in overall GCSE entries of 1.4%, this means there was a slightly higher proportion of students taking science GCSEs (including separate subjects) compared to 2018. The gender split remains fairly equal.

Grade comparisons between regions is difficult, although this year Northern Ireland introduced a new C* grade, so its A*–C grades equate to levels 9–4 in England but they still remain out of sync with A*–C grades in Wales. In England, it’s the second year that GCSEs have been marked using the new 9-1 system. This year the percentage of level 9 and 8 awarded rose slightly from 27% to 27.6% for chemistry; and rose to 3.5% from 2.9% for double science.

‘The new GCSEs are definitely more challenging, but as such are a much better preparation for A-level study,’ comments Helen Skelton, head of science at Beaumont School in St Albans. ‘We have actually seen our students perform better in the new GCSEs, with some of our highest percentages of students achieving top grades and grades 9–4 (A*–C equivalent) in science over the past couple of years. Some students have found the course and exams very challenging, but with high-quality teaching and support the majority of students are able to be successful.’

Meanwhile, chemistry A-level also remains popular; almost 60,000 students took it in England, Wales and Northern Ireland this year, a growth of 9% compared to last year despite total exam numbers dropping by 1.2% in the same timeframe. The number of A* and A fell slightly to 29% from 31% in 2018.

The results this year are outstandingly good

Entries in biology, chemistry and physics combined accounted for 21% of all A-level entries – the first time the sciences have accounted for more than a fifth. Female students made up 50.3% of science entries. In chemistry, the rise in the number of girls taking chemistry is the largest since 2011 – up 28% from 22,753 to 31,757. It’s the third consecutive year that girls outnumber boys, making up 63% of entries (31,757).

Looking at chemistry A-level entries by country, growth is seen in both England and Wales. In Northern Ireland, while the absolute number of students taking chemistry A-level is roughly the same, there was a decline in overall entries, which indicates a slight increase in the subject’s popularity.

John Holman, emeritus professor at the University of York and former president of the Royal Society of Chemistry, says the results this year are ‘outstandingly good’. However, the increase is not translating into undergraduate numbers, which have plateaued. This may be because more students are realising the general value of STEM subjects or because more applicants for medicine are taking chemistry, he says.

Describing the growth in the number of girls taking chemistry A-level as ‘spectacular’, he continues, ‘it is so pleasing; 20 to 30 years ago, fewer than half of A-level chemistry candidates were girls.’ He attributes this partly to more girls applying for medicine (which usually requires chemistry) but also to the increasing quality of chemistry teaching. ‘There is evidence to show that girls are more responsive to good teaching and more deterred by poor teaching.’ There has been a significant effort from many sources, including the RSC and chemistry departments, to promote chemistry to girls, so perhaps these results are the fruits of this hard work, adds Andy Parsons, admissions tutor for chemistry at the University of York.

Helen Skelton has noticed that the numbers of students at her school taking science A-levels has increased over the past eight years. However, she says one of the key factors in students taking A-level chemistry is that it is required for university courses such as medicine and veterinary medicine, to which a large number of students aspire. ‘And my perception is that this attracts a significant number of girls to the subject,’ she adds.

However, the picture for chemistry is not particularly rosy in Scotland. As a proportion of total entries, student numbers taking chemistry have fallen from 11.9% to 10.5% at Advanced Higher; from 6% to 5.4% for Higher; and from 6.2% to 5.1% at National 4 and 5 (using 2014 as a reference year, the first full year of National 4 and 5 qualifications following the introduction of Curriculum for Excellence). However, after several years of declining numbers, students taking chemistry Highers have increased to 10,047 from 9990 in 2018. This rise was not seen in Advanced Highers (2452 compared to 2591 in 2018) or Nationals (19,910 compared to 20,116).

‘While it is positive to see some recovery in terms of the numbers … and encouraging to see that it is still the second-most popular subject at Advanced Higher, the long-term picture is still a worry,’ says Danièle Gibney, interim education policy manager at the RSC. ‘And this is not just a concern facing chemistry. The number of candidates pursuing STEM qualifications has dropped over the past five years as the options presented to students have narrowed.’

Russell Morris, head of the School of Chemistry at the University of St Andrews, comments: ‘The declining numbers of chemistry students sitting Highers is somewhat of a worry. Of course, we are pleased to see the number increasing this year and we hope that we have passed the lowest point – such numbers do often have a cyclical nature to them, after all. Hopefully, we will see a further increase over the next couple of years.’

Russell is also concerned that some schools are not able to offer Advanced Higher in all the STEM subjects; this has a clear implication for scientific literacy of school leavers. ‘It is imperative that investment in our future workforce is maintained and that all students have the opportunity to study STEM subjects to the Advanced level,’ he says.

In Ireland, this year sees a slight increase in performance at the higher end of the grading structure

For the third year running in Ireland, chemistry accounted for 2.5% of all exams sat across Higher and Ordinary Level of Leaving Certificate. In absolute numbers, this represents a 4% increase from 2018 as there are more students overall across all subjects, and follows a decade-long slight upward trend in uptake of chemistry. Additionally, 4% more students studied the combined chemistry and physics subject compared to last year.

The same proportion of students (87%) entered for Higher Level as last year. This means that a slight shift seen following the change in grading structure in 2017 has remained consistent; before 2017, the proportion entered for Highers was around 84%. In terms of performance, this year sees a slight increase in performance at the higher end of the grading structure, with 2% more students receiving the top grade of 1 in chemistry.

‘It would be good to see some increase in the subject’s popularity,’ says Danièle Gibney. ‘While 17% of students take chemistry, 61% take biology – so there is room for growth.’

Humphrey Moynihan, Head of the School of Chemistry at University College, Cork (UCC), says that despite this lack of popularity at school age, undergraduate degrees in chemical sciences are not suffering. This may be because of a different system in Ireland. At UCC, there are two streams of entry: one in chemical sciences, and one in biological and chemical sciences where the students decide between the two at the end of the first year. Entry requirements are a lab-based subject and maths, so many students do not have chemistry.

‘We teach chemistry from scratch and provide extra support,’ Moynihan explains. ‘I would prefer school uptake to be higher, and we do a lot of promotional activities around chemistry in schools. When you drill down into the data there are hotspots and coldspots depending on factors such as teachers and location. However, these numbers are not having a critical impact on the survival of the subject at university.’