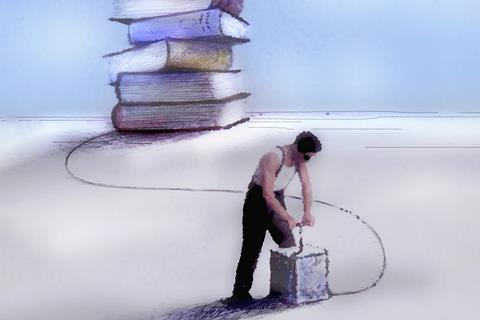 I remember my first chemistry textbook. It was meant to feel new and fresh, with its exploding circles of information, garish colours on the front cover and a huge picture of some kind of chemical reaction. It felt engineered to be engaging and cool. Judging by the reactions of my classmates, it hadn’t succeeded – and we shouldn’t be surprised. There’s a saying that armies are built to fight the previous war, not the one you’re currently fighting; in the same way, even the newest chemistry textbook feels obsolete before the first crack of its spine.

This dated outlook isn’t just seen in the design. Last year, a group of researchers across the UK and Ireland investigated four A-level (or equivalent) chemistry textbooks, looking at gender balance. They found that, of 105 historical chemists highlighted, only three were women. When it came to images, only 16 of the 131 photos and illustrations were of women alone, and only eight of those women were shown as scientists compared with 28 men. Instead, women were shown shopping, doing laundry or in the kitchen. A similar study in the US, this time in higher education, found that, on average, a man’s name appeared every four pages in textbooks; for women, it was 250 pages.

This matters, as it reinforces our unconscious biases – those little prejudices we all have but don’t realise. Unfortunately, with textbooks there will always be an aspect of gatekeeping: someone, after all, has to write its pages, choose which chemists to cover and which role models to highlight. Even with sensitivity around biases, such books can never be all-inclusive or representative.

There must be a better way. After all, a simple search online reveals a whole spectrum of role models, from chemistry’s past or today’s emerging stars. There is an incredible, diverse cast, representing different genders, LGBT+ status, disabilities and ethnicities, just waiting to be discovered. These role models are accompanied by accurate, comprehensive content, and their approach is often more current than anything in print. Why can’t we encourage students to explore this world, and find a voice that speaks to them? Isn’t it time to abandon the textbook for good?

Is Kit right, or is Kristy Turner right when she argues texbooks deserve a place in every teacher’s toolkit? Tell us what you think in the comments below or on Twitter.

Many students have decided to do that already. Anecdotes shared by teachers indicate students reach for their phone first when they’re stuck. Far from discouraging this, we need to acknowledge it’s part of 21st century learning and embrace it. Not only does this help students learn in a way that works for them – a cornerstone of modern education – it also increases equitability: no more would kids from lower income families and less affluent schools be disadvantaged because they can’t afford the latest editions. The internet is built on access for all.

Free teachers and save money

There are, of course, dangers to this approach. Misinformation abounds online, and even well-intentioned streamers can get their facts wrong and mislead their viewers. The internet decentralises learning, which could lead to greater variation in quality. And a key part of a teacher’s job is to help students pass on to the next stage of education – while textbooks may be outmoded, generally their information is focused on the syllabus and what students need to know for their exams.

These concerns are valid, but easily addressed by sensible vetting of content, reinforcement of concepts in the classroom, and feedback to students on their learning to ensure they’ve not misunderstood. In short, by doing what good teachers do anyway.

We need to accept the days of the textbook are over. It’s time to free teachers to tackle more innovative lesson plans and save schools thousands in paying for materials that foster stereotypes and are largely ignored by students. The next generation has already embraced the 21st century’s technological revolution. It’s time their examiners caught up.