A global experiment from the technician’s cupboard

Jan Hodge, technician at a middle school, talks about carrying out the Royal Society of Chemistry's global experiment 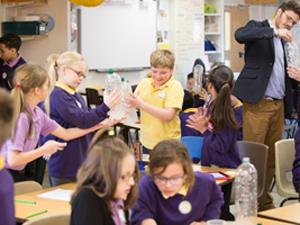 This year the Royal Society of Chemistry has launched a new global experiment aimed at engaging 7-14 year old students anywhere in the world. This year’s theme is ‘smart materials’ and the experiment focuses on the science of hydrogels. You can find out more here, but what we really want to know is … how much water can your hydrogels hold?

Jan Hodge, a science technician at a middle school in Royston, UK, tells us about her experience running the global experiment.

During Science Week this year we conducted the global experiment with our year 7 classes – an experiment I whimsically called ‘Suck it up’ backstage in the prep room. A couple of weeks ago I revealed to the school that I had a serious need for nappies – you know, that packet that’s lurking at the back of the cupboard at home that you can’t bear to throw away – Mrs H needs it. Along with a few laughs, I easily acquired enough nappies to run the experiment with 120 pupils. A few towels repurposed from the PE lost property cupboard served as a reasonable substitute for towelling nappies and we were all set.

Our teacher put a 10 cm x 10 cm nappy section into a litre of water and left it for 30 minutes. Holy cow those things suck! Watching the kid’s amazement as the nappies swelled and swelled was hilarious. It didn’t look as though there was much mass in them at first as all you could see was the wadding and some teeny tiny beads, but after the experiment it was as though alien babies had exploded across the trays. As it is, of course, impossible to resist poking the hydrogel, we had to convince our kids not to wash their hands in the sinks or we would be in real trouble! A dustpan and brush came in handy for spills.

The kids loved entering their data on the website and seeing that UK nappies appear to contain more hydrogel than those from Pakistan (so far).

We had interesting conversations as we discussed that these explosive nappies could only go to landfill whereas towelling ones could be reused even if you did get wetter. One astute student noted that being wet might help toddlers to learn not to wet themselves as it is uncomfortable – with a disposable on it hardly notices it. We’ll be referring to this again when we cover recycling as it was amazing how much mass the hydrogels could hold.

One last practical point: we had to warn the cleaner to be careful picking the bags out of the bins as they were really heavy – so, in hindsight, smaller disposable bags or collecting and reusing the hydrogels for something else might have been a good idea.

The experiment was simple to run and offered the opportunity to investigate hydrogels and the impact of these materials on our environment, as well as take part in a fun and safe science experiment.

The global experiment site contains all the information teachers need for taking part. It also includes a range of activities from one quick simple experiment to a deeper investigation that can lead to students earning a CREST award.

Read more about hydrogels in the upcoming July issue of the Mole.