To the archaeologist and historian coins are chronological markers, invaluable for gaining insight into economic, political and even scientific developments. Chemistry has played its part in numismatics - in the manufacture, analysis, aesthetics and conservation of coinage.

The first metal coins, which appeared in the Middle East around 700 BC, were made of gold and silver. These two metals were accessible at a time when the chemistry and technology of metal extraction from binary metal compounds were unknown. The chemical inactivity of gold meant that ancient gold coins, even after centuries of exposure to the atmosphere, or of burial and exposure to the corrosive chemicals in soil, are to be found in as good a condition as they were when they were in use (Fig 1).

Over the centuries, the base metals Fe, Cu, Ni, Zn, Al, Sn and Pb have been used as minor alloy constituents or as principal components in coins. Generally, a metal must be reasonably hard wearing to ensure the economic lifetime of a coin and must retain an acceptable appearance on exposure to the atmosphere. And it must not be too expensive. As a soft and expensive metal, gold is now usually alloyed with copper to give a hard-wearing alloy. British gold sovereigns, which are still minted, are made from 2 carats of alloy and 22 carats of gold, and comprise 91 per cent Au, 8.3 per cent Cu. (A carat is a measure of the purity of gold, pure gold being 24 carat.)

Platinum made only a brief appearance as a coinage metal. A few high-value coins in Russia were made in the mid-19th century, at a time when platinum had recently been found in the Ural mountains. For a while the value of platinum fell below that of gold, and this gave rise to the emergence of counterfeit sovereigns in the 1870s. These were made from platinum and had a thin layer of electrochemically deposited gold. Bronze (Cu-Sn alloy) farthings issued between 1897 and 1917 were darkened using Na2S2O3, resulting in a surface layer of copper sulphide. This was done to avoid confusion between a newly minted farthing and a gold half-sovereign, the latter being worth 480 times the former. Bronze pennies issued between 1944 and 1946 were similarly treated to deter hoarding of new pennies at the end of World War II. 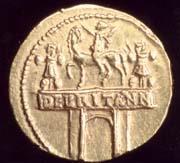 As chemical and technological knowledge improved, so did demands on the durability of coins increase. Modern conditions require that the metals and alloys used in coin production are extremely pure. Very small traces of non-metals, such as carbon, sulfur or phosphorus can cause brittleness, which cannot be tolerated in modern coin-striking equipment which operates at high speeds and pressures.

In the past 60 years electroplated iron and steel coins have appeared in many countries. These were a response to the increased costs of providing huge quantities of low-value coins for the prosperous consumers of the post-war years. From 1992 British 'bronze' coins have been made of copper-plated steel.

As well as being a good indication of the political and economical state of a country, analytical data of ancient coins - metal speciation and concentration, for example - can tell us much about the extent of chemical knowledge that existed at the time a coin was made. Early Roman coins, for example, contained up to 5 per cent oxygen. The only uncombined metals present in such coins were those which formed oxides that could be reduced by carbon below 1600°C. This was the hottest temperature achievable in ancient forced-draught charcoal furnaces. Later Roman coins contained no oxygen, indicating that they were using an improved reduction technique, whereby higher temperatures were obtainable.

Destructive or non-destructive analytical methods are used in the analysis of ancient coins. The former, which is only used, if a coin is of low value or is available in abundance, involves dissolving the coin in acid, followed by atomic absorption spectroscopy or complexometric titration. Neutron activation analysis* is an example of the latter technique, and is the most widely used method for analysing silver in coins. Other non-destructive methods include linear X-ray spectrometry, electron microprobe analysis, and mass spectrometry.

Silver coinage was the universal medium of trading for centuries. The silver content of the coins made in city mints was a reflection of the status of the city as a trading centre. Traders of good repute only dealt in high quality silver coins as evidenced by the high silver content of those coins found along the old established trading routes, eg from the Mediterranean, through the Middle East and Central Asia, to China.

If military expenditure increased, or during times of declining prosperity, a government would put only enough silver in its coins for them to remain acceptable to the public. Sometimes, however, there was a more subtle reason for the decline in silver content. Up to ca 100 AD Roman silver coins contained more than 90 per cent Ag. Thereafter, silver supplies grew scarcer, and Roman technology was unable to extract silver from low-grade ores, which by the third century AD were the only primary sources of silver available. However, at around this time, deposits of AgCl (chlorargynite) were found in Cornwall, Brittany and Alsace. The Romans observed that if copper or bronze coins were dipped in molten AgCl (mp 455°C), they became coated with silver: 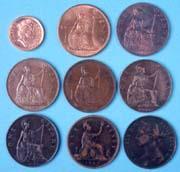 Non-destructive methods of analysis have also been valuable in studying the non-uniform distribution of elements in ancient coins. Such studies have revealed for example:

The analysis of corrosion products, resulting from centuries of burial, is also informative. Bronze coins, for example, exhibit surface copper enrichment after long contact with soils as a result of a change in soil pH. Lead coins show surface enrichment in lead compounds - such as PbCO3 and Pb(CH3COO)2.PbO - after a long period of burial. The formation of such compounds can provide valuable information about soil pH, which in turn can shed light on ancient fertilising methods. 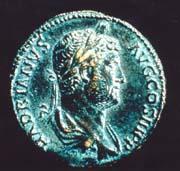 Isotopic analysis is used to determine the origins of metals in coins. The main source of lead used in coins was PbS. The lead isotopic ratio usually varies according to the site of a geological deposit, and this does not change, whatever chemical transformation the lead may experience. Even if only lead corrosion products are available for analysis, we can discover the original source. This technique has revealed, for example, that the Londinium (London) Mint in Roman Britain used only lead mined in Britain.

The appeal of ancient coins is not only in their history but also in their colour, as provided by the chemical elements and compounds on their surface. They are miniature antiques and works of art.

A newly minted coin is lustrous but, apart from gold coins, the metal surface eventually becomes toned (Fig 2). After a very long time, in the case of copper or bronze coins, a green patina is formed (Fig 3). To an artistic eye these effects, caused by oxidation and other environmental chemical reactions, give a coin, and many other old metal objects, a desirable look of age.

Toning refers to the formation of a thin surface layer of metal compound, chiefly oxide or sulfide. Silver coins, for example, become grey on reaction with oxygen or sulfur (Fig 4). In the case of very old silver coins an attractive blue iridescence often occurs, which may be a result of partial photoinduced decomposition of surface silver compounds.

Green patina formation on copper or bronze coins involves more deep-seated reactions in the metal, which are regarded as corrosion. Often a progressive breakdown of the metal structure occurs, and the coin becomes brittle.

There are three specific effects resulting from the corrosion of copper and its alloys:

Human contact with a coin can also initiate a chemical reaction. Perspiration contains a cocktail of corrosive chemicals, including NaCl, KCl, NH3, urea and aminoacids. Also sebum, the waterproof layer on our skin, secreted by the sebaceous glands, gives rise to the formation of fatty acids which can lead to corrosion on the coin surface.

The only permissible cleaning of ancient coins is that which removes grease and dirt. This is usually done with a degreasing solvent such as CF3CCl3 or a simple soap solution. Physical or chemical treatments are avoided because they result in etching or pitting, and thus destroy the appeal and value of the coin. Moreover, such processes remove chemicals that have been formed on the surface of the coin over a long period of time, which are part of the coin's history.

Caution, too, is required when choosing the type of containers used for storing coins. Wooden cabinets must be of seasoned mahogany because other woods emit vapours of ethanoic acid and methanal that would lead to corrosion. Wood adhesives may contain sulfur compounds, which could react with metals in coins. Paper is also unsuitable for storing coins, unless it is acid free.

The most offensive material used for storing coins is polyvinyl chloride (PVC) and ironically this is used almost universally in the form of small envelopes for holding coins. PVC decomposes in the long term, emitting HCl. Stabilisers are added to PVC to minimise this effect, and plasticisers are added to make PVC flexible. Both stabilisers and plasticisers contain fatty acids, which migrate to the surface, where they react with the coin.

Polyethylene terephthalate is so far the most satisfactory material to use for storing coins. It is chemically stable and can be used without the addition of plasticisers.

Chemistry is thus as indispensable in numismatics as it is in many other historical and artistic disciplines.

Dr David Goodall can be contacted at Strathmore, Silver Mill Hill, Otley LS21 3BJ. This article is based on an RSC lecture given to schools and colleges - see the RSC events page.

Footnote: *In neutron activation analysis, the sample is exposed to neutrons. A fraction of atoms capture a neutron and become radioactive, with a characteristic half-life. These nuclides decay, emitting a β-particle and γ-rays. The number of γ-rays of a specific energy is used to determine the amount of the element in the sample.

The RSC organises a broad range of events to promote a positive image of the chemical sciences though public and policy events, educational activities and training courses