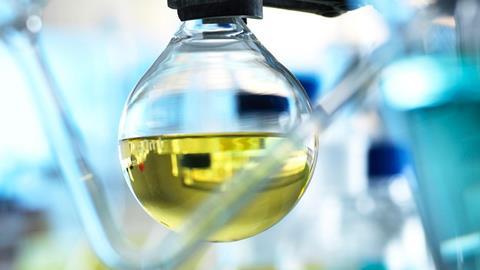 After ten years, many experiments and cohorts of new students, Catherine Smith shares her experience completing a multistep synthesis with her science club

Ask any school science teacher and they will tell you the challenges of running an effective practical activity. The curriculum, timetable and limited equipment can all get in the way. Students love practical work but the restrictions of a school environment often result in them simply following a set of written instructions to achieve a pre-determined endpoint.

As a teacher with a research background I am keen for my students to experience the thrill of discovering something new. I believe it is these experiences that inspire people to become scientists.

My students undertook an organic synthesis project as part of an extracurricular science club. Not only has the project resulted in the completion of a total synthesis, but along the way it has inspired a number of students into careers in scientific research.

The project began in 2008 when an enthusiastic group of young scientists moved into my school’s sixth form. I was intrigued to see if the students, armed with only a basic knowledge of organic chemistry, could tackle a multistep synthesis. Was this possible in a school laboratory with basic equipment?

Lining up a target

We picked our target molecule carefully. The chemistry had to be robust. To be successful, syntheses needed to be possible on the open bench. Intermediates needed to be stable enough to be stored in the cupboard for a week or more between science club sessions. Moreover, purification of intermediates was challenge; with no access to column chromatography, products had to be purified by standard work-up techniques or recrystallisation.

We decided to make something containing a biphenyl ring system. Biphenyl compounds are known to crystallise easily, which we hoped would simplify purification. This ring system is also easy to synthesise via a Suzuki coupling reaction. The first science club cohort began scouring the internet for potential target molecules that contained the biphenyl ring.

The students settled on a target molecule that turned out to have even more benefits. The majority of the chemistry in its synthetic route was A-level chemistry students would meet during their studies. In addition, the properties of the molecule meant it had a possible medicinal chemistry application as a histamine H3 receptor antagonist. This gave the project a second focus; the biochemistry of histamine interactions, and a potential real world application.

The target molecule and synthetic route

Although we tried to choose a realistic target, we didn’t have all the necessary equipment. A stirrer hotplate, for example, was essential for heating the Suzuki coupling overnight. Just like a real research project, the students set about applying for funding, and then sourcing and ordering equipment and chemicals.

We joined forces with Ed Anderson and Jonathan Burton, both organic chemists at the University of Oxford, to make an application for a Royal Society Partnership Grant. This gave the money we needed and was also the start of an ongoing collaboration.

Of course, students couldn’t work on this full time and maintaining their enthusiasm could have been a big problem. One week they planned the experiment, the next they would do a risk assessment. The week after the experiment was carried out, and then worked-up the week after that. From beginning to end a single experiment took over eight weeks – a half-term or more. Including the students in all aspects of the project, from funding application onwards, was vital both to allow them to have ownership of the project and to maintain their interest. Unwrapping a new stirrer hotplate or a box of chemicals that you have applied for funding for is rewarding. It is a success in its own right.

I have encouraged all students to apply for small amounts of funding so they feel that sense of achievement and ownership. Also, it gives them an opportunity to develop their entrepreneurial skills. This has included applications to the Royal Society of Chemistry’s Biological and Medicinal Chemistry Sector and the RSC East Midlands Local Section to support buying consumables, and applications for funding to attend to attend The Big Bang UK Young Scientists and Engineers Competition.

The dedicated work of 18 students over nine years has recently resulted in the synthesis of our target molecule, although final purification is now our challenge. You may well ask, why has it taken so long?

The answer is because we have been doing something new and, as with any research, we have hit our challenges along the way. The synthetic route has had to be modified and reagents changed. Key steps have been modelled before using up precious precursors.

Each new cohort of students starts at the beginning and needs to learn basic skills like how to keep a lab book and assess risks. They need to know practical skills, such as how to run thin layer chromatography, heat a reaction under reflux and purify a solid by recrystallisation, before attempting new research. 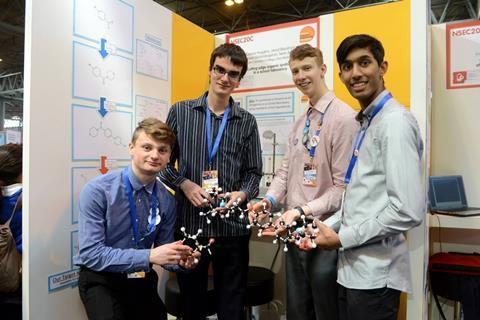 Each new group of students submitted their work for a gold CREST award after two years. It was usually at this point, reflecting back on the start, they realised how they had developed as scientists and what they had achieved.

Zoe Smallwood, a former student who worked on the project, felt ‘the content was challenging at times, but, in hindsight, this was an excellent introduction into the field of synthetic chemistry and what undertaking a research project entailed.’

She particularly enjoyed learning about spectroscopic characterisation of her reaction products, which she says, ‘proved very helpful as I could relate the theory covered in class to the practical examples from the project’.

‘My experiences of my gold CREST award were overwhelmingly positive and helped me decide to study for a chemistry degree’ says Zoe. ‘I would definitely recommend it to anybody interested in studying science post-18’.

In hindsight, the choice of target molecule proved to be the making of the project. There is some lovely chemistry associated with its synthesis which, through the years, has resulted in excellent conversations with students that have challenged and extended their understanding of A-level organic chemistry.

And as for that thrill I mentioned when you achieve something no-one has accomplished before? The day we received an email from analytical scientists at the University of Oxford confirming we had made the target molecule was a student’s 18th birthday. She didn’t know which to be more excited about. Goal accomplished, surely!

Tips for supporting your students to carry out a research project

The project would not have been possible without the help and support of Steven Mansfield, Ed Anderson and Jonathan Burton at the University of Oxford. I also thank the University of Leicester who have kindly run many a spectrum for us over the years and who donated the rotary evaporator.

Catherine Smith is a secondary school teacher at Hinckley Academy and John Cleveland Sixth Form Centre, an 11–18 academy in Leicestershire.