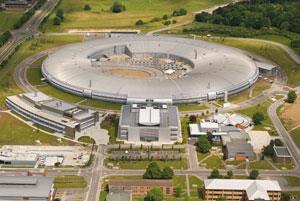 Investigating matter at the atomic and molecular scale presents huge technical challenges but reaps enormous rewards as we begin to understand form and function at the most fundamental level. One of the most powerful tools for exploring these new molecular frontiers is the synchrotron. This is a particle accelerator that produces high intensity beams of focussed light, ranging in wavelength from infrared to very short wavelength x-rays. The brilliance of this light, and the ability to tune and focus the beams with high precision, differentiates synchrotron light from that produced by conventional lab-based sources.

The UK's national synchrotron science facility is Diamond Light Source in Oxfordshire. Diamond opened in 2007 and can produce beams of light 10 billion times brighter than the sun, allowing experiments to be carried out that would not be possible in a normal lab.

Chemistry comes in many shapes and forms and the case studies here aim to give a snapshot of the type of research possible at Diamond. More detailed case studies from each of the beamlines are available from the Diamond website1. This will be updated with more in-depth information during 2011, to celebrate the International Year of Chemistry.

The synchrotron generates a beam of high intensity light. Once a desired wavelength or range of wavelengths of light has been selected from the synchrotron, the light is focussed into a tight beam. A sample is placed in the path of the light beam and the interaction between the sample and light can be detected.

How is synchrotron light produced?

Synchrotron radiation is produced by incredibly fast moving particles. At Diamond three particle accelerators accelerate electrons to an operating energy of 3 GeV. When these fast moving charged particles have their movement changed by magnetic fields, they lose energy in the form of light. 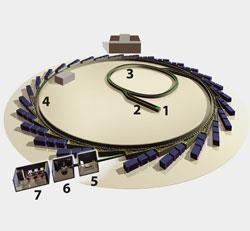 Electrons are generated by an electron gun (1), a technology analogous to the familiar cathode ray tube, and accelerated down a 30 m linear accelerator (2) to an energy of 100 MeV. This means that the electrons are travelling at close to the speed of light by the time they are injected into the next accelerator, the booster ring.

The booster ring (3) uses a radio frequency voltage source and accelerates the electrons from 100 MeV to 3 GeV - the operating energy of the facility. Once the desired energy has been achieved, the electrons are injected into the storage ring (4). This is a ring 562 metres in circumference where the electrons circulate and produce light as their direction changes. This light is then directed into the experimental stations.

Studying how the light interacts with samples can give us insights into the way matter is assembled. There are several key techniques in use at Diamond, which are linked by the common thread of investigating the interaction between light and matter.

In diffraction, and its linked technique, scattering, a detector picks up the light deflected by the sample. In the case of diffraction, the patterns produced from crystalline solids can be used to reveal the three-dimensional atomic structure of the sample. With scattering, information can be found on the structure and dynamics of systems on a slightly larger scale, looking at larger molecules and assemblies.

Diffraction is used to discover the 3D atomic structure of proteins, allowing scientists to understand their function and to identify potential drug binding sites for the development of medicines. The technique is also widely used outside of the life sciences, with small molecule diffraction being a widely used technique for structural determination of crystalline solids. Using synchrotron light gives scientists the ability to investigate very complex, small or weakly diffracting samples.

The high intensity and energy of the synchrotron light produced at Diamond makes it possible to perform imaging deep within structures. There is a range of imaging techniques which allow scientists using Diamond to create a 3D representation of the interior of their samples at the micro scale, without disrupting the sample. This is especially useful when examining stresses and strains which are only present when the sample is intact. This technique has further applications in cultural heritage, for examining precious samples which cannot be opened.

In all of the techniques used at Diamond Light Source, the samples are bombarded with photons of electromagnetic radiation. In spectroscopy, the energy of these photons is varied and by looking at how the sample reacts, either by absorption, reflection or fluorescence, the characteristics of the sample can be identified.

The technique of spectroscopy can be used to determine the elemental composition of samples as well as their chemical state and physical properties. So as well as larger molecules, individual atoms can be identified and reactions can be observed as they take place.

Crystal diffraction is a widely used technique to elucidate the atomic structure of molecules. It is particularly relevant in the development of new materials, where rapid structural determination on small or fragile samples can help in the process of material design.

Diamond has been used to investigate hydrogen storage materials, which could be used to store hydrogen in the next generation of cars. While hydrogen is seen as a valuable renewable, clean, future fuel source, storage is difficult. Systems are needed so that the gas can be carried safely at high concentrations without the need for high pressures or low temperatures.

A group from the University of Nottingham, led by Neil Champness, has used crystal diffraction at Diamond to investigate the structure of metal-organic frameworks2. These allow hydrogen to be stored through temporary adsorption onto the pore walls. These new materials can form crystals which are too small or fragile to examine in the lab. They are brought to Diamond for analysis as the light is much more intense and so the analysis is more sensitive.

A group of researchers at Reading University, led by Professor Mark Hodson, are exploring how earthworms cope with and process metals in their environment.

Earthworms can exist in soils which contain toxic levels of metal pollutants but it is not fully understood how this is achieved. By understanding the biology of how the earthworm processes these metals, scientists can offer new solutions for the decontamination of polluted areas. This will also allow us to develop better models of how toxic metals move through contaminated land and make clean up operations more efficient.

The team are examining the earthworms, the mucus rich linings of the burrows they create and the bulk soil around them to understand the movement and levels of metals in the environment. In each of these cases, the team have three key questions: how much metal is present? Where is it located? What form does it take?

To obtain this information, the team used several techniques in series. X-ray fluorescence allows the identification of relative metal concentrations. The image produced allows the team to select areas for further analysis. XANES (x-ray absorption near edge structure) or EXAFS (extended x-ray absorption fine structure) analysis of the areas of interest reveals the exact form of the metal of interest3.

'With the synchrotron, I can get information about the speciation of elements that I am interested in which I wouldn't otherwise be able to obtain' says Hodson. 'I can also do elemental mapping - this gives information about heterogeneity in samples whereas basic lab analyses would just give you bulk sample information. You can get the elemental mapping using other techniques but the synchrotron is often more sensitive and allows you to then home in on areas with a particularly interesting composition and look at speciation' he adds. 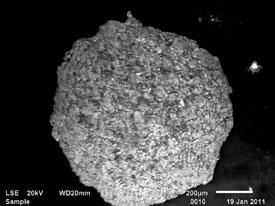 Earthworms secrete calcite granules at regular intervals and these granules have been found to contain amorphous calcium carbonate, an extremely unstable compound which is almost impossible to create and stabilize in the lab. The team are now working to understand the role that calcite granules may play in interacting with metals in the soil, as well as looking into their structure and stability.

Cultural heritage is a growing area of interest for investigation using synchrotron light. The small beam size and high intensity light can be used to examine small samples of precious materials with great precision. 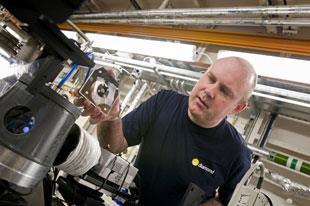 Analysis of timbers from the Mary Rose

Samples from the Tudor warship the Mary Rose, which had lain on the sea bed for almost 437 years, have been studied at Diamond to try and understand the process of the degradation of the wooden timbers at the molecular level.

Mark Jones from the Mary Rose Trust has been studying the timber samples, looking closely at the wood cells and some compounds of iron (from corroded cast iron guns and iron fittings such as nails and bolts) which had penetrated the structure.

Iron interacts with various sulfur compounds in the wood to form acids which destroy the timbers. Diamond has enabled Mark and his team to understand the interactions of the iron and sulfur within the timbers4. They are now able to develop conservation techniques to keep the ship in its iconic condition, and prevent further degradation in the future.

Infrared spectroscopy was also used at Diamond to examine silver leaf on 15th Century wood carvings from altarpieces and sculptures. The silver leaf often becomes tarnished, blackening and, in some cases, disappearing altogether over time.

A team from Spain, led by Nati Salvado at the Universitat Politecnica de Catalunya, was interested in discovering whether the method used to fix the leaf, or the sealant applied afterwards, was responsible for the tarnish. The team used a combination of x-ray diffraction and infrared FTIR (Fourier transform IR) techniques to identify and map the chemical composition of each layer of the sample with sub-millimetric precision.

This study5 revealed that corrosion was due to atmospheric reactions with the silver compounds, rather than a reaction with organic compounds found in binding layers or varnishes.

Using a synchrotron light source, as opposed to a lab-based source, gave the team the ability to map the chemical composition of each sample on a much smaller scale, and differentiate between the fine layers of coatings found in the artworks.

Funded jointly by the UK government and Wellcome Trust, Diamond is free at the point of access for researchers, provided the results are placed in the public domain. This work now generates several hundred research papers every year and the rate of publication continues to increase as the facility expands.

Diamond is also extensively used for industrial research and development by companies including Rolls Royce for aerospace and energy applications, Pfizer and GlaxoSmithKline for pharmaceuticals discovery and development, and Johnson Matthey on improved catalysts for emissions control.

Diamond is continuing to develop rapidly. A total of 18 beamlines are now operational, with four more under construction. Over 3000 researchers have used the facility. In 2010 the government confirmed further funding for Phase III expansion6, creating 10 more beamlines between 2011 and 2017, which will bring the total to 32 and enable even more advanced techniques.

There are a range of opportunities to visit Diamond with A-level students throughout the school year for details. There is also a range of downloadable simulations and linked problems, aimed at the A-level physics curriculum.

Diamond is developing content for chemistry and biology students throughout 2011 and would value any recommendations or suggestions from the teaching community.