Drug Discovery: metformin and the control of diabetes

Type 2 diabetes is a serious disease, and it's on the increase. The search for a treatment is a story that traverses the world and touches on the treatment of other diseases 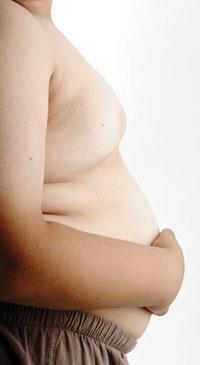 Obesity in children is an increasing problem

Two million people in England and Wales know they have diabetes; another 750 000 are yet to be diagnosed. Of these, 95 per cent have type 2 diabetes, which is associated with age, obesity and some genetic vulnerability. While in its early stages diabetes can often be controlled by a suitable diet and exercise, medication is often required to prevent weight gain and cardiovascular complications. The drug metformin is usually the first line of attack.1

Metformin (1) has an interesting history. Structurally it is a biguanide and as such it has connection with guanidine (2) and galegine (3), which can both be extracted from the plant goat's rue.

While treatment with goat's rue was found to lower blood glucose concentrations in diabetes, research to work out what chemicals in the plant where pharmaceutically active was slow to get off the ground in the early 20th century. This was mainly because the plant's effects were mild and introduction of insulin, effective for both type 1 and type 2 diabetes, in 1922 seemed to remove the need for it.

Traditional herbal remedies were still rather poorly understood in the early 20th century. In fact, as we shall see, it wasn't until an investigation of the effectiveness of goat's rue in treating an unrelated disease that the biguanides were identified as the pharmaceutically active chemical species. 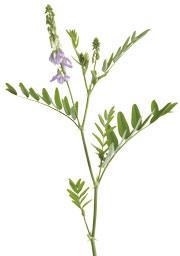 Malaria causes a characteristic recurrent severe fever, every third or fourth day, depending on the type of malarial parasite causing the illness. The classic treatment, and prophylaxis, for malaria was quinine, an alkaloid extracted from the bark of the South American cinchona tree. However it was expensive and some parasites became increasingly resistant to it. The supply of the drug - it was imported from Java - was also inconsistent during periods of global unrest.

By the 1930s, the search was on to find alternatives to quinine for treating malaria. During the second world war, a team led by chemist F H S Curd at the ICI laboratories at Blackley, Manchester, decided to work on compounds derived from pyrimidine (4). This was for two reasons. Firstly, it was known to be a constituent of nucleic acids and associated enzyme systems. Secondly, and perhaps more importantly, it had been incorporated in some sulfa drugs (notably sulfadiazine (5)) that were known to possess some weak antimalarial activity.

As new compounds were synthesised, they were tested on malaria-infected chicks. The more promising ones were then trialled on human volunteers. Unfortunately all proved too toxic to contemplate their clinical use. Rather than abandon the research, Curd wondered if just part of the pyrimidine moiety might be incorporated to give products with reduced toxicity, while retaining antimalarial activity. This proved correct, and success was achieved in 1945 with their drug Paludrine.2

Interestingly the right hand portion of the molecule has a distinct resemblance to galegine (2). Two years later, in 1947, animal studies showed Paludrine caused a slight reduction in blood glucose levels.

Flu in the Philippines

At the same time in the Philippines, molecules in that same biguanide class were being used by Eusebio Garcia, a locally eminent specialist in infectious diseases. He was treating patients suffering from influenza, as well as endemic malaria. He is vague as to how, in 1949, he got hold of what he termed 'a new synthetic' which he called flumamine. Reading Garcia's reports, you could be forgiven for thinking that he had discovered the molecule himself:

Flumamine [...] was first noted incidentally during the course of biological tests of a number of biguanide derivatives on malaria patients. It happened when the writer, out of curiosity, tried it out on a case of cerebral form of influenza3

Garcia reported a near-miraculous cure. Some 30 flu patients were relieved of their headaches and cured within 24 hours by a single flumamine injection. He speculated on its possible mode of action:

Flumamine is very similar to polymethethylene diguanides in that both of them have the biguanide groups. Since the polymethylene diguanides have the unusual physiological property of lowering the blood sugar, it is possible that flumamine has the same pharmacology ... If it can lower the blood sugar to the minimum physiological limit, it can destroy malarial parasites by attrition.3

He provided no experimental evidence for this speculation and indeed, no blood sugar levels were measured in his patients. The polymethylene diguanides (6) to which he refers had been introduced in 1926 to treat mild diabetes.4 It was hoped that attaching a long carbon chain would render the compounds less toxic, whilst maintaining the hypoglycaemic effect of the guanidine groups. However, they weren't non-toxic enough. Their debilitating effects on the liver led to them being withdrawn in the early 1940s.

The scene now returns to Europe, and to Paris, where Jean Sterne was a physician specialising in diabetes. As a student he had worked with galegine, which had proven poorly tolerated by patients and of limited efficacy. Spotting Garcia's comment that his flumamine reduced blood sugar concentration and, presumably, the absence of reports of adverse patient reactions from its use, he decided to explore its potential for treating diabetes. In 1957 Sterne reported cautiously but positively on what he found:

Chronic toxicity is practically nil. Rabbits, rats and dogs treated with the product over six months showed no deterioration in their growth and there was no decrease in their hepatic [liver] function. Autopsies showed no anatomical damage [... and flumamine] has a powerful hypoglycaemic effect, both with subcutaneous and oral administration [...] one can bring the blood sugar down practically as low as one wants.5 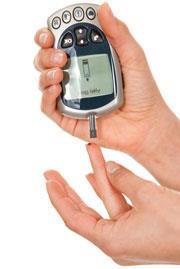 A medical look at diabetesSince the early 1960s diabetes has been classified either as type 1 or type 2. The less common type 1 results from the auto-immune destruction of the cells in the pancreas which produce insulin. It occurs most commonly in adolescence or early adulthood, which gave rise to its earlier name of juvenile diabetes. The absence of insulin causes glucose levels in the blood to rise, sometimes above 20 mmol dm-3 (a normal reading would be 5.0-6.0 mmol dm-3, before a meal). Injections of insulin can restore normal levels of glucose. Before this treatment it was a progressive disease which was usually fatal.

Type 2 diabetes is associated with older patients, particularly those who are overweight. It arises either because the pancreas is not producing enough insulin, or because the body cells do not respond appropriately to the insulin that is present. This is the form that is treated with metformin or other oral hypoglycaemic drugs.

The symptoms of both forms of diabetes are similar (and include tiredness, extreme thirst and related copious urine production). The onset of type 2 is more insidious, and patients are often unaware of their disease, even for some years. Persistently high blood glucose levels predispose individuals to heart attacks, kidney damage and can cause blindness and nerve damage, particularly in the extremities. Poor sensation in the feet, for instance, can lead to minor injuries, such as stubbing the toes, going unrecognised. Infection, combined with poor circulation typical of poorly-controlled diabetes, means that healing is difficult and at times can lead to amputation. Indeed there are about 100 diabetes-related amputations each week in the UK. Many of these problems can be prevented by early diagnosis, good blood sugar control and good self-care.

Type 2 diabetes and obesity are undeniably linked, but exactly how remains unclear. There is serious concern that the rising tide of obesity throughout society, and particularly among young people, will lead to an even bigger epidemic of diabetes in the future.

Although Sterne published in a relatively little-known journal, news of an effective oral alternative to insulin for some forms of diabetes spread rapidly. Indeed, the drug, soon renamed metformin, possessed a significant advantage over insulin, at least for treating type 2 diabetes. Insulin injections have to be carefully balanced against carbohydrate meals. If someone with diabetes takes their insulin but misses their meal, their blood sugar becomes dangerously low, causing a coma. If this is prolonged it can have very serious consequences. However metformin, though effective in reducing blood glucose levels, does not reduce them in humans enough to cause a coma.

Was metformin as promising as Sterne's 1957 report seemed to show? The first systematic UK evaluation appeared in 1962 and involved 39 patients.6 All but two were over 30 years old, with 28 being over 50, so most subjects in the trial probably had type 2 diabetes. The conclusions from the study of six months' treatment were:

As we've seen, it's not clear how Garcia got hold of his metformin (or flumamine as he called it), but the chemical itself was first reported in 1922 by the Dublin chemists Emil Werner and James Bell. They had previously found that dicyanodiamide (7) was a useful precursor to guanidine derivatives.7 If the dicyanodiamide is simply reacted with the dimethylammonium chloride in acidic conditions for 3-4 hours, then dimethyldiguanide (that is, metformin) is formed in good yield. At this stage the chemists had not realised the pharmaceutical potential of the chemical they had made.

Today, metformin is the most widely used drug to treat type 2 diabetes, and is one of only two oral antidiabetic drugs on the World Health Organization (WHO) list of essential medicines. However, we still do not completely understand its mechanisms of action. As well as its effects on blood glucose, it also affects lipid levels in the blood. This has led to exploration of its protective effects against the adverse metabolic effects of some antipsychotic drugs, which can increase both glucose and lipid levels and often increase weight. It may also have a role in treating polycystic ovarian syndrome which can cause obesity and infertility.