Evolution of the chemistry curriculum

There are dozens of different chemistry undergraduate degree programmes available, and hundreds of combined honours courses with a chemistry element. Given the breadth of chemistry it is therefore not surprising to find that no two programmes are quite the same. However, the core content is largely similar at all institutions, including topics such as thermodynamics, kinetics, main group elements, transition metals and organic structure and mechanism.

These core topics have, however, evolved over the decades, largely due to advances in our knowledge of chemistry. There are also two other major reasons for changes to undergraduate chemistry courses: evolving A-level content and different aspirations of those entering degree courses.

One of the most obvious changes to undergraduate chemistry courses in the past 70 years is the approach to chemical analysis. In the distant past, the only analytical tools available to chemists were so-called 'wet methods', which necessitated laborious experiments to establish the presence or absence of different functional groups. During the second world war a substantial amount of money and time was invested in developing infrared (IR) spectroscopy. As a result, spectrometers became more efficient, both financially and analytically, and after the war, the technology was rapidly adopted by industry. By the late 1950s, the cost of spectrometers was low enough that universities could install and run their own IR facilities, initially to support research endeavours.

The introduction of IR spectroscopy into the undergraduate laboratory came later and transformed practical courses. The need for analysis using wet methods was virtually eliminated, vastly decreasing the time needed to identify products. This allowed the focus of lab time to switch to synthesis, with analysis carried out by a quick run through suitable spectrometers. Students commonly use IR and ultraviolet-visible (UV-Vis) spectrometers themselves in a hands-on fashion, while mass spectrometry (MS) and nuclear magnetic resonance (NMR) data are normally collected by submission of samples to a service.

The introduction of spectrometry into undergraduate courses also allowed graduates to enter the workplace with experience of techniques and subsequent data interpretation that they would be likely to use routinely in the industrial laboratory. Another reflection of the importance of analytical methods is the fact that all A-level students learn about the key techniques of MS, IR and NMR, although the underlying theory is normally not examinable. The focus is instead on data analysis.

Chromatography is a very basic, yet incredibly effective, method for separating mixtures, and comes in many different forms. In the early 20th century the process was known and carried out occasionally as paper chromatography, but its full potential had not yet been realised. In the 1940s, however, various different techniques were developed, opening chromatography up to a wider variety of applications.

The development of thin layer (TLC) and column chromatography had particular significance both in industry and in the undergraduate course. Column chromatography allows for rapid separation based on the affinity each component has for the stationary and mobile phases used. This allows the isolation of individual products, making subsequent analysis quicker and easier. Before column chromatography was developed, there was no efficient way of separating and identifying the individual components in a mixture of products.

Prior to the 1950s, TLC plates were expensive and difficult to manufacture to consistent standards. During the 1950s, TLC plates were redesigned and put into mass production, bringing down the cost of the process and making them affordable enough for use in the undergraduate laboratory. By the end of the 1960s, TLC was relatively common and is now used across undergraduate labs to determine whether a reaction has gone to completion or not. Today, even A-level students are required to have knowledge of different forms of chromatography.

Away from the practical course there have also been significant changes in the methods used to teach theory. One of the most interesting is the introduction of curly arrows in the teaching of organic theory. In 1953 Christopher Ingold published a historic text setting down the fundamental principles of organic chemistry as we see it today. Prior to this publication, organic reaction mechanisms were largely learnt by rote, but Ingold's method of using curly arrows to depict the movement of electrons throughout a reaction mechanism was to become the accepted standard. In current courses, all organic chemistry theory is taught from the perspective of electron movement, helping students to develop a deeper level of understanding and enabling them to predict the outcome of unseen reactions.

A-level students are also expected to be able to use curly arrows to illustrate how reactions such as nucleophilic substitution progress, which is valuable preparation for further study. However, there is a danger that exam boards are focusing the minds of students on the precision of their drawing rather than their understanding of the underlying theory. This has the ironic consequence of encouraging them to memorise a diagram rather than getting to grips with the fundamental concepts, undermining the rationale behind Ingold's seminal contribution. 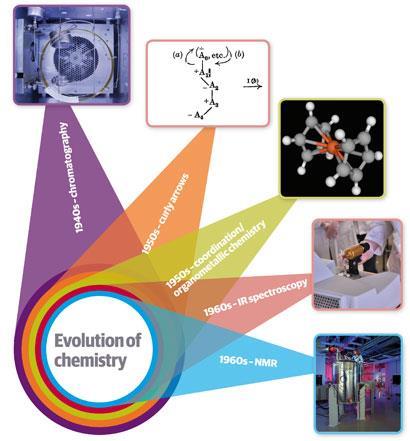 Organometallic chemistry developed at a dramatic pace at the research level during the 1950s and 1960s, leading to great changes in the subsequent delivery of undergraduate courses. The core course taught today bears only a small resemblance to that of 70 years ago.

One of the biggest changes in the syllabus aligned with the inorganic strand is the teaching of coordination chemistry, which was also linked to developments in organometallic chemistry. Scientists had been aware of unusual coordination geometry, for example Zeise's salt and ethylene ligands, for many years without being able to shed light on the structures of such compounds. Many suggestions were put forward for which there was no real evidence, and the absence of techniques such as x-ray crystallography made this a far greater challenge than it would be today.

In 1952 a group of chemists at Harvard University proposed a structure for an aromatic, side-on coordinated iron bis-cyclopentadienyl compound, or ferrocene as it is better known. IR spectroscopy provided further evidence for the proposal, and this helped to narrow down the possible structures for Zeise's salt. A whole new branch of chemistry had materialised that would have ramifications in many different areas of the subject. The later development of highly selective reactions and coupling processes mediated by organometallic compounds has revolutionised organic synthesis and medicinal chemistry, and has opened the door to the synthesis of compounds of complexity that would have been unimaginable a few years ago.

Not surprisingly, this has had a huge impact on undergraduate degree programmes, with courses on organometallic chemistry becoming commonplace, and senior level modules in organic synthesis being packed with synthetic routes that are underpinned by this work. Organometallic chemistry is a topic that overlaps both inorganic and organic chemistry, and the content of such courses at different institutions has often depended on whether it is taught from an inorganic or organic perspective. In today's era of interdisciplinary chemistry, this is much less of an issue.

Another important role for organometallic compounds is as catalysts in the production of polymers. As graduates were expected to be able to cope with the demands of industry, the ability to understand polymer chemistry (a rapidly expanding area at this time) was essential. Since then, the polymer revolution has impacted on nearly everyone on the planet, although not always in a positive manner. As such, polymers have been taught at both GCSE and A-level for some time now, with an increasing emphasis in recent years on the environmental consequences of their use and disposal.

In fact, the growth of green chemistry as a focus for both industry and academia is increasingly reflected in curricula at both university and school level. One key area is the use of catalysts to cut the energy demand of industrial processes and to reduce the amount of waste produced. Much of this work is underpinned by the pioneering organometallic chemistry of the 1950s and 1960s, illustrating the lasting impact that this work has had at all levels of education, and indeed on wider society.

There is always some delay between discovery in research and inclusion in the undergraduate course, and typically a further delay prior to inclusion at A-level. However, lecturers and teachers with a passion for their subject do often share cutting edge developments with students before they are officially included in a syllabus.

As well as modifying the content and structure of the course to include new discoveries and cater for the needs of industry, the undergraduate degree must also adapt to account for changes in pre-university education. Seventy years ago, having maths and physics to A-level standard was a compulsory prerequisite for an undergraduate chemistry degree. In the 1960s the government published a report designed to raise the participation rate of higher education. With an increase in funding providing many more facilities and places, universities removed physics as a prerequisite. As a result, extra modules in physics were introduced to the first year of the undergraduate course to accommodate all entrants and ensure that the final standard of the degree remained the same.

A similar trend can now be seen with the introduction of Maths for Chemists courses into degree level teaching, which help to plug the gap for those arriving without A-level maths. Interestingly, after many years where maths A-level was not a pre-requisite for entry onto chemistry degree programmes, increasing numbers of universities are now insisting on it. This is perhaps a reflection of a need for increased selectivity in the light of the recent boom in applicants to chemistry degrees.

It has become clear in recent years that there is some degree of grade inflation at A-level standard. This has been accompanied by a reduction in content arising from modularisation and the accompanying loss of teaching time. Students joining degree programmes today are just as bright as their predecessors, but there has clearly been some decline in their prior knowledge. Subsequently, there has been a movement of material from A-level into the degree course, with one goal of the first year of a programme being to ensure that all students are at the same level prior to progression to the second year. Add to this the demands from industry for graduates of the highest calibre, and it can be seen that there is a strain on those designing degree programmes who need to ensure the delivery of increasing amounts of content.

Requirements of the graduating class

Another major reason for the evolution of undergraduate chemistry degrees is the need to suit the evolving requirements of the students taking the courses. In the 1930s to 1950s chemistry was largely a vocational degree with most graduates going on to become hands on chemists. Today, a far higher proportion of chemistry graduates are going into careers outside of chemistry, with a chemistry degree being viewed as providing a good skill set for a wide variety of jobs.

However, with a diminished supply of chemists - only just meeting demand - there is good reason to assume that the courses will need to change again, reverting once more to preparing graduates for a career in chemistry.