From LCDs to medical materials 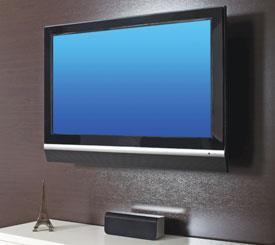 The influence of Liquid Crystal Displays (LCDs) on modern society has been dramatic. LCDs are now almost ubiquitous in electronic goods ranging from control instruments (eg thermostat controllers) to PC monitors and increasingly in large area high definition display devices. LCD sales revenues topped $100 billion in 2008 and are forecast to reach $150 billion by 2012.1 However, the success of LCDs during the last decade has also led to a noticeable amount of LCDs entering in the waste electrical and electronic equipment (WEEE) waste stream. It is estimated that 2.5 billion LCDs are approaching their end of life and LCD WEEE is the fastest growing waste stream in the European Union. Legislative measures are in place to reduce the amount of electrical and electronic waste sent to landfill,1 and the WEEE Directive 2002/96/EC of the European Parliament and of the Council on Waste Electrical and Electronic Equipment requires the disassembly of all LCDs with an area greater than 100 cm2 and those containing mercury backlights.2

Today, an increasing number of LCD displays containing mercury backlights are entering the waste stream. Once the backlight has been removed a LCD is rendered 'safe' and may be sent for incineration or landfill,2 but both these options waste resources and are potentially hazardous to the environment. In the UK alone it is predicted that over 10 000 metric tonnes of LCD will have been recycled in 2010. This equates to 9 tonnes of liquid crystals; 900 kg of indium and 8000 tonnes of optical quality glass that could be recovered but are currently being lost in landfill or incineration.1 Although extraction of liquid crystals with volatile organic solvents such as dichloromethane offers a short term solution, using such highly toxic and potentially carcinogenic solvents is not a "sustainable" long term solution to the problem. Developing a holistic and environmentally acceptable strategy for the recovery and reuse of liquid crystals and other materials from LCD panels is key to successfully utilising this valuable waste stream.3 The development of new materials from waste electrical and electronic equipment (WEEE) is viewed as part of that strategy. Herein, we demonstrate that low value polymers from LCD can be recovered and transformed into materials with potential medical applications.

What is in an LCD panel?

Liquid crystals are special organic molecules that do not directly melt to the liquid state upon heating but instead exhibit an intermediate state of matter termed a mesophase (Fig 1).2 Liquid crystals have many unique properties - fast response to electrical fields, elasticity and ability to modulate polarised light - that underpin their modern-day success, and they have now surpassed cathode ray tube (CRT) devices in many like for like commercial applications such as computer monitors and large area flat-panel televisions because of their low power consumption, and lightweight, portability and flat-panel construction.

Melting behaviour of a classical solid and a liquid crystal

The basic construction of an electro-optical LCD device (Fig 2) comprises a thin film of liquid crystal sandwiched between two glass substrates - a thin-film transistor (TFT) and a colour plate - whose inner surfaces have been coated with a transparent electrical conductor, indium tin oxide (ITO), to allow a voltage to pass across the medium (Fig 2). The liquid crystal sandwich, or cell, is then itself sandwiched between polarizers.

Basic construction of an electro-optic LCD device (side view)

Nematic liquid crystals can align in one dimension and act as a polarization filter. In the liquid crystal cell the molecules are pre-aligned in one direction by alignment layers (polyimide, approximately 10 nm thickness), coated on the inner surfaces of the glass. When an electrical impulse is applied, the nematic mesophase aligns with the applied field, altering the direction that the liquid crystals polarise the light. Because polarisers are also attached to the outer surface of the glass substrates the light entering the LCD is already polarised and changing the alignment of the liquid crystals with respect to the external filters dictates the appearance of the display. These external polarising films are typically comprised of a layer of iodine doped polyvinyl-alcohol (PVA) sandwiched between two protective layers of triacetylcellulose (TAC) and this PVA can be recycled.3

PVA recovery and use 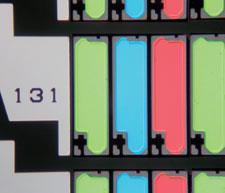 Polyvinyl-alcohol (PVA) is a versatile, environmentally-benign and readily available commercial polymer, used in many applications from adhesives to state-of-the-art large area LCD televisions.

In 2006, global consumption of PVA exceeded one million metric tons,4 and, as many consumer goods reach their end of life, PVA is becoming more evident in the polymer waste stream. However applications of this waste material are limited.

Although PVA is not a major environmental hazard, wasting it consumes a non-renewable resource. Reuse in new LCDs is unlikely, so we need to find new applications for this plastic to avoid turning a useful material into a burden on the environment. Interestingly, due to the inherent biocompatibility of PVA, it may be ideally suited as support material for enzyme immobilisation, tissue scaffolds or as drug delivery systems.5 But while such applications require a high substrate surface area, virgin PVA has a low surface area (<1m2 g-1) and so PVA needs to be expanded before it can be used in medical applications.

The expansion of naturally derived polymers such as starch to produce high surface area materials has been known for many years and can result in surface areas of 180 m2 g-1.6 The expansion of starch involves three stages: gelatinisation, reorientation by cooling (retrogradation) and dehydration (via solvent exchange), during which the amylose and amylopectin polymer chains re-organise in to a structure with pores of between 2 and 50 nm, a mesoporous structure (Fig 3). 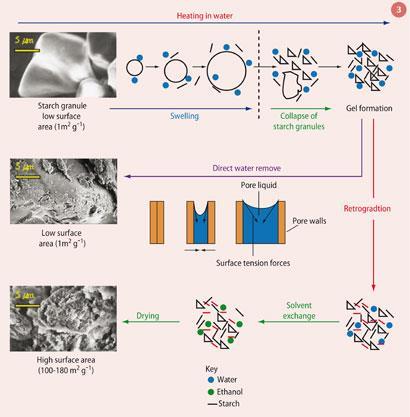 Schematic of gelatinisation, retrogradation, solvent exchange and drying from starch

This expansion process has now been applied to the synthetic polymer, PVA.3 Initial studies showed that treating the PVA in water using a microwave gave a gel, which gave a material with limited surface area (15.2 m2 g-1) after precipitation, washing with more ethanol and drying. By adding a retrogradation step to increase the crystallinity of the material, the surface area increased to 24.1 m2 g-1 but this is still quite low.6

To increase the structural organisation of the virgin PVA solution and hence its surface area we tried adding iodine because iodine forms a blue complex with polymers, including starch and PVA.7 Two structural models have been proposed - the helical and aggregation models,8,9 - and although there is still some discussion over the actual nature of this complex, there is little dispute that linear polyiodine ions such as I3- and I5- form as the iodine interacts with the free hydroxyl groups of PVA.10 One possiblity is that two networks are formed, a PVA polymer chain network and a fibril network.11 It has been suggested that microfibrils consist of crystalline lamellar and amorphous regions alternatively stacked between these microfibrils. It is believed that amorphous layers in the lamellar structure contain tie chains that interconnect the crystallite and as such PVA-iodine complexes act as junction points between PVA microfibrils in the network.11 The resulting effect of forming PVA-iodine complexes is that they contribute to the structuring of the microfibrillar network. As such the formation of PVA-iodine complexes is believed to better mimic the restructuring that occurs during retrogradation in the starch expansion process. Therefore, iodine was added to two virgin PVA solutions immediately after microwave heating, in an attempt to improve surface area and better mimic the structural changes that occur in starch expansion. The first PVA-iodine solution was immediately precipitated in to ethanol forming a yellow material with low surface area (12.4 m2 g-1). The second PVA-iodine solution was retrograded for 6 hours, thereby forming a dark blue gel indicative of a PVA-iodine complex. The resulting gel was precipitated in to ethanol yielding a blue material possessing an enhanced surface area (87.2 m2 g-1, Table 1), and high total pore volumes (0.33 cm3 g-1, Table 1), showing greater microporosity and mesoporosity. By further process optimisation it was possible to expanded virgin PVA to a surface area of 143.1 m2 g-1 (Table 1).

These optimised conditions are: heating by microwave irradiation at 180°C for 10 minutes, addition of iodine solution, retrogradation at 4°C for 12 h followed by precipitation in ethanol and three ethanol solvent exchanges. This led to formation of a synthetic polymer with similar porous structure to that of expanded starch. The use of waste LCD polarisers may provide a cheap and abundant source of PVA, which already contains iodine essential for expansion. On applying the optimised expansion conditions to LCD PVA it was possible to obtain an expanded form of the material, with no need for additional iodine solution. Porosity measurements of the LCD expanded material (Table 1) gave a surface area of 95.0 m2 g-1 (Fig 4). 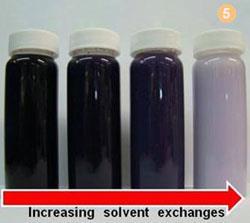 Typically for the starch expansion process, the surface area increases with repeated washings with ethanol,6 but while the same pattern is observed for PVA for the first three washes, thereafter the surface area decreases. It is known that solvents such as propanol can bond with hydroxyl groups in PVA, thereby disrupting the intermolecular hydrogen bonds and inhibiting gel formation10 and as PVA-iodine complex formation is dependent on the formation of aggregates it is possible that excess of ethanol disrupts the micro-structure in PVA and therefore hinders expansion. Initially, longer polyiodine chains such as I5- are formed in the PVA-iodine complex but on exposure to an aqueous alcoholic solution these I5- chains are broken down to form shorter I3- chains - in good agreement with the colour changes of the material (from blue to purple to pink) during solvent exchange (Fig 5). Use of a polar aprotic solvent such as acetone as an exchange solvent led to a substantial loss in surface area. The optimised PVA expansion has several benefits over the starch process including significantly shorter retrogradation times and fewer solvent exchanges, thereby reducing the amount of energy required for refrigeration and disposal or purification of the aqueous ethanoic waste.

Recycling PVA from LCD screens requires no additional iodine and produces an expanded material with a high surface area (95.0 m2 g-1) and total pore volume (0.56 cm3 g-1). These materials may find use in a wide range of applications, particularly as tissue scaffolds due to the high surface area and biocompatibility of both PVA and iodine. The effect of additives and small molecules present in recycled material is the subject of continued investigation with regard to their use in biomedical applications.

Potential for the future

Two of the greatest challenges that face our society are the rapidly declining amount of raw materials to feed our product supply chains and the escalating value of waste resulting from our profligate use of these products. We have become used to the idea of running out of traditional (fossil) sources of carbon, but we also need to deal with an imminent critical shortage of other key elements including indium, antinomy and gallium, shortages that will become even more acute as the number of consumers in developing nations such as China and India grows. These increasing populations will also produce greater volumes of waste, generating an enormous pollution burden and in many cases a health threat. The answer to both these problems lies in our attitude towards products at the end of their useful life. Instead of seeing waste as a problem to be solved, we should use them as a resource: today's waste can be tomorrow's raw material. WEEE is an excellent example of this; we currently perceive WEEE as a massive problem in terms of volume and the leaching of toxic metals, but we should start looking at it as a source of materials such as polymers and of valuable elements such as indium.

We have made a little progress in using WEEE as a source of materials by showing how a green technology can be used to extract valuable chemicals and how a recovered low value plastic can be turned into higher value materials for new and important applications.