From waxes to riches

Supercritical carbon dioxide can be used to remove valuable chemicals, including waxes, from plants, the most widely available and cheap source of biomass in the world 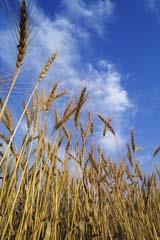 Much of the economic growth in the 20th century can be attributed to the availability of cheap oil. While most people recognise oil as a primary source of fuel and energy, its importance to the manufacture of chemicals, including pharmaceuticals and polymers, is less well appreciated.

Over 90 per cent of the synthetic organic chemicals used in the world today come from oil and other fossil resources (gas and coal).1 The production of these chemicals from non-renewable resources comes with another cost - the entire chemical sector produces about 1 billion Mt or 4 per cent of global carbon dioxide emissions worldwide as a result of the processes used.

Reducing the dependence of the chemical industry on fossil-based resources would both increase the lifetime of what petroleum is left in the world and reduce the effects of global warming and pollution. Furthermore, if we could find more local sources of carbon that could feed the chemical industry, we would reduce our dependence on foreign oil - a dependence that can only become more expensive and more politically problematic.

So what source of carbon is renewable, abundant and widely distributed across the planet?

The answer lies in plants, including trees, grasses and crops. The amount of renewable carbon or 'biomass' produced on the Earth every year is 170,000 million Mt (see Box 1).2  About one third of this is in the form of grain, another third is wood and the balance is made up of oilseeds, sugar (cane and beet), fruit etc. Remarkably, only about 3 per cent (6000 Mt per annum) of this is actually cultivated, harvested and used as food and non-food products.

Even allowing for a substantial growth in demand for food, including further growth in the world population, Nature turns over enough carbon for the entire chemical industries as well as for food and feed, and still leaves a substantial amount for other applications such as construction and biofuels.

The biomass is synthesised by plants using carbon dioxide, water and nutrients from the land as feedstocks and solar energy to drive the chemicals forward. The basic reaction used by plants to manufacture carbohydrates such as starch is:

Numerous carbohydrates are produced depending on the type of plant. Many more chemicals are manufactured by plants including proteins, lipids (including oils, waxes and fats) and nucleic acids. 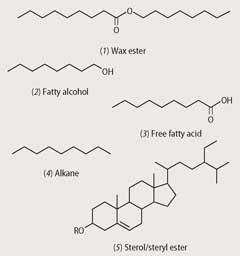 Wheat straw is a good example of a low-value, high-volume agricultural byproduct that can be used as a source of consumer chemicals. Wheat straw is coated with 'waxes', which protect the plant against fungi and bacteria and which are equally valuable to us.

These waxes are a complex mixture of fatty acids, fatty alcohols, alkanes, sterols (steroid-based alcohols) and wax esters (see for example, structures (1)-(5)). Such compounds are the basis of many cosmetics, including lipsticks. In addition, some have value as stand alone products.

Long-chain alcohols (also known as polycosanols) and sterols, for instance, have been proven in a large number of clinical studies to exhibit significant cholesterol-lowering properties.3,4 They are capable of acting on plasma cholesterol via two independent mechanisms and could be used, alone or in combination, to prepare dietary supplements or food additives that can reduce cholesterol levels in the human bloodstream.

Furthermore, the long-chain alkanes present in wheat straw wax exhibit excellent insect repellent properties and could be used as an environmentally-friendly alternative to traditional insecticides.5

Plant waxes are traditionally extracted by volatile organic solvents, including hexane, chloroform, dichloromethane and benzene. This method has many disadvantages:

For the extraction of wheat straw waxes to be sustainable, an environmentally-benign technology must be used. Supercritical carbon dioxide (scCO2) - which has been shown to be an excellent solvent for waxes - is a potential alternative to unselective and wasteful organic solvent extraction.

Extraction of biomass with liquid or supercritical CO26,7

A supercritical fluid (SCF) is a substance above its critical temperature (Tc) and critical pressure (Pc), where the distinction between liquid and vapour phases ceases to exist (see Box 2). The physical properties of a SCF lie between those of a liquid and a gas (see Table 1).8 SCFs show particular promise as solvents for extracting a wide range of chemicals. Their densities are high enough to allow good solubility while their diffusivities are 10 to 100 times higher than those of other liquids, which improves mass transfer and reduces extraction times. In addition, their low viscosity enables them to penetrate into plants and extract the compounds of interest.

The CO2 molecule does not have a dipole moment because of the linear, symmetrical arrangement of the constituent atoms. The lack of a dipole means that liquid CO2 behaves like a non-polar solvent, and indeed liquid CO2 is comparable with hexane, and only dissolves non-polar compounds.

However, in the supercritical state, especially at high pressure (and therefore high densities), CO2 behaves more like a polar solvent. This is a very useful property of CO2 - its solvating power can be manipulated by simply altering the pressure and temperature. Thus non-polar and slightly polar molecules are readily soluble in liquid CO2. Examples include terpenes and short-chain carboxylic acids.

Supercritical CO2 at pressure of ~ 20-40 MPa is a good solvent for many pharmacologically- or industrially-valuable molecules, such as the antimalarial compound artemisinin. Higher polar compounds are not normally soluble in CO2. However, at high pressure (60-100 MPa) the polar polyphenol xanthohumol (a potential anticancer compound) can be extracted by using supercritical CO2.9 (It is worth noting that supercritical CO2  extraction uses captured CO2 and is thus a potentially good use of a waste product.)10

A typical supercritical CO2 extraction plant is shown in Fig 1. CO2 is pumped through columns containing the material to be extracted. The pressure, temperature, flow rate and residence time of the CO2  can be controlled to optimise both the extraction selectivity and yield. Supercritical CO2 laden with dissolved extract leaves the extraction columns and passes through a reducing valve. After this point, the reduction in pressure causes a decrease in solubility, and the extract precipitates within the separator. Careful manipulation of the pressure can result in selective precipitation - for instance a two-stage pressure reduction can be used to fractionate less-soluble and more-soluble components. The carbon dioxide is then re-compressed for further extraction cycles. 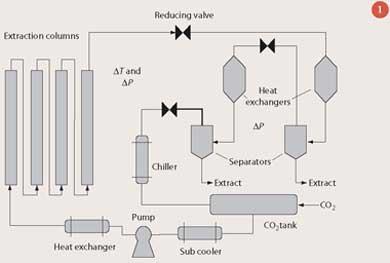 What sets liquid and supercritical CO2 apart from conventional solvents such as hexane and ethanol are two key properties. First, a solvent-free extract is produced since the CO2 is released as a gas at the end of the process. The extracted (spent) material is also free of solvent and thus available for further processing. Secondly, because the solvating power of the CO2 can be altered by changing the extraction temperature and pressure, this enhances the selectivity of the process. This in turn reduces the need for subsequent purification and extraction steps.

A supercritical fluid (SCF) is a substance above its critical temperature (Tc) and critical pressure (Pc). The critical point is the highest temperature and pressure at which a substance can exist as a vapour and a liquid in equilibrium. The best way to explain the self-phenomenon is by a phase diagram such as the one for carbon dioxide. 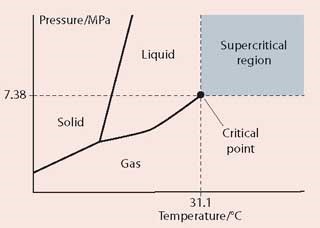 The critical point for CO2 corresponds to a pressure of 7.38 MPa and a temperature of 31.1°C 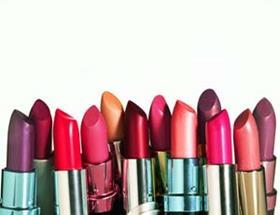 Getting valuable waxes from plants

At the University of York, we have shown, on the laboratory-scale, that the selective and complete extraction of wheat straw waxes can be achieved using supercritical CO2.11, 12 Subsequent scaling up in collaboration with Botanix, a Kent-based company which specialises in extraction and purification of chemicals from plants using liquid or scCO2, allowed us to isolate sufficient quantities of materials for product testing and preparation of formulations (eg lipsticks). This latter work was done in collaboration with a cosmetic company keen to identify greener products for their existing markets.

The ability of tuning solvent strength (from gas-like to liquid-like) and thus tailoring wax properties by simple manipulation of the temperature and pressure represents a tremendous feature of supercritical fluid technology that no other extraction method can claim. Our research has demonstrated that by a one-step extraction and stage-wise change of pressure and/or temperature, wheat straw waxes can potentially be fractionated into high-value fractions including polycosanols, sterols and long-chain alkanes as well as waxes with different physical properties. The patented fractionation method developed in this study has competitive advantages over conventional methods since one fractionation step, as opposed to several unit operations, is used.

In addition, this method does not leave any solvent residues in the final products, nor generate additional waste streams requiring subsequent disposal. Following the extraction, the remaining bulk of the material can be converted into a wide range of chemicals, materials and fuels including paper, strawboard, and bioethanol.

Other chemicals from plants

With environmental, economical and social pressures mounting, industry is beginning to look to renewable biomass as a resource to create chemicals and materials as well as energy (ie biorefinery concept).13 The biomass can be used directly for making chemicals and materials, eg the polymer polylactic acid (poly(2-hydroxypropanoic acid)) made from cornstarch.

Polylactic acid or PLA is probably the world's most successful biodegradable polymer made entirely from renewable resources. PLA has many proven uses, including films and fabrics as well as packaging, and PLA products (eg  water bottles) are now on the market in Europe. NatureWorks in Blair, Nebraska, US, produces more than 140,000 tonnes (300 million pounds) of PLA per year.

Alternatively, biomass wastes from energy and food industries (eg  the use of glycerol, a byproduct of biodiesel manufacture to make other chemicals such as epichlorohydrin) can be used. Epichlorohydrin is used in the manufacture of polymers and composite materials.

Traditionally, epichlorohydrin has been made in a multi-step process from propene, one of the most important petrochemicals. However, the rapidly growing availability and rapidly falling price of glycerol, owing to its production in the manufacture of biodiesel, makes it an attractive starting material for many other chemicals including epichlorohydrin (see Scheme 1). Solvay recently launched the first industrial unit for producing epichlorohydrin from glycerol in Tavaux (France). The plant is fed with glycerol derived from rapeseed oil and has an initial capacity of 10 kilotonnes per year, which could be easily expanded in response to market demand.

Whatever the feedstock, it is important that the conversion methods we employ to make chemicals and materials conform to the best green chemistry practices. Only in this way can we ensure that the products have green and sustainable supply chains.

If we can successfully move from a non-renewable source of carbon towards a plant-based renewable one then we can create a closed loop for carbon with a cycle time of less then 100 years. This makes a striking contrast with the current situation where we are consuming over little more than 100 years' of a resource that took the Earth about 50 million years to produce.

Professor James Clark is director of the Green Chemistry Centre of Excellence at the University of York, York YO10 5DD; and Dr Fabien Deswarte is a senior researcher at the Centre

We thank Dr Yannick Ford at Botanix for his information on supercritical CO2 extraction.