Axe Valley Biodiesel - a case study on partnership between school, university and business 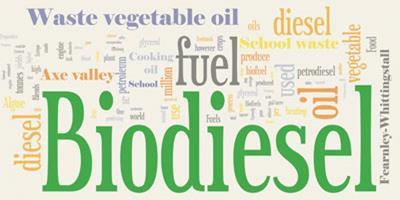 A chance meeting in a village pub between Clive Butler of the University of Exeter and Andrew Colville, a teacher at Axe Valley Community College, led to an exciting and unique collaboration between the school, the university and local businesses. Colville had a vision of pupils setting up and running a business that sold biodiesel that they produced themselves within the school from waste vegetable oil - taking science out of the classroom and into the real world. In January 2009, Axe Valley Community College and the University of Exeter's school of biosciences were awarded a Royal Society Partnership Grant1 and the project became a reality. But the hard work had only just started.

Vegetable oil can be converted to biodiesel using base catalysed transesterification - converting triglycerides to methyl esters using methanol and producing glycerol as a waste product - a straightforward enough reaction to carry out in any school chemistry lab.2 But converting 100 litres of oil into biodiesel in the playground is another matter entirely. 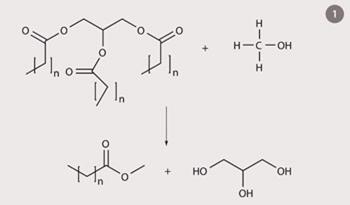 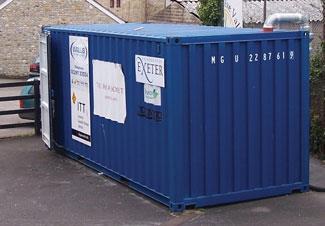 The container in situ, just behind the staff car park

The first step was convincing the school of the potential. Although the head teacher and other key colleagues were supportive, others in the staff room proved harder to convince, mainly due to concerns about safety - storing 100 litres of vegetable oil, up to 800 litres of methanol and 100kg of potassium hydroxide alongside 1000 school children is not your average risk assessment. 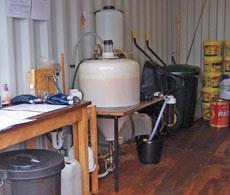 It was also important to find a secure and safe facility for carrying out the conversion and the solution came in the shape of a secondhand shipping container, which now lives in a corner of the playground.

To convert the shipping container into a safe working environment, spark proof lighting and extractor fans were installed, all electrical appliances were sealed against fumes, the container was vented and a strict working protocol was established. A key feature of the project was that it would be student run - year 10s and 12s would procure the raw materials, carry out the reaction, purify the product, carry out quality control and finally sell the biodiesel - so it was imperative that all these procedures and safety measures were pupil proof.

What also made this project different to other school-university collaborations was the involvement of local businesses including Axminster Power Tools and Axminster Carpets. It is amazing what businesses will offer if you just ask. Another locally-based firm (Lowara UK) helped to design and install the pumping system to get the oil and biodiesel to and from the reaction vessel. Lowara UK used the project as a learning opportunity for one of their engineers who quickly discovered that those in academia and teaching don't think in quite the same way as those in business and it was a fascinating lesson in practical problem solving for all concerned.

After visits from the Devon Health and Safety advisor, Devon County Council and having undergone an exhaustive risk assessment, the project was ready to go. A launch event in March 2009 started the project proper. In May that same year, pupils brought samples of their first two test batches to the University of Exeter in order to test the quality of the product and ensure that it was suitable for use in standard diesel engines. 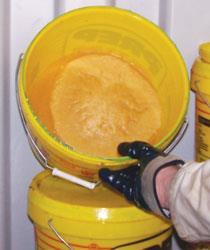 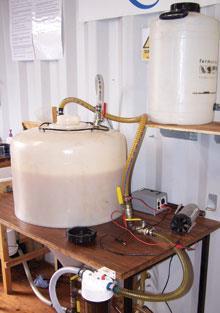 To produce high-quality biodiesel, the pupils had to remove contaminants, unreacted starting materials and side products, which could damage engines or affect performance. This was achieved by letting the phases separate and then drawing the waste-based phase off from the base of the reactor. The biodiesel was then sprayed with water to remove any soaps, methanol and other contaminants and the water was allowed to settle before the process was repeated twice. The fuel was then heated to 60°C and circulated overnight to dry it; in winter months, a proprietary additive was added to depress the freezing point below the usual -6°C. 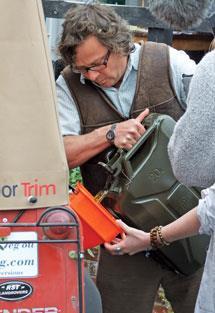 Pupils monitored the quality of the product by comparing viscosity, surface tension and cloud point to conventional petroleum diesel to ensure that the fuel would not stick in the engine or solidify in cold weather. They also measured the flash point to ensure that the fuel would ignite as required in the engine and to confirm removal of methanol, which would lower the flash point and compromise safety. The pupils also used GC-MS to check for the presence of glycerol, free fatty acids and other side products and found that the profile of the fuel compared very favourably to other commercially available alternatives. 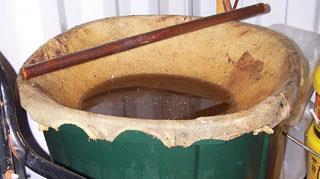 The project attracted the attention of local media and was soon to feature on national television - the first batch of biodiesel was sold to Hugh Fearnley-Whittingstall after being produced from waste oil from the River Cottage kitchen.

So far in excess of 2000 litres of biodiesel have been produced and sold at 75p per litre, representing a considerable saving for customers. Discounting the initial set-up costs, which were covered by the Royal Society Partnership Grants, and gifts from other local enterprises, about £1200 profit has been made.

But aside from all the publicity and newly established links between the school, university and local businesses, this is fundamentally about the students and how the project has contributed to their education, understanding and appreciation of science. Approximately 20 pupils - now in years 12 and 13 - have been involved in running the project. They have produced the biodiesel and liaised with both businesses - to collect waste oil donations - and customers purchasing the fuel.

Some students also did their work experience placements with the project. They established a safe and effective working protocol and coordinated the initial phase of biodiesel production.

Hannah Oliphant, a year 13 pupil, linked her A-level advanced investigation to the project by examining the manufacture of soaps from the waste glycerol. She got involved with the project as it was 'something a bit different' and the project helped her make the decision to continue with practical science at university. The biodiesel project has not only helped enhance the science curriculum across the school but it has also exposed the students to what it is like to study science at university and be a scientist in business.

The project has also provided a unique opportunity to link chemistry with other areas of the curriculum, such as business, maths, design technology and English. The students produced real business plans, audited the accounts, balanced the books, designed a logo and website and produced press releases. If you attended the Royal Society Summer Science Exhibition3 last year, you may well have bumped into the pupils and seen first-hand what a difference this project has made to them. Events were also held at Axe Valley Biodiesel during National Science and Engineering Week 2010, both for local primary schools and for members of the public, involving the whole community in the project.

Darren Holland, deputy head for business and enterprise at Axe Valley Community College neatly summarises why this has been such an excellent collaborative project by explaining that it helped the students recognise that science can have an economic value rather than just being theoretical. 'They are using their science knowledge and have applied it to create a viable business', he adds.

Heading into the future

So what next for Axe Valley Biodiesel? The project is still producing biodiesel and the school has been approached by a number of other schools and individuals interested in setting up their own biodiesel production system and looking for advice. The profits from the venture are put back into a new pupil-run business and the students continue to be enthused by science and the opportunities it provides. At first everyone thought the idea was crazy but it just goes to show what you can do with a little imagination and ambition. School-business-university collaborations really can work and not only enhance the teaching of science within the curriculum but demonstrate real world applications, enthuse the students in the applications of STEM subjects and make money.

Thanks must go the Royal Society Partnership Grants scheme for funding and to RCUK for funding events during National Science and Engineering Week 2010 and to all the businesses for their involvement in the project.

Nicola King works at the school of biosciences, college of life and environmental sciences, University of Exeter.