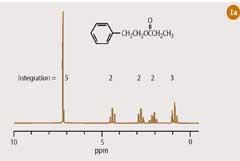 At first sight, it might appear that a 1 H-nmr spectrum of an organic compound (Fig 1(a)) and a magnetic resonance image of the human body do not share much in common. However, the techniques of high-resolution NMR spectroscopy and magnetic resonance imaging (MRI) are closely related. Both techniques require that the sample is typically placed in a strong magnetic field. In the former, the compound of interest is dissolved in a deuterated solvent and placed in a 5 mm sample tube, which is introduced vertically into the bore of a powerful magnet (Fig 1(b)). In magnetic resonance imaging, the 'sample' is a living human body (or a part of it), which is introduced horizontally into a wide-bore magnet in the MRI scanner (Fig 1(c)). Once inside the magnet, the 'sample' is subjected to radiofrequency radiation. Radiowaves and magnetic fields penetrate the biological tissues of the human body as readily as they permeate the inanimate samples used in high-resolution NMR spectroscopy. Since water (H2O) accounts for some 60-90 per cent of the soft tissues in our bodies, it is primarily the hydrogen nucleus in water that is excited by the radiofrequency and which therefore contributes most to the signal of an 'MRI scan'. Indeed, the medical version of nuclear magnetic resonance imaging was originally referred to as NMRI, though the 'nuclear' component of the acronym has been quietly dropped, presumably in deference to the concerns of the patient.

Figure 1b - Organic sample being put into an nmr spectrometer

The excitation which occurs in MRI, like high-resolution NMR spectroscopy, can be described by the fundamental equation:1

ie the frequency at which a spinning nucleus, such as hydrogen, absorbs radiofrequency radiation (ν) is directly proportional to the strength of the magnetic field (B0) which that nucleus is experiencing. Because the water molecule contains only one chemical environment for hydrogen, its 1H-nmr spectrum consists of a single peak.

To use this single resonance to produce an image of water from the human body, the pioneers of MRI - Peter Mansfield at the University of Nottingham and Paul Lauterbur at the State University of New York, Stony Brook in the early 1970s - superimposed a small spatially-varying magnetic field - a 'magnetic field gradient' - onto the static magnetic field (B0), provided by the magnet of the nmr instrument 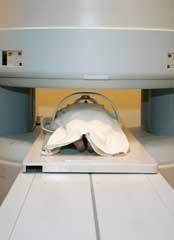 (Fig 1(c)). This caused various proton resonances from water within the body to appear over a range of frequencies. The precise frequency of each resonance is proportional to the strength of the magnetic field at that particular point in space, as determined by the magnetic field gradient. Thus, in MRI, the resonant frequency is an indicator of spatial position. Mansfield and Lauterbur, were jointly awarded the 2003 Nobel prize in medicine for their discovery.

From the outset, Mansfield and Lauterbur took advantage of the computerised pulsed-Fourier transform technique1  both to excite the water signal in the human body and to analyse the many spatially-dependent 1 H frequencies which resulted from water in the presence of a magnetic field gradient. Modern MRI scanners are equipped with three orthogonal gradients (x, y and z) and an MRI image is typically recorded from within a two dimensional 'slice' by operating two of these, while the third gradient is used to 'select' the slice across the body. (Full three dimensional images can then be reconstructed by splicing together many such 'slices'.)

While there are strong parallels in the ways in which a two dimensional nmr spectrum2  and a two dimensional nmr image are created using the pulsed-FT acquisition mode, the information revealed from each is different. Chemical shift and coupling, so important in high-resolution NMR spectroscopy,1, 2  do not feature in magnetic resonance imaging - after all, we are observing only a simple molecule (water). Rather the 'relaxation process' gives the most useful information in MRI. 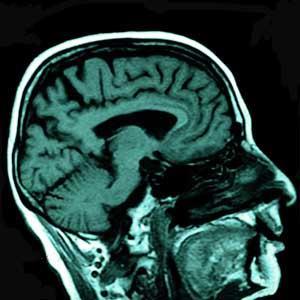 Relaxation describes the process by which a nuclear spin loses energy after it has been excited. There are two distinct mechanisms for relaxation of protons, referred to as T1 and T2, either of which can be used to add contrast to an image. In the brain, T1 -weighting is normally used to cause the nerve connections of white matter to appear bright and the congregations of neurons for grey matter to appear relatively darker. This contrast of white and grey matter can be reversed by using T2 -weighted imaging techniques. Thus, the superb detail contained in the MRI image of the brain shown in Fig 2 is largely the result of the difference in relaxation properties between white and grey matter. T1 - and T2 - weighting has also proved to be useful for distinguishing damaged or cancerous tissue from normal tissue on the basis of associated changes in the relaxation properties of water.

Competing medical imaging techniques, such as X-ray and ultrasound, cannot offer the clinician the same flexibility for varying image contrast as is provided by T1 - and T2 -weighting in MRI. The MRI scan is also harmless to the patient, since no ionising radiation is involved.

By the late 1970s and early 1980s, NMR spectroscopy and MRI had developed in different directions, in response to the demands of two different professional communities - chemists and clinicians. However, since most of the theory and instrumentation which underpins these two technologies are identical, an interchange of ideas occurred at the end of the 1980s, which led to the development of 'hybrid' techniques. Among these was magnetic resonance spectroscopy (MRS), which enables a spectrum of the various metabolites in the human body to be recorded directly from the living subject.

Magnetic resonance spectroscopy works by superimposing the information contained in an nmr spectrum onto an MRI image. This is achieved by using the magnetic field gradients of the MRI scanner to select a specific three dimensional location in the body; then switching off these gradients to record an nmr spectrum from within that location.

Perhaps not surprisingly, the first MRS studies focused on phosphorus rather than hydrogen because there is no competing signal from cellular water to mask the 31P-nmr signal. Clinical 31P-nmr spectra recorded from living organs, such as the human brain or heart, contained relatively few signals, produced by just a small number of metabolites, such as adenosine triphosphate (ATP), phosphocreatine and inorganic phosphate, all of which are involved in energy metabolism. By measuring the concentrations of these compounds in vivo it became possible, for the first time, to observe directly disturbances in the energy balance of the cell. In vivo 31P-NMR spectroscopy has now become very useful for diagnosing congenital metabolic abnormalities as well as for studying tumours. 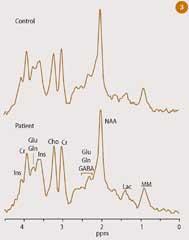 Clinical 1H-NMR spectroscopy appeared on the scene a little later because of the technical difficulties involved in suppressing the massive proton peak from water, which would otherwise swamp the 1H signals from the metabolites. A much larger number of metabolites are represented in a typical in vivo1 H-nmr spectrum, as shown in Fig 3. Peaks corresponding to the methyl group in lactic acid (lac) are highlighted in this 1H-nmr spectrum,1  which was recorded from a small volume of the living human brain. Lactic acid has proven to be a clinically useful indicator for brain tumours, cerebrovascular disease and abnormal glycolytic metabolism in general.

One of the most important recent developments in MRI has been the introduction of fast-imaging techniques, such as echo planar imaging (EPI), which can produce a 'snapshot' image within a fraction of a second. Using EPI, dynamic events can be captured in real time. It is even possible to string several sequential images together into a movie loop, running at up to 20 frames per second.

Fast-imaging techniques are also essential for another new imaging application, which has brought NMR to the attention of psychologists: functional magnetic resonance imaging (fMRI). The idea that thought processes or emotional responses might be detectable in the nmr signal from the human brain seems to have occurred independently to several of the early practitioners of the subject, but it is only recently that their aspirations have been realised in practice.

The fMRI technique records changes in the proton signal from water in the brain, which result from mental activity. These changes are short-lived and arise by a complicated chain of events. The first of these is the localised firing of a group of nerves. Thought requires energy, and therefore results in an increased demand for oxygen, which, leads to transient local changes in the concentrations of oxygenated haemoglobin and deoxygenated haemoglobin in the blood vessels which permeate that part of the brain. The magnetic properties of the two forms of haemoglobin are different - the former is diamagnetic, while the latter is paramagnetic. The resulting local changes in the relaxation properties of water provoke a change in the intensity of the nmr signal, which may last only a few seconds before the blood oxygen levels return to normal.

For a typical fMRI scan, the subject could be asked to perform a variety of mental tasks, such as listening to sounds, smelling odours or reading a book, while the entire volume of the head is imaged once every few seconds. Because of the relatively low intensity of the fMRI response, many such scans must then be analysed statistically before reconstruction into a three dimensional image. The resulting fMRI scan then depicts 'active' areas of the brain in colour, superimposed on a conventional gray-scale image.

Since its discovery 50 years ago nuclear magnetic resonance has been exploited by chemists and clinicians, providing some of the most powerful analytical tools of the 21st century. Research continues into new applications, such as quantum computing, which may again revolutionise the world we live in.

Dr Geoff Brown is lecturer in NMR spectroscopy in the department of chemistry at the University of Reading, PO Box 224, Whiteknights, Reading RG6 6AD.