Traditionally, medicinal chemists have focused on designing small molecules to inhibit key enzymes in disease pathways. By targeting the building blocks of biology with nanoscale chemical entities, they are now generating systems with new types of medicinal activity. The treatment of Aids and cancer, and emerging technologies, such as tissue engineering and gene therapy, are already benefiting from this approach.

Nanotechnology - one of the most exciting developments in modern science,1 - involves the synthesis, characterisation and manipulation of atoms and molecules with dimensions of the order of 1-100 nm ( Fig 1), and the exploitation of their resulting new properties. It is an interdisciplinary field, calling on the expertise of chemists, physicists and biologists. From the point of view of chemistry, nanoscale objects are quite large. Chemists are used to manipulating covalent bonds, which are  ca 0.15 nm in length. To make a molecule just 1 nm in size, chemists combine several bonds in a controlled way. One of the key challenges facing chemists, therefore, is to develop simple, efficient ways of synthesising and assembling well-defined structures with nanoscale dimensions. 2 Advances in physics, such as electron microscopy, have enabled researchers to visualise and study nanoscale systems, while biology is itself a nanoscale science. Many of the key building blocks in Nature, such as proteins, DNA and membranes all have nanoscale dimensions and are thus potentially ideal for use in nanotechnology. Not surprisingly, therefore, nanomedicine is becoming one of the most promising and rapidly developing areas of nanotechnology.3,4 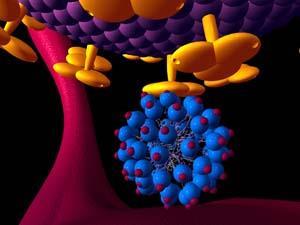 HIV/Aids is a major world health problem, particularly in developing countries, where life expectancy is currently falling. Currently, triple therapy offers an effective, if expensive, way of treating HIV - three drugs are given, each of which attacks HIV in a different way and keeps blood levels of the virus low. A better approach would be to prevent infection in the first place. While condom use can achieve this goal, it is sometimes difficult for people to ensure their partners use this kind of protection. Against this background, a new nanoscale anti-HIV agent is being developed by Starpharma, an Australian company, using a strategy based on 'dendrimers'. Starpharma's product aims to prevent transmission of HIV, rather than treat people who are already infected. 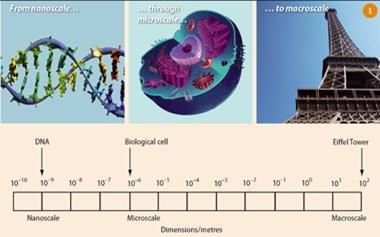 Dimensions of the nanoworld in perspective

Dendrimers are spherical, branched polymers, which are built layer-by-layer from core to periphery by repetitive covalent bond-forming reactions.5  By choosing the final reagent, it is possible to design dendritic molecules with different active surface groups. Starpharma has designed a nanoscale dendrimer (Fig 2), which has multiple copies of an antiviral drug on its surface. On its own, a single copy of the antiviral agent is not sufficient to prevent HIV infection, but the presence of multiple active drugs on the surface of the dendrimer, strongly enhances its binding to biological targets. 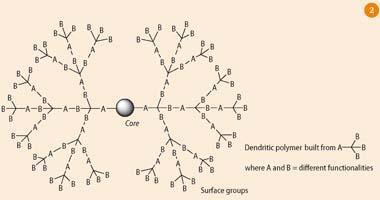 Figure 2 - Schematic of a dendrimer

This binding effect is referred to as multivalency,6  and occurs because once one drug on the dendrimer has bound to its target receptor on the surface of the virus, the other dendritic drugs are close by, and it is easier for them to bind to other nearby receptors on the viral surface. The concept of multivalency, widely exploited in nanomedicine, is similar to the chelate effect in metal-ligand binding. Already, this multivalent anti-HIV dendrimer has been formulated into a lubricating gel, which can be discreetly applied in the vagina before sex. In this way, the gel, which is currently being tested in human clinical trials, acts as a barrier to HIV infection, thus preventing uptake of the virus.7

Tissue engineering is a fascinating prospect. Advances in stem cell technology offer the possibility of growing organs and tissue to order - it may, in the future, be possible to grow or regenerate tissue in situ within a living organism. One possibility would be to regenerate nerve cells within the spinal cord of a patient suffering from paralysis, and thus reconnect damaged and disconnected parts of the nervous system. To do this, we would need some kind of nanoscaffolding to provide a support for the growing cells and to help organise their growth. Ideally, this scaffolding would slowly degrade over time, so that once the nerve cells have grown, the scaffolding disappears. The chemistry for doing this is not too far away.

By careful choice of molecular building blocks, chemists have designed systems which assemble into soft materials or gels.8  (Gels are characterised by a liquid-like phase and a solid-like phase. The solid network prevents the free flow of the liquid and thus the material resembles a gel. For example, gels are formed when the molecular building blocks, such as peptides, assemble through intermolecular, non-covalent interactions, such as hydrogen bonding or hydrophobic contacts. The resulting fibres tangle and ultimately form a self-supporting nanoscale network, which prevents the flow of bulk solvent. In such nanostructured soft materials, just 1 per cent of self-assembling molecules form the gel network, leaving a large free volume for the growth of cells.

In a recent study, Shuguang Zhang and co-workers at Massachusetts Institute of Technology (MIT) in Boston, used a synthetic peptide gelator to encourage nerve growth in an animal model system.9  (The gelator is the unit that assembles into fibres that generate the gel. The fibres which assemble through gelator-gelator interactions then tangle, forming a network that supports the gel.) The researchers injected a warm solution of the gelator into the damaged optic nerve of a hamster. As the solution cooled within the optic nerve, it formed a gel. The nanoscaffolding provided by this gel encouraged the regrowth of nerve cells, and indeed, the hamsters treated in this way regained over 80 per cent of their vision. Peptide gelators of this type are biocompatible, and will, over time, be broken down in the body. This result demonstrates that nanostructured synthetic materials can play a key role in regenerative medicine.

Another crucial nanoscale biological target is DNA. DNA plays a key role in many diseases - for example, cystic fibrosis and muscular dystrophy are genetic disorders where single defects in the patient's genome give rise to mutated non-functional proteins, which cause the disease symptoms. Even common diseases, such as cancer, can have a significant genetic component. However, in spite of the underlying role of DNA in many diseases, this molecule has not traditionally been seen as a useful target by the pharmaceutical industry. In contrast, however, the biotechnology sector has recently considered gene therapy to offer the prospect of using genetic material (fragments of DNA) as effective drugs.10  If DNA, or RNA, could be efficiently delivered into a cell, and then made ('expressed') to form specific proteins, it would be possible to treat a wide range of diseases.

One of the latest approaches to gene therapy, which involves removing tissue from a patient, genetically modifying it  in vitro , and then re-implanting it into the patient - the  ex vivo  approach - is finding some success. However, it is difficult to deliver genetic material into cells  in vivo. Initial trials made use of modified viruses as 'vectors' for delivery - indeed viruses evolved in order to integrate the genetic material they carry into cells, since this is the basis of viral infection. However, clinical trials using viral vectors suffered from problems of unwanted patient immune response, and there were even some unexpected deaths - though the patients were, prior to treatment, severely ill. The hunt is therefore on to find non-viral (synthetic) vectors which can efficiently transport genetic material into cells without causing side effects.11  Such vectors will have to fulfil the following criteria:

Many chemists worldwide are currently trying to develop synthetic vectors which could be used  in vivo for the treatment of a wide range of diseases. To bind DNA, which is a nanoscale biomolecule, chemists look to use nanoscale synthetic systems, because they can then form multivalent interactions with the double helix.

In our laboratory in York, we have developed a multivalent dendritic DNA binder, which shows the strongest DNA binding reported to date (Fig 3).12  This system has multiple spermine ligands on its surface. Spermine is a naturally occurring DNA binder, present at high levels in cells, which binds to DNA via electrostatic interactions between protonated amines and anionic phosphate groups. The presence of multiple spermine groups endows our compound with high-affinity DNA binding and excellent protection of the DNA. 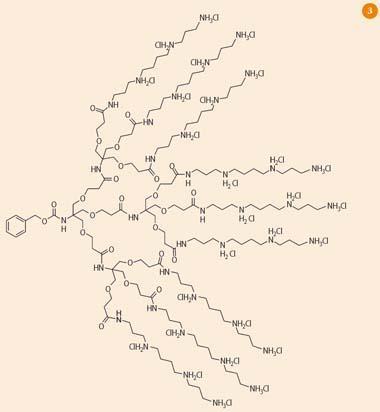 Figure 3 - Multivalent DNA binder with spermine groups on the surface

We have now begun to use this molecule to 'transfect' cells with genetic material. We can encourage this process by changing the chemical entity at the focal point of the branch - hydrophobic units, such as cholesterol, are particularly good, because they help disrupt membrane barriers faced by the dendrimer-DNA complex. Recently, we have developed related dendrimers which degrade in a controlled manner, on irradiation with light, so that once they have transported DNA into the cell they are able to release it in an efficient manner.13  We hope to go on to apply this type of delivery system in gene therapy.

The future of nanomedicine looks bright. This emerging field of medicine should play a key role in the development of more personalised treatments which have fewer side effects. Synthetic chemists have an essential role to play because they have the skills to design and manufacture nanostructures able to target a range of different diseases. In our search for enhanced medicinal therapies and technologies to improve the lives of those in the developed world, we should not achieve progress at the expense of patients in developing countries. Nanomaterials are not necessarily more expensive than traditional drugs, they are just designed to assemble in a smart way. We must ensure that the advantages of working with both traditional medicine and nanomedicine benefit as many patients as possible.

Professor David K. Smith is a lecturer in the department of chemistry at the University of York, Heslington, York YO10 5DD.

This article is based on a lecture given by the author at the British Association for the Advancement of Science meeting in York in 2007.