The roof of the recently rebuilt St Pancras train station in London contains 18 000 panes of self-cleaning glass. This remarkable material requires a titania photocatalyst, which is now being exploited in antibacterial coatings in hospitals, and in solar cells for the production of hydrogen.

A photocatalyst is a material that can capture and absorb light, and use this energy to produce reactive chemical species to increase the rate of a reaction. In the case of self-cleaning windows the reaction is the oxidation of organic molecules. The undesirable greasy, organic deposits on a surface of a window are thermodynamically unstable in the presence of oxygen, producing carbon dioxide and water: 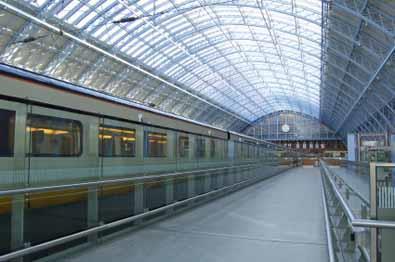 Under ordinary conditions reaction (i) is so slow that most organic chemicals can be considered stable even in the presence of oxygen. If the window surface is coated with a photocatalyst - typically titania, TiO2, at 30 nm thick, ie  around 1/50 000 the thickness of a human hair - and exposed to sunlight, the greasy coating will react with oxygen at room temperature. This is sometimes referred to as 'cold combustion', owing to the similarity to a combustion reaction, but without the necessary high temperatures.

From a chemist's viewpoint bacteria are simply collections of organic molecules. The cell linings are made up of mostly carbon and hydrogen, much like the greasy layer on the windows. The destruction of even part of the bacteria's cell walls would kill the bacteria.

We reasoned, therefore, that a photocatalyst coating could also act as an antibacterial agent. Superbugs like MRSA and E. coli are the cause of much concern in British hospitals and one of the major technological challenges for the 21st century -hospital-acquired infections cost the tax payer more than £1bn per annum,3 not to mention the suffering caused to those who catch such infections. Photocatalytic coatings would be particularly useful in hospitals on surfaces that would be susceptible to bacterial transfer - door handles, toilet flush handles, hand railings etc.

However, TiO2 requires ultraviolet (uv) light to be effective, and herein lies a problem - uv light is abundant on the outside of buildings but not inside buildings where antimicrobial surfaces are needed.

So we asked ourselves how could we adapt the titania coating so that it absorbs energy at a lower wavelength but still have enough energy to break up the bacteria. And to do this we needed to understand the chemistry and physics of photocatalysts.

The chemistry and physics of semiconductors

In a semiconductor, such as titanium dioxide, the excited state is close enough to the ground state as to be accessible in the event that a photon of light is absorbed by an electron. If an electron absorbs this photon or packet of light energy, not only is a higher energy electron produced, but also a 'hole' is created where the electron left. A positive hole is the 'space' left in the lower energy level after the excitation of one electron, and this space can be thought of as a chemical species in its own right, behaving much like a positively charged particle, and given the symbol h+ (Fig 1). 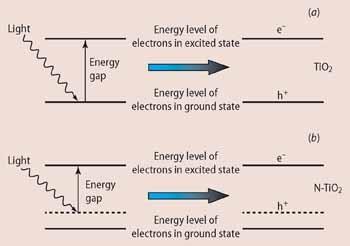 These electrons and holes can then either recombine or more usefully they can migrate to the surface of the titania particle where the electron can reduce and the positive hole oxidise organic material, such as grease or bacteria. Since energy can neither be created nor destroyed, it can only be changed from one form into another, we cannot get more energy out than we put in. The higher the gap in energy between the ground and excited states, the more energy that is available to do the work, but the higher the energy of the photon that is needed in the first place. TiO2 has an energy gap of about 3 eV which corresponds to light of wavelength <400 nm - ie in the uv part of the sun's spectrum. It is available in small amounts in sunlight (it is this fraction that causes tanning and sunburn) but virtually non-existent from room lighting.

So can we adapt TiO2 to absorb lower energy radiation, but still have enough energy to break up bacteria?

We have achieved this by doping the TiO2 structure with elements that can interact with the host, changing its electronic properties, raising the energy of the ground state and allowing an excited state to exist at lower energy than in the pure host material. Even a tiny shift in energy is likely to have a considerable effect because there are many more lower-energy photons available from sunlight.

We have made coatings by introducing a nitrogen feedstock into the chemical vapour deposition reactions that are generally used to make TiO2 coatings. These films are yellow in colour which is a good indicator that they are absorbing the blue end of the visible spectrum. Once made the films have to be tested and characterised to see what they are chemically and whether they are photocatalysts. 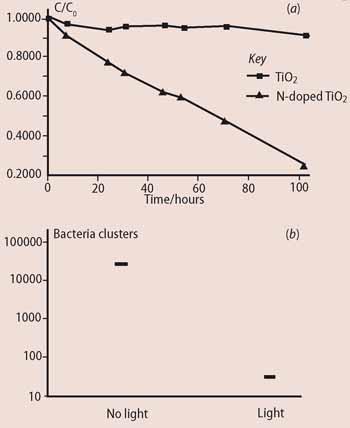 Photocatalytic films can be tested using many different methods. We use a waxy solid, such as stearic acid (CH3 (CH2)16 COOH), to model the behaviour of dirt. Stearic acid has long carbon chains and can easily be measured on the glass surface by IR spectroscopy. The C-H bonds show up clearly as two bands in the infrared region of 2800-3000 cm-1. The intensity of these bands indicates the number of molecules of stearic acid on the glass and how this changes with time on exposure to light (Fig 2 (a)). Proof of antimicrobial properties requires the careful application of real bacteria. We used E. coli because it is particularly resistant - a good kill with E. coli  usually suggests that the coating would kill less resistant bacteria such as MRSA (Fig 2 (b)).

Another major technological challenge for the 21st century is the need to find alternative energy sources to the depleting and damaging fossil fuels. Photocatalysts are being considered as materials to capture solar energy and convert it into hydrogen fuel.

Since photocatalysts drive a reaction using light, they could be used to catalyse the splitting of water into hydrogen and oxygen. This process of turning solar energy into chemical energy is similar to photosynthesis in plants, and sometimes called artificial photosynthesis:

Using a photocatalyst, energy can be captured from the solar spectrum and used to generate excited electrons paired with positive holes. Splitting water by this process allows solar energy to be utilised to generate a fuel (hydrogen), which can then be stored for later re-oxidation, and on demand energy release. Hydrogen can be oxidised to release the energy stored either by direct combustion in a power plant or in fuel cells to produce electricity which can be used to run vehicles.

The concept of using a photo-catalyst to produce H2 was first realised in the 1970s by Japanese researchers, A. Fujishima and K. Honda.4 They used a single crystal of TiO2 as their photocatalyst, connected through an electrical circuit to a platinum surface (Fig 3). Upon irradiation, electrons (e-) and holes (h+) were generated in the TiO2  single crystal. The holes allowed the production of oxygen gas at the surface of the titania single crystal (equation (ii)), while the electrons passed through the circuit to the platinum surface where the formation of H2 was catalysed (equation (iii)). Thus for most photocatalysts while the semiconductor can capture the photons to generate electron-hole pairs, and use the holes for oxygen generation, they cannot use the electrons to produce hydrogen without a second catalyst, such as platinum. The Fujishima-Honda system was the first in which a photocatalyst-hydrogen catalyst pairing was used to demonstrate water splitting. Unfortunately, it was not economically viable because the rate of hydrogen and oxygen production was too low.

The next step forward came in the 1980s, like many technical innovations of the period, with miniaturisation. Instead of large single crystals of titania attached to platinum sheets, small particles of TiO2 powder were decorated with microdots of platinum metal, which could then be suspended in solution and irradiated with light. This in effect reproduced the Fujishima-Honda system, but on a microscopic scale, with each of the thousands of particles acting as a miniature photocatalytic water splitting device.

This approach dramatically increased the surface area of catalyst in contact with water, but still did not lead to practical hydrogen production for two reasons. First the combination of the hydrogen and oxygen catalysts in such close proximity allowed significant back reaction of hydrogen and oxygen to form water, curtailing the production rate. Secondly, the product was an intimate mixture of the two gases, so an expensive gas separation step would have been necessary.

In the past decade there has been a resurgence of interest in the field with the development of a further refinement to photocatalytic water splitting - the photodiode. This device combines the benefits of a highly active surface with the separation of oxygen and hydrogen. It consists of a sheet of metal with a thin coating, less than 1 micron thick, of a photocatalyst on one side and of a hydrogen-producing catalyst such as Pt on the other. This sandwiched layer of materials then sits between two isolated water sources (Fig 4). As in previous systems, light absorbed by the photocatalyst generates electrons and holes. The holes are used to produce oxygen in the photocatalyst half of the device, while electrons migrate through the metal substrate to the platinum catalyst where water is reduced. So as in the Fujishima-Honda cell, the production of hydrogen and oxygen is separated. 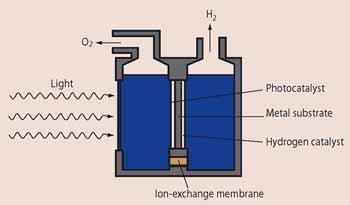 Figure 4 - Schematic diagram of a photodiode

The formation of nanocrystalline thin films of both the photocatalyst and the hydrogen-producing catalyst gives highly active, high surface area contacts with the solution, allowing a greater rate of hydrogen production than in previous systems. The device also separates the production of hydrogen and oxygen, thereby eliminating the risk of back reaction.

Working examples of the device have been made using the TiO2/Pt catalyst pairing and demonstrated to be able to produce hydrogen.5, 6 The challenge for researchers now lies in scaling up and developing the photodiode for economic production of hydrogen with solar radiation, at a cost that can compete with other energy sources. This may involve the refinement of the TiO2/Pt system, or involve research into new materials. Already doped titanias, tantalates and compounds, such as In2 O3, are being considered for increased photocatalytic efficiency.

Titanium dioxide may play a key role in helping to reduce mankind's reliance on fossil fuels, while at the same time helping to create a more sterile environment inside a hospital. It is almost certain that new applications for this material will emerge in the future.