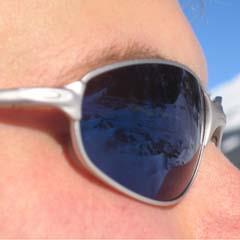 The practical highlights the importance of chemical kinetics (specifically first-order kinetics) and spectrophotometry within an industrial context and how an understanding of these topics aids interpretation of technical product data. We use this practical in the first-year chemistry course at Keele University, but it could be adapted to suit students at other levels.

Undergraduate experiments based on the kinetics and spectroscopy of photochromism are not new.1 However, I reasoned that such practical work would be enhanced if students were to work with actual commercial dyes. With this in mind I contacted James Robinson, an international company that manufactures speciality chemicals, who supplied samples of photochromic dyes in addition to providing me with valuable feedback on the proposed practical.

Sunglasses that darken in the sunlight and revert to near colourless in subdued light constitute the most widely known application of 'photochromism'. However, there are a diverse range of applications and potential applications that exist beyond the ophthalmic lens market including:2-5 fuel markers; security inks and packaging; cosmetics and fashion; and electronic nanotechnology.

Put simply photochromism is a light-induced reversible colour change and in its most familiar form involves an ultraviolet-induced transformation from colourless to coloured. Although the first photochromic sunglasses used silver halide technology,4  today organic photochromic dyes, particularly spiro-naphthoxazines (1) and naphthopyrans (2), are the main focus of R&D in this area. James Robinson,2-4 based in Huddersfield, has been actively involved in the development of such molecules since 1990 and currently markets a range of photochromic dyes under the Reversacol trade name.

This practical uses several Reversacol dyes in toluene solution. The dyes become coloured when exposed to uv light and the colour fades when the uv light source is removed. Spiro-naphthoxazines and naphthopyrans can be visualised as being composed of two planar components held at right angles (Fig 1). The photochromic effect arises from an electrocyclic ring opening that enables the two components to occupy the same plane, resulting in extended π-electron delocalisation (increased conjugation) and a consequent shift of the spectral absorption into the visible region. The reverse reaction is usually thermally driven, but in some cases can be driven by visible light, and proceeds at a rate that is dependent on numerous factors, including molecular structure, temperature and the molecular environment. Structural modifications such as variation of peripheral substituents enable chemists at James Robinson to fine-tune the spectroscopic (ie colour) and kinetic properties of the dyes according to the requirements of the application. In solution the reverse reaction usually follows first-order kinetics, but the kinetic behaviour in other environments such as in polymers and plastics can be more complex.

Desirable properties of photochromic dyes for use in ophthalmic lenses include rapid colouration upon exposure to uv light combined with an acceptable fade rate. In addition, the temperature dependence of the fade rate, which can affect the depth of colour achieved under constant illumination, should ideally be minimal.

The practical has several parts:

Equipment: uv-visible spectrophotometer; flashlamp or UVA lamp; quartz cuvettes; thermometer.
Materials: solutions of various photochromic dyes (40 mg l-1 (~10-4  mol dm-3)) dissolved in HPLC grade toluene (methyl benzene). The dyes used at Keele are selected from Reversacol Sea green, Rush yellow, Berry red, Palatinate purple and Plum red. They cost ca £ 10 per gram (for small quantities), depending on the dye.
Safety: students need to be made aware of the hazards associated with exposure of the skin and eyes to uv radiation. Specific safety precautions depend on the design details of the uv source being used. At Keele we use either a Portaflash 336VM studio lighting system in flash mode or a uv search lamp from CSI Equipment. However, natural daylight through a window should be sufficient to induce colour change in the dye solutions. The dyes are most effectively 'coloured-up' by UVA light around 360 nm. Reasonable safety precautions should be exercised in handling the dyes and dye solutions, including the use of gloves. 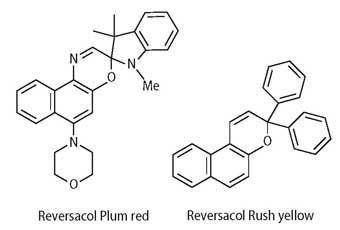 We first ask students to find a definition of 'photochromism' and some examples of its applications (or potential applications). The James Robinson website provides general information on photochromism as well several informative articles available as pdf files from the 'news' section on the website.

Students obtain uv-visible absorption spectra of the four photochromic dyes in toluene in their unactivated (colourless) and, where possible, activated (coloured) states. For the colourless forms of the dyes this is straightforward. However, using a scanning spectrophotometer to record the spectrum of the coloured form of the dye is more challenging, particularly for dyes with short half-lives because the dye fades significantly as the spectrum is being acquired. This can cause an apparent shift in the position of the absorption maximum (λmax) when compared with James Robinson data, but the shift is usually small (a few nanometres). It is also important to achieve uniform colouration of the solution throughout the cuvette, which is best achieved by shaking during or immediately after illumination. The solutions can be 'coloured-up' by using a hand-held UVA lamp or flash lamp. Students compare their λmax values with those published by James Robinson on its website (see Table 1). Representative spectra are shown in Fig 2.

In general, students should work with the dye solutions in sealed quartz cuvettes. This makes it easier to expose the solution to the uv source then shake the sample to ensure uniform colouration and finally place the sample in the spectrophotometer. The depth of colour observed depends on the dye, the characteristics of the uv illumination and temperature. As the fading of the colour for photochromic dyes generally follows first-order kinetics, the extent of colouration of the solutions is not critical (ie the uv light intensity does not affect the fundamental measurements done in the practical). 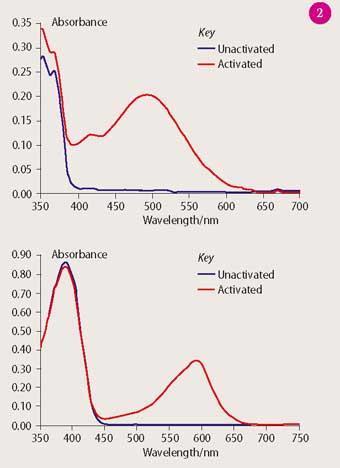 Students then obtain room temperature fade rate constants for the four photochromic dyes in toluene. (They must remember to record the temperature.) Having located the λmax of the coloured forms of each of the dyes, students set the spectrophotometer to this wavelength and record the fall in absorbance with time. They have to exercise judgement over the data collection interval and total data collection time. As before, it is important to achieve uniform colouration throughout the entire volume of solution within the cuvette. At Keele we do not have sufficient temperature control apparatus for the number of students in the class and therefore the kinetic measurements are done at ambient temperature, which is recorded.

For the majority of dyes the fade kinetics are first-order in toluene solution and the analysis (equations (i) and (ii)) of the absorbance versus time curves involves plotting ln(A -A∞) versus t, where A∞ is the final absorbance at thermal equilibrium. The slope of the resulting linear plot is -k and the half-life is obtained by using equation (iii).

Representative data are shown in Fig 3. Students then compare their half-lives with the values published by James Robinson (Table 1), noting that the James Robinson values pertain to 20°C. 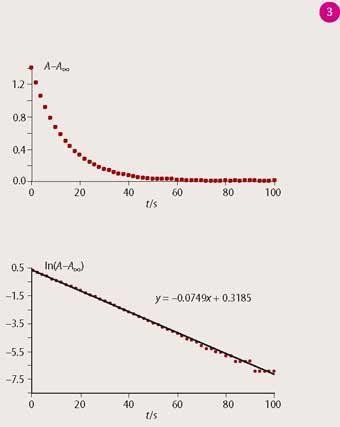 Influence of temperature and solvent

If suitable temperature control equipment is available then the temperature dependence of the fade rate constants can also be investigated and the activation energy obtained from an Arrhenius plot of lnk versus 1/T.

The properties of the dyes are solvent dependent and this is another aspect of photochromism that can be explored. Not only do the fade rates vary with solvent, but the observed colours are also affected to a greater or lesser extent.

We find that the use of real-world contexts enhances the scope of practical work in terms of what students learn and do. They get the opportunity to apply the core chemistry they are learning within tangible industrial/commercial contexts, which they find motivating. They also learn about some of the key issues that go into the design and marketing of such products.

Dr D. J. McGarvey is a senior lecturer in the school of physical and geographical sciences at Keele University, Keele, Staffordshire ST5 5BG.

I thank The Higher Education Academy Physical Sciences Subject Centre for funding of a Development Project (2004) and Helen Parry, business development manager for James Robinson, Huddersfield, for supplying the Reversacol photochromic dyes and for helpful comments and feedback in the development of the practical.