The average UK family spends around £450 a year on plastic packaging for myriad consumer products, including foods and drinks. But with dwindling oil supplies and landfill sites reaching their capacity, is it time to look to Nature's polymers, such as starch and cellulose, as alternative, renewable materials to satisfy our packaging needs? 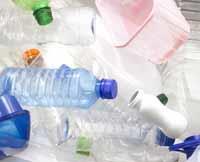 The worldwide production of plastic is around 100 million tonnes per year. If we take into consideration the amount of energy required to process this material, this equates to around 200 million tonnes of oil, or ca 4 per cent of the world's annual oil production. This is significant if we consider that oil is a dwindling resource.

The UK uses ca 4.7 million tonnes of plastic and throws away 3 million tonnes, over half of which is from packaging. Moreover, while petroleum-based polymers commonly used today in packaging, eg polyalkenes, have some advantages over ceramic and metallic containers - they decrease food wastage and transportation costs, for example - they do not degrade rapidly in the environment. Typically, plastic bags last for anything from 20 to 1000 years. Putting such waste into increasingly scarce landfill sites is not a long-term solution.

More sensible would be to use less, and reuse and recycle more, but this goes against a consumer society and fads like drinking bottled water which consumes around 1.5 million tonnes of plastic each year alone. Much of this ends up in rivers and canals, and kills thousands of aquatic wildlife. So chemists are looking to Nature for renewable sources of plastics for packaging - ie natural polymers such as cellulose and starch. Plants produce about 50 million tonnes of these carbohydrates every day, which could potentially satisfy our current addiction to plastics in just two days a year.1

Plants capture CO2 from the atmosphere to make glucose:

These glucose units then join together in the plants to form either starch or cellulose. The resulting polymer has different properties depending on the stereochemistry around the linking groups and the degree of chain branching. Moreover, these natural carbohydrates are contained in complex aqueous solutions within plant cells, which affect the crystallinity of the polymer and form complex structures. There will be regions where chains are either hydrogen bonded with neighbouring carbohydrate polymers or to components, such as salts, lipids, amino acids etc, in the electrolyte within or between cells. 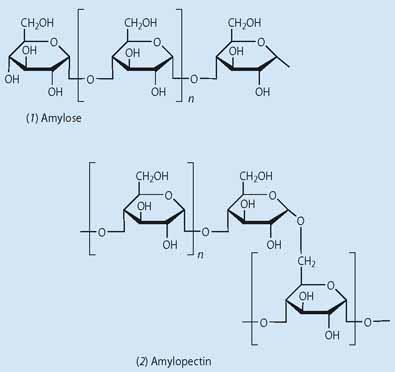 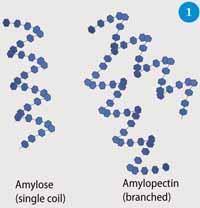 Figure 1 - Schematic of the structures of amylose and amylopectin

Starch is made up of two polymeric carbohydrates (polysaccharides) - amylose (1), a linear structure comprising 1000-20,000 linked d-glucose units, and amylopectin (2), a branched structure comprising ca two million glucose units with a branch at about one in 20 of these (Fig 1). The relative amounts of these polymers in starch varies between different species, eg potatoes, corn, rice and wheat, but in most plants the amylose content is typically 20-30 per cent, and that of amylopectin 70-80 per cent. This high degree of versatility gives materials with different physical properties, including a significant variation in their ability to repel water. Starch is found in all parts of the plant and makes structures as diverse as dense tubers, soft fruits and flexible leaves. Cellulose (3) is a simpler, linear polysaccharide made of glucose monomers linked by 1,4-glycoside bonds, and gives mechanically more rigid and durable materials. Cellulose is more difficult to process than starch because of its poor solubility. 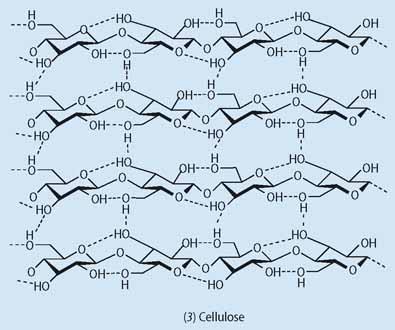 In principle the main limitation to using purified starch and cellulose in place of petroleum-based plastics is that they decompose at temperatures below that required (ca 180-200°C) to mould them into specific shapes. At such high temperatures it is also impossible to use water to form the initial slurries required in the processing. However, revolutions in packaging are happening as evidenced by the almost overnight transformation of sandwich packaging from polyethene to card-composites.

The physical properties of these carbohydrates are thus dominated by the extensive inter- and intramolecular hydrogen bonding between the -OH groups on the glucoside residues. To process the polymer and change its properties the hydrogen bonds need to be unzipped and a compound that has a greater interaction - than the hydrogen bonds - inserted.

In fact we do this when we make different breads. Compare, for example, a dense pumpernickel with a light brioche. The basic ingredients are the same. A source of starch, eg rye, wheat or corn flour; water or milk; salt; an oil or fat to act as a plasticiser (increases the plasticity or fluidity of the material to which it is added); sometimes a raising agent such as yeast or sodium hydrogen carbonate to change the density; and sometimes a lipid in the form of eggs to stabilise an emulsion and support a cellular structure. During the cooking process the water breaks up the intramolecular hydrogen bonding in the starch and makes a thermoplastic. The main limitation with baked products is that they go stale - ie they lose water and the starch recrystallises. Also bread is a perfect medium for growing mould, so it biodegrades very rapidly. 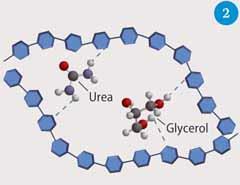 Chemists have learnt from Nature and past generations of bakers when designing and manufacturing new plastics. Plasticised starch (Fig 2) is already used in packaging as small spongy chips that act as shock absorbers. Glycerol is added as a plasticiser, which is cheap, biodegradable and does not evaporate from the plastic so it does not dry out. These packaging materials dissolve in water, making them easy to dispose of. A variety of polyols (alcohols containing multiple hydroxyl groups), sugars and urea2,3 have also been used as plasticisers. All of these additives are non-volatile, non-toxic and form strong hydrogen bonds. While plasticised starch and starch-based composites are widely used, the effectiveness of the resulting polymers is compromised by the complex interactions between the constituents, which result in brittle or powdery materials. 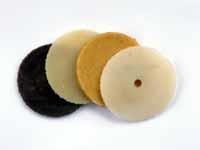 Waste not want not - plastics made from (left to right) banana skin, maize flour, orange peel and potato starch

In our research we have tried to emulate Nature in forming starch blends by adding more complex mixtures of electrolytes, surfactants, blowing agents (any substances that can produce a cellular structure in a plastic - eg compressed gases) and polar organic molecules to disrupt the inter- and intra-chain hydrogen bonding and then crosslink the structure to give the final material. We have also tried to find simple ionic and molecular alternatives for the natural liquid found inside plant cells by replacing the aqueous components with non-aqueous alternatives. By varying the composition and constituents, we can change the elastic modulus of the finished product from a stretchy rubber to a rigid plastic.

Figure 3 - SEMs of starch before (left) and after (right) modification

For packaging we also need to reduce the density of the polymer but retain its resilience. This can be done by blowing the polymer either with a volatile liquid or with a compressed gas. This technology is well developed for many polymeric systems but not with starch. Ethanol can be used to produce low density expanded starch, which can be used for chromatography and catalyst supports.5 Extending this technology to these advanced composites could lead to effective alternatives such as expanded polyurethanes and polystyrene.

More recent research has shown that chloride- and ethanoate-based salts can be added to dissolve cellulose. Imidazolium salts have also been used because they are not only strong Lewis bases (a substance that can donate an electron pair) but also liquid at relatively low temperatures. When water is added to the solution of this salt and cellulose, the carbohydrate can be cast into a fibre or a film.6 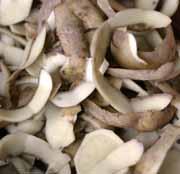 Is it time that we looked towards a natural resource, such as potato peel, to feed our addiction to plastics?

The potential controversy with this technology, however, comes down to whether it is more beneficial to use crops for plastics or for food? One solution would be to use crops for both. Agriculture and the food processing industry produce vast amounts of waste starch - such as banana skins and orange peel - which could be used to make plastics.

Ultimately our modern lives can only be made sustainable by decreasing our dependency on oil-based chemicals and in particular polymers for packaging. Starch is certainly one alternative source of renewable and sustainable polymers but others such as cellulose and chitin will also play an important role in the polymers of the future.

Professor Andrew P. Abbott is head of department and Dr Andrew Ballantyne is a postdoctoral researcher in the department of chemistry at the University of Leicester, Leicester LE1 7RH.