This year marks two significant centenaries in radiochemistry. In 1908 the discoverer of radioactivity, Henri Becquerel, died, and in the same year Ernest Rutherford was awarded the Nobel prize in chemistry for his work on radioactivity.

Antoine-Henri Becquerel was born in Paris on 15 December 1852, the son of the French physicist Alexandre Edmond Becquerel who was known for his work on luminescence and phosphorescence. The young Becquerel studied science at the École Polytechnique in Paris where he too became interested in aspects of light absorption, eventually occupying the chair of physics, like his father and grandfather before him, at the École in 1895.

In 1896, inspired by Wilhelm Konrad Röntgen's discovery of x-rays, Becquerel investigated the possibility that such x-rays could cause phosphorescence and whether phosphorescent materials could emit x-rays. He wrapped silver bromide plates in black paper, placed crystals of potassium uranyl sulfate (K2 [UO2 (SO4)2].2H2 O) on top and exposed them to sunlight. After developing the plates he observed faint silhouettes of the crystals on them.

The next day he similarly prepared more plates and this time added a piece of copper foil, but the sun refused to shine so he kept the plates in the dark and developed them later. Again the images appeared, with an additional copper silhouette - he had discovered radioactivity.

Pure uranium metal gave similar images, confirming that some type of radiation, and not light-induced phosphorescence, caused the effect.1 He also showed that such radiation could make the surrounding air conducting.

On 2 March 1896 Becquerel announced the results of these experiments to the Académie Française. This work later inspired Marie Curie (née Manya Sklodowska) to study radioactivity, which led her to the discovery of polonium (June 1898) and, with her husband Pierre, to the discovery of radium (December 1898).

Becquerel's discovery of radioactivity earned him the Nobel prize for physics in 1903 'in recognition of the extraordinary services he has rendered by his discovery of spontaneous radioactivity' together with Pierre and Marie Curie for their work. Appropriately, his name lives on as the becquerel, (Bq), the SI unit for radioactivity: one becquerel corresponds to one nuclear disintegration per second. He died at the age of 56 in Le Croisic, Brittany, on 24 August 1908.

Ernest Rutherford was born on 30 August 1871 in Brightwater, near Nelson on the South Island of New Zealand, one of 12 children. He won a scholarship to Canterbury College Christchurch in 1889 to study physics and mathematics, working initially on the magnetic properties of iron exposed to high-frequency radiation.

Six years later, at the age of 24, he won another scholarship, this time to Cambridge University to work with the physicist J. J. Thomson (who discovered the electron in 1897). As Thomson's first research student, Rutherford continued his work on magnetism but, after Becquerel's discovery, soon became interested in radioactivity.

In 1897-8 Rutherford studied the radioactivity of uranium and thorium using an apparatus comprising zinc plates (A and B) 4 cm apart and charged to 50 V (see Fig 1). He placed aluminium foils of differing thicknesses above the uranium sample on A and measured the 'rate of leak' (current flowing through the ionised air) using a Thomson quadrant electrometer. 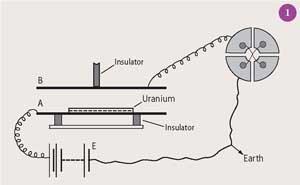 Rutherford showed that two types of radiation, or 'emanation' as he called it, were involved: one that was easily absorbed and strongly ionisied the surrounding air, and another more penetrating but only weakly ionising.2 He named the former simply α-rays and the latter β-rays after the first two letters of the Greek alphabet, characteristic of a man who liked 'simple experiments and simple results'.

The nuclear equations likely to have been involved were:

The β-radiation arising from the 'daughter' element:

In September 1898 Rutherford was appointed professor of physics at McGill University, Montreal where he continued his investigations into the radioactivity of uranium and thorium compounds. His experiments at Cambridge had shown that the radioactivity of thorium compounds, unlike those of uranium, was variable, depending on where the apparatus was placed in the room.

The movement of air caused by the opening or closing of a door at the end of the room opposite to where the apparatus is placed, is often sufficient to considerably diminish the rate of discharge.3

So he devised another apparatus (Fig 2) in which air (or tobacco smoke) could be passed over thorium oxide (A) in a metal tube (B) attached to an insulated cylinder (C) containing an electrode (D) with a 100 V potential between C and D. The electrometer showed a signal when the air passed, and the radioactive decay could be measured as a function of time.3 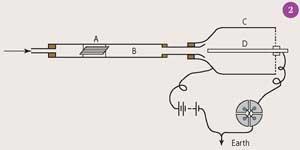 In collaboration with Frederick Soddy he went on to characterise this 'emanation',4 soon realising that the variable decay of the thorium compounds was the result of the formation and decay of a new element. From its chemical inertness, Rutherford and Soddy reasoned that the element was probably a member of the noble gases recently discovered by William Ramsay and John Rayleigh in 1894-98. Rutherford's 'emanation' was probably radon (Rn), an α-decay product of Ra (which he called 'thorium-X') and he should be credited with the discovery of the element radon.5 That atoms of some elements could disintegrate into a new element was revolutionary at the time. Soddy recollected later saying:

Rutherford, this is transmutation: the thorium is disintegrating and transmuting itself into an argon gas...

to which Rutherford replied:

...don't call it transmutation... they'll have our heads off as alchemists.

Rutherford went on to confirm chemically that they had formed a new element - the strongly radioactive 'thorium-X' (probably Ra) could be precipitated as a hydroxide from thorium solutions. Its radioactivity decayed exponentially while that of the parent thorium was diminished by the same amount, recovering exponentially at the same rate.4

Rutherford and Soddy soon realised that other elements, previously considered immutable, could change: thorium, uranium, radium and others decayed into other elements. In 1902 they wrote what is essentially still our view of radioactivity:

...(an) atomic phenomenon accompanied by changes in which new types of matter are produced... within the atom... Radioactive elements (are) undergoing spontaneous transformation.6

In 1903 Rutherford classified radioactive emissions, including γ-radiation, which he had previously noted as a 'very penetrating' radiation from his thorium work,2  (the observation of such radiation is generally ascribed to Paul Villard in 1900) and measured the thicknesses of aluminium foil needed to block α-, β- and γ-rays (0.0005, 0.05 and 8 cm respectively). To study α-rays he passed hydrogen over radium to remove radon, placing above it vertical metal plates 0.05 cm apart with 600 V between each pair. Measurements of the deflections of the α-radiation caused by these and by magnetic fields showed that 'α-rays' were actually particles with a charge-to-mass (e/m) ratio not far from that of hydrogen.7 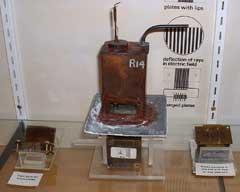 In 1908 Rutherford was awarded the Nobel prize in chemistry 'for his investigations into the disintegration of the elements, and the chemistry of radioactive substances'. During his acceptance speech he commented that he had dealt with rapid transformations, but the quickest was his own - from physicist to chemist in a single moment.

Rutherford's apparatus for studying 'emanations from thorium and radon'

On 24 May 1907 Rutherford returned to England as professor of physics at Manchester and continued his investigations of α-particles, working mainly with Hans Geiger. By using an apparatus similar to the earlier 'spinthariscope' of William Crookes which produced fluorescent flashes on a zinc sulfide screen when struck by α-particles, they studied the angles of scattering of α-particles by aluminium foil. They showed that atoms of the metal contained large electrical 'forces' (electrostatic charges) and concluded that the α-particle, after it has lost its positive charge, is a helium atom.8

Rutherford confirmed this result by sealing radon in a glass tube so thin (0.01 mm) that helium could percolate out but not air. Surrounding it was an evacuated tube; they passed an electric discharge through this, which after six days showed the atomic spectral lines of helium.9 These experiments gave Rutherford insight into the structure of the atom, perceived by many as the climax of his career.

Until 1909 the generally accepted model of the atom was J. J. Thomson's 'plum pudding' model of a uniform sphere of positive charge in which negatively charged electrons were embedded. In 1909 Geiger and Ernest Marsden showed that a small proportion of the α-particles directed onto gold foil were scattered at angles exceeding 90°. Rutherford reasoned that such large deviations could only arise from single collisions of α-particles with a very strong electric field within a single atom (this coulombic repulsion of charged α-particles by charged nuclei became known as Rutherford scattering).

By 1911 Rutherford concluded that there had to be a very small area of positive charge at the centre of the atom to balance that of the surrounding electrons. In 1912 he wrote: 'the atom consists of a positively charged nucleus... surrounded by... electrons in rapid motion'.10 In doing so, Rutherford acknowledged the model of the atom put forward by Hantaro Nagaoka who, in 1904, proposed a 'Saturnian' system of electrons circling a positive charge, but this had been ridiculed by others as unstable.10

On recognising that α-particles could be singly deflected by nuclei Rutherford wrote:

...'it was quite the most incredible event that ever happened in my life... it was about as incredible as if you fired a 15-inch shell at a piece of tissue paper and it came back and hit you.'

Rutherford's atomic model of the atom is still used today.

During World War I Rutherford worked on sonic methods for detecting submarines, but after the war returned to Cambridge, succeeding J. J. Thomson as Cavendish professor of physics, and continued his research into α-particles.11 In 1920 in his Royal Society Bakerian lecture12  he suggested that an isotope of hydrogen 1 H should exist (later identified by Harold Urey who was awarded the Nobel prize in chemistry in1934 for the discovery of deuterium). Rutherford also remarked that... it might be possible for an electron to combine closely with the hydrogen nucleus, forming a kind of nuclear doublet... its external field would be practically zero... - a clear prediction of the neutron,12 which was discovered later by James Chadwick in 1930.

At Cambridge Rutherford concentrated on the artificial transformation of elements, the phenomenon so gingerly proposed by him and Soddy in Manchester. He also continued his work on the bombardment of light atoms with α-particles and observed the consequent emission of long-range protons, commenting that 'if α-particles of still greater energy were available we might expect to break down many of the heavier elements'.11 The invention in 1929 of the cyclotron by another Cambridge collaborator, John Cockroft eventually made this possible.

Rutherford collaborated with James Chadwick to investigate the scattering of α-particles by a number of elements, using a radium α-source with a moveable zinc sulfide screen. They observed scintillations even when the source was moved far away from the screen and concluded that the nitrogen atoms were disintegrated by collisions with α-particles with consequent emission of long-range protons.13

Rutherford received many honours in addition to the 1908 Nobel prize for chemistry, including a knighthood (1914), the Order of Merit (1925) and a peerage (1931). He is commemorated by the man-made element 104 (rutherfordium), the phenomenon of Rutherford scattering, and the Rutherford Appleton laboratory at Didcot, Oxfordshire.

He was a great and much-loved character, often building his own apparatus from very simple materials - the archetypal 'string and sealing-wax' approach. He died in Cambridge on 19 October 1937, and his ashes were interred beneath the nave in Westminster Abbey, the first scientist from the Commonwealth to be thus honoured.