Supercritical fluids are a curious single phase that combines the properties of liquids and gases.1 Originally used as 'clean' solvents, chemists at the University of Nottingham are now exploiting these fluids in drug delivery systems and tissue engineering.

In 1822 the French physicist Baron Charles Cagniard de la Tour was looking for an answer to the question: 'What happens when you boil a liquid in a sealed environment?'. He placed liquid ethanol and a ball bearing inside a sealed gun barrel and heated. Above a certain temperature he could no longer hear the liquid sloshing inside the tube when the barrel was moved. He had discovered the 'critical point' of the substance - the temperature above which it was neither liquid nor gas, but a single phase, a 'supercritical fluid'.2 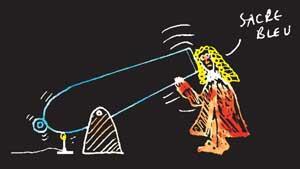 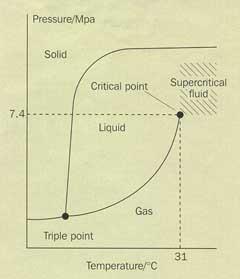 Figure 1 is a phase diagram of carbon dioxide, which illustrates the temperature and pressure conditions at which each state is thermodynamically stable. As we move along the gas-liquid curve, the temperature and pressure are both increasing, and the liquid is becoming less dense while the gas (vapour phase) is becoming more dense. Eventually, at a critical temperature, the densities of the two phases are identical and the boundary between them, the meniscus, can no longer been seen. Nowadays, the transition between a liquid and a supercritical fluid can be observed using high-pressure view cells (Fig 2).

Supercritical fluids are proving to be useful because they have properties similar to both a liquid and a gas. Like a liquid, they can act as a solvent and like a gas they can diffuse quickly and easily through substances. Carbon dioxide has easily attainable critical conditions of 31°C and 7.4 MPa,3 making it the most extensively used supercritical fluid. As a byproduct in many chemical processes, carbon dioxide is widely available and relatively cheap. Supercritical carbon dioxide (scCO2) has already been used as a solvent in the extraction of caffeine from tea and coffee, and for dry cleaning clothes. As a solvent, scCO2 leaves behind no toxic residues, is non-flammable and thus an environmentally acceptable replacement for toxic solvents that are currently being used in syntheses and processing. More recently, in our research group, we have been using scCO2 to modify polymers by impregnating them with scCO2 -soluble materials for use in drug delivery systems and tissue engineering applications, both of which can be difficult to achieve using conventional methods. 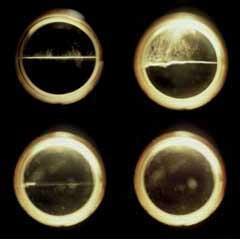 To impregnate polymers with, for example, silver nanoparticles we use a technique that exploits the solvation powers of scCO2 to dissolve a silver-containing organic complex, such as [Ag(hfac)(tetraglyme)]. Supercritical CO2 penetrates into polymers (and a wide range of other materials) and carries the metal complex uniformly into the substrate. Once inside the polymer, hydrogen is used to reduce the complex to silver nanoparticles. The ligands released from the metal are then carried away by the scCO2. By using different ligands, we can control the dispersion and concentration of the nanoparticles within the polymer since different ligands will change the solubility of the complex in scCO2.

The ability of silver to act as an antimicrobial agent has led to these impregnated polymers being used in implants and tubing to fight off infections. (The same impregnation techniques have also been used commercially on large scales to carry dyes into fibres, and preservatives into planks of wood.)6

Silver (and gold) nanoparticles have also proven to be useful for detecting analytes, such as impurities in a water stream, by using surface enhanced Raman spectroscopy. When laser light is shone onto the silver nanoparticles, the vibrational signal of molecules attached to the silver surfaces is amplified many times, making detection of the molecules much easier than would normally be possible. Together with physicists at Southampton University, we are trying to exploit this to develop new sensors.

Controlled-release drug delivery methods are commonly used in the pharmaceutical industry to vary the period of drug release within the body. This is beneficial for a wide range of conditions, primarily because it can reduce the number of injections required.

Controlled-release devices work by encapsulating drug molecules within biodegradable polymers, such as poly(lactic acid) (PLA) and poly(lactide-co-glycolic acid) (PLGA). These polymers are broken down by hydrolysis or by enzymes in the body into small, water soluble fragments. The dissolution of these fragments causes erosion to the surface of the particle, enabling the drug molecules to be released. The speed at which the drug is released can be tailored by varying the molecular weight and type of polymer used.

To make these controlled-release systems, we need to mix drug molecules with liquid polymers. Conventionally,7 the polymer was dissolved in a suitable organic solvent, and the drug dissolved in water. Water and oil phases do not mix, but by adding a surfactant (detergent) we obtain a water-oil emulsion. This emulsion is then added to a much larger volume of water, forming a water-oil-water emulsion. The solvent is allowed to evaporate, leaving polymer particles which now contain the drug molecules and which can be collected and dried. A disadvantage of this method is that many drugs are proteins and peptides which are denatured when exposed to solvents and emulsions and so cannot be encapsulated by this method without significant loss of activity.

A solution to this problem would be to use scCO2 as the solvent for the polymer.4,8,9 The gas-like properties of scCO2 make it an excellent plasticiser or lubricant, lowering the glass transition temperature, Tg, of the polymer, ie the point at which polymer chains have sufficient energy to move freely and become more liquid-like.10 Under these conditions, the drug molecules can now easily be mixed with the polymer. The resultant drug-polymer mixture is then sprayed through a nozzle. As the mixture leaves the nozzle, the CO2 evaporates, increasing the Tg and causing the polymer droplets containing the drugs to solidify. The size and shape of these particles can be tailored by altering the nozzle diameter, mixing chamber conditions and the collection environment.

A recent example of the use of this technique is the incorporation of human growth hormone into polymer particles. This is a potent but delicate protein-based drug, and one that is not easily encapsulated into polymers using conventional techniques.

With the increasing waiting lists for organ transplants, tissue engineering - ie the replacement or repair of diseased or damaged tissues, such as bone, cartilage, and organs - is becoming a major research area. The tissue (cells) can be grown externally and transplanted into the patient, or can be grown inside the patient.

Biodegradable polymer scaffolds are commonly used in tissue engineering to provide a three dimensional, geometrical support upon which cells can grow. Because the polymers are biodegradable, they gradually breakdown into soluble, non-toxic fragments, within the body, leaving the new tissue in its place. Poly(lactide), for example, breaks down into lactic acid, a natural metabolite of the body. Drugs, nutrients and growth hormones can all be incorporated into the polymeric scaffolds to facilitate the growth of cells and to minimise rejection by the body.

Conventional ways of producing these scaffolds include: solvent casting and particulate bonding; fibre extrusion and bonding; and three dimensional printing. All these methods are limited in that they require high temperatures and/or solvents which denature (damage) the sensitive drugs, nutrients and growth promoters. However, as in the case of drug delivery devices, scCO2 can be used to overcome these problems.4,11

The polymer, drugs, nutrients and growth promoters are added to a high-pressure vessel; scCO2 is added to liquefy the polymer; and the ingredients are mixed together and left for 30 minutes-two hours to enable the CO2 to diffuse completely within the polymer chains and to ensure thorough mixing. On removal of the CO2 two processes occur. First, owing to the drop in pressure, the CO2 becomes less soluble within the polymer and diffuses out, causing the formation of bubbles within the polymer. Secondly, as the CO2 is removed the Tg increases again and so the polymer hardens. These two processes lead to the formation of three dimensional scaffolds containing a large number of interconnecting pores. The pores are vital for the flow of blood and other fluids and to provide a large surface for cell adhesion and growth. The size and distribution of these pores can be altered by varying the venting rate of the scCO2 and the polymers used. Studies have shown that this method successfully encapsulates drugs and biomaterials within the scaffolds without any reduction in their activity and they can facilitate the growth of cells.11 For example, scaffolds containing bone growth promoters can be inserted into critical bone defects (bad breaks) to encourage repair (Fig 3). 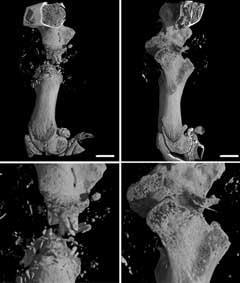 The implanted scaffolds, however, still need to entice bone (or other) cells to grow tissue, and this can be a slow process.13 An ideal solution would be to mix the right cells into the polymer before inserting this into the body. But would bone cells survive exposure to scCO2? We did some experiments and to our surprise found that if the period of exposure was kept to less than a few minutes, then quite a wide range of cells would survive exposure, and could be mixed into polymeric scaffolds. There are still many issues to resolve before commercially viable materials containing mammalian cells can be produced and this is part of our ongoing research. However, what we have shown is that these cells can be mixed with the scCO2 liquefied polymer, for a short period of time, and that as the scCO2 is vented we produce cell-loaded scaffolds. The potential of these systems is promising.

We acknowledge our collaborators K. Shakesheff and R. O. C. Oreffo who have equally contributed to this work.