The importance of weak forces

The answer to this question is that most molecules, including those involved in hydrogen bonding, are attracted to each other by these weak forces, and they can have a significant effect on the physical properties of the molecule. In an effort to get students to appreciate this, we ask them to propose why, at 1.0 atmos and room temperature, non-polar Br2 is a liquid with a boiling point of 58.8°C, while straight chain decane (C10H22) is a fluid that boils at 174°C. 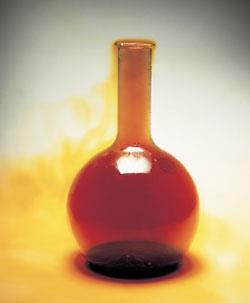 We start by defining polarisability as a measure of the ease by which the electronic environment of an atom or molecule can be distorted to produce an electronic dipole, which is a function of capacitance and has the SI unit of Cm2 V-1. We explain that as the polarisability increases, so do inter-atomic and inter-molecular forces of attraction and boiling points.1 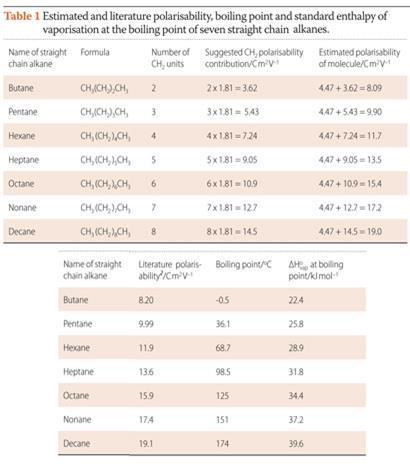 By studying Table 1 and Fig 1, students can see the correlation between an increase in the number of CH2 units, polarisability and boiling point. Students should also recognise that the cumulative effect of 'weak' London dispersion forces of attraction associated with each CH3 and CH2 unit can become large enough to cause some alkanes to boil at temperatures in excess of 100°C. 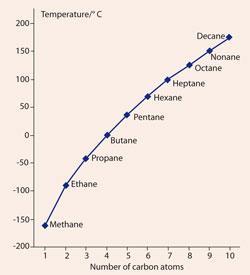 Moreover, as the distance between non-polar alkanes decreases and the polarisability increases, the standard enthalpies of vaporisation also increase, according to: 3,4

where Δ is the polarisability and r is the distance between two nuclei that are in separate molecules.

As the effectiveness of London dispersion forces of attraction increases, so do ΔH°vap and boiling points. The relationship between boiling point and enthalpy at one atmosphere pressure and with one mole of liquid may be mathematically expressed as:

For a branch alkane, the main chain is shorter than its straight chain geometric isomer, and has less surface area of close contact. Thus the branched chain alkane has less efficient London dispersion forces of attraction.8 Computer modelling demonstrates that the molecular surfaces of branched hydrocarbons have fissures and corners and the atoms involved with side chains are within the surface fractures and bends.7,8 Atoms in these locations do not increase the overall effectiveness of London dispersion forces of attraction. Table 2 reveals the differences in boiling points between C5H12 and C8H18 straight chain and branched molecules. 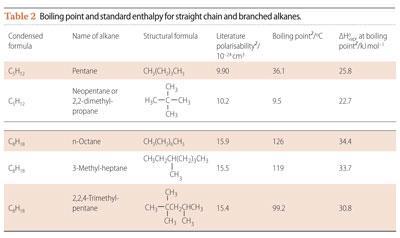 Thus the additive effect of the London dispersion forces of attraction associated with each CH3 and CH2 unit in different structures reflects the significance of these weak forces when studying or applying chemistry.

My thanks to the referees for their constructive comments on this article.