With the production of bioethanol from biomass ramping up globally, scientists are turning their attention to slashing the amount of waste produced during this process. Lignin, which makes up 20–30% of biomass, can’t be converted into this biofuel. And because it is difficult to do anything else with it, it is usually burned for energy. If scientists can figure out how to break it apart and separate its components, they would unlock the door to a range of valuable chemicals. However, this is proving challenging. 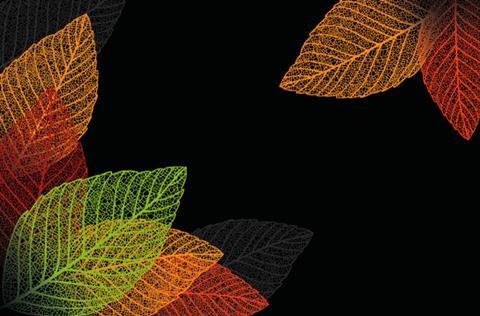 Although hemicellulose is also a sugar, traditional enzymes are unable to ferment its monosaccharides to ethanol. Instead, hemicelluloses degrade to lactic acid during the fermentation. Lactic acid is a valuable green chemical with lots of industrial applications.

Lignin can also be isolated from the residue left at the bottom of the distillation column using acid hydrolysis. But currently there is no useful purpose for this exceptionally hard material. Lignin is made of up to three aromatic polymer units – coumaryl alcohol, coniferyl alcohol and sinapyl alcohol. Which units are included and how they bond together depends on the plant species. Coniferyl alcohol, which is in all species, is dominant in conifers and softwoods; deciduous or hardwood species contain up to 40% sinapyl alcohol units; and grasses and agricultural crops consist mainly of coumaryl alcohol.

It’s this complicated structure that makes breaking down lignin difficult. The bonds that hold the lignin units together – ether linkages and carbon–carbon bonds – are very strong, and the lignin can’t be simply dissolved in water. Tom Welton at Imperial College London, UK, and his team have devised a route to break down lignin using ionic liquids (salts in liquid form).1 They discovered the anionic part of the ionic liquid can break the lignin’s bonds so it can dissolve in the liquid, becoming partially depolymerised. Tom plans to isolate the polymers and use them to make aromatic compounds.

Dutch company Biorizon is working on a project involving hydrolysing lignin by-products such as kraft lignin, which is produced as a by-product during paper manufacture. Once hydrolysed, the lignin’s components will be separated, producing phenol monomers and oligomers, and polymers. These could then be processed for various uses including as chemicals, surfactants, fuel additives and lubricants.

Another method capable of breaking down lignin is pyrolysis. ‘This tends to generate highly complex mixtures of products,’ says Tim Bugg of the University of Warwick, UK. ‘If you’re trying to get a single high value compound, it’s going to be very difficult to separate the mixtures.’ Tim uses a biological approach. He explains that lignin-degrading bacteria are capable of breaking down the mixtures to small numbers of compounds, which could then be manipulated to produce single products.

Scientists have been studying bacterial lignin breakdown since the early 1980s, in particular with white rot fungi. It was noticed the fungi destroy wood on the forest floor, in fences and wooden buildings by degrading the lignin. It has since been discovered the fungi produce enzymes called extracellular lignin peroxidases and laccases, and it is these enzymes that are responsible for attacking the lignin. 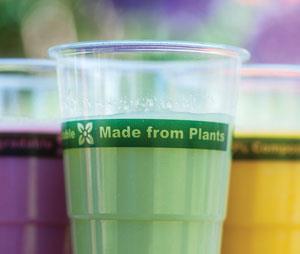 Biomass can be used as a renewable source of bioplastics

‘There were many reports soil bacteria could break down lignin but no specific enzymes had been identified,’ Tim says. To rectify this, his team developed an assay to monitor lignin degradation, testing the bacteria that had been mentioned in the reports. Their results agreed with the reports, and so far the team has identified a dozen bacteria with lignin-degrading activity from soil samples and two classes of bacterial enzymes within the bacteria that break down lignin.

Among these is the soil bacterium Rhodococcus jostii and, with help from Lindsay Eltis from the University of British Columbia, Canada, they found the enzyme in the bacterium responsible for lignin breakdown is a dye-decolourising peroxidase (DYP).2 They also found a DYP peroxidase in Pseudomonas fluorescens, a gram-negative bacterium that also breaks down lignin.3 Recently, the team identified the second class of enzyme in the soil bacteria Sphingobacterium – a manganese superoxide dismutase – which shows high activity in lignin degradation.4

Exactly what is happening between the enzymes and the lignin is still not completely clear. ‘We think there’s an initial oxidative cleavage, which must happen outside the cell, that generates fragments that must be taken up into the bacterium and broken down by degradation pathways,’ says Tim. ‘We don’t have a great understanding of exactly what those pathways are at the moment.’ Once the pathways are understood, they could be manipulated to get useful chemicals, he adds.

One high value chemical that Tim’s team did discover in lignin when working with Rhodococcus jostii is vanillin, which is used as a flavouring in the food industry. They had noticed vanillic acid in small quantities when analysing their broken down lignin with gas chromatography–mass spectrometry and liquid chromatography–mass spectrometry, which they suspected was formed by oxidation of vanillin.5 ‘Lindsay Eltis identified two genes responsible for oxidising vanillin to vanillic acid and demethylating it. He made gene knockouts for the genes (switching them off) and we found when we grew the gene knockout for the enzyme vanillin dehydrogenase on a mineral containing cellulose, it accumulated vanillin,’ explains Tim. ‘We accumulated about 100 mg per litre.’

In collaboration with Southampton, UK-based Biome Bioplastics, Tim is hoping to use his synthetic biology approach to generate specific chemicals that could be used to make bio-based plastics. These plastics would then come from a renewable source and should be biodegradable. But he needs to increase their yields to make the process commercially viable to compete with cheap oil-based plastics. Tim hopes the work will come to fruition in 5–10 years. ‘But it is hard. If it wasn’t hard, someone would have worked it out by now,’ he says.

Claire Halpin from the University of Dundee, UK, is taking another approach to lignin degradation. Her team either uses genetic studies to determine which genes in a plant give desirable properties or manipulates a plant’s genes to change its properties and analyses how the changes influence plant growth. 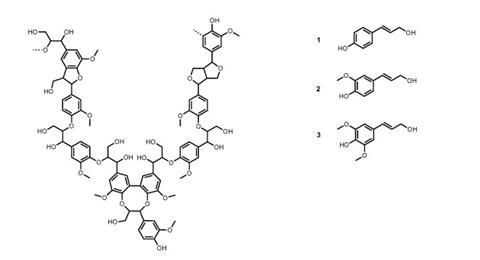 A section from a polymeric lignin chain, made up of three monomers: coumaryl alcohol (1), coniferyl alcohol (2) and sinapyl alcohol (3)

One of their projects is to investigate which genes, or combinations of genes, in barley make it easier to extract lignin to improve the yield of sugars from cellulose to make biofuel. They analyse different populations of barley to pinpoint where in the barley genome to find the genes that influence lignin content, lignin composition or the release of sugars for biofuel production. ‘We either isolate or generate mutants for specific genes that we knock out (switch off the gene’s function) or, more often, we’ll use genetic manipulation to block the expression of a specific gene,’ she says. Gene expression is when information from a gene is passed on in the synthesis of a gene product. There are 11 different enzymes on the lignin-forming pathway and Claire’s team has blocked each one in turn to find out their roles in the plant and to look at how the lignin is altered and the effect on the plant.

Cinnamyl alcohol dehydrogenase (CAD) is one of the enzymes on the pathway. It appears in the last stages of lignin formation, converting aldehydes into the final alcohols that come together to make up the lignin. By blocking CAD from working, Claire’s team found the aldehydes replace the alcohols in the final lignin. ‘The plant is perfectly happy, it grows normally, but you get a lignin with a lot more aldehydes than it would normally have,’ says Claire. They found this one change made the lignin easier to break down.

The team has to be careful not to change a plant’s properties too much, though. In the case of biofuel production, the lignin needs to be broken down easily but still be strong enough to support the plant. ‘The lignin has other roles too. It waterproofs the conducting vessels to make it easy for the plant to transport water – you don’t want to impair that function,’ says Claire. ‘It also has a role against disease, so you don’t want to impair that function either.’

GM regulations are another consideration when carrying out genetic experiments; they do limit the types of experiments that can be carried out. The plants have to be completely contained in a greenhouse so there is no chance the pollen or seeds or any other part of the plant that can propagate can escape to the environment. ‘We can do most of the work we want to, but not all of it,’ says Claire. If a plant is grown in a greenhouse, with controlled temperature and light, there is no way of telling how that plant will react when exposed to the elements. ‘You’re giving it quite nice conditions to grow in. It’s quite often the case that you don’t see a big difference in the way it grows when you start manipulating things. If you put a plant out in a field environment where the conditions are constantly changing and they’re a lot harsher than they are in a greenhouse, that’s when you begin to see if you’ve had any effect on how the plant grows. That’s the experiment we can’t do.’ 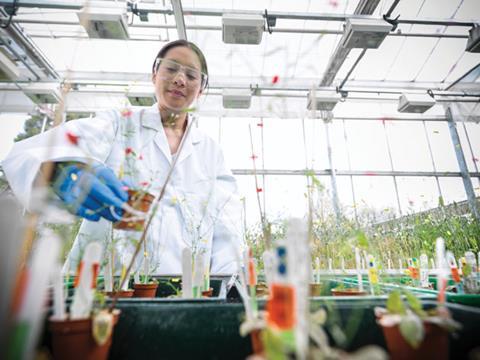 Claire is also keen to look at ways to extract valuable chemicals from lignin. With 11 different enzymes involved in the pathway to lignin, there are many different chemical intermediates that can be formed along the way, she says, and the pathway can be blocked at various points to build them up. ‘We know what the chemicals are. What’s less clear is which ones might be valuable in industry,’ she adds. Her challenge then will be to separate the products from the mixture and to get yields high enough for commercial use.

Finding ways of using lignin as a renewable source of valuable chemicals is an important goal for scientists around the world. ‘In the UK, we tend to work on wheat straw as our substrate as there’s a lot of wheat around; in Scandinavia, it’s wood; in Brazil, it’s sugarcane bagasse; in South East Asia, it’s rice. In principle, the technology that we develop should in theory be transferable from one feedstock to another,’ says Tim, who adds that no matter what the approach is, scientists can work together. Genetic manipulation ‘could be used along with any technology that we develop. It’s not necessarily a competition’, he says. Claire adds that overall, the lignin pathway in different plants is similar and the same genes are involved, which means it’s easier to research, and work on one plant can be transferred to other plants. But despite being ready to investigate chemically useful products for industry or other applications, Claire says it is very difficult to obtain funding. ‘It’s a very competitive environment. We must put in a winning proposal,’ she says.