Titan - a museum of the Earth's atmosphere 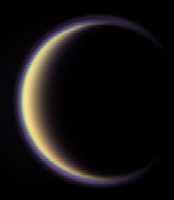 Titan and its mysterious atmosphere

Interest in the composition of Titan's atmosphere initiated the Cassini-Huygens mission in 1997, which reached the Saturnian system in 2004. The Huygens' probe (named after the Dutch astronomer who discovered Titan in 1655) was deployed from the Cassini orbiter on Christmas Day 2004 and began its brief two-hour journey through Titan's atmosphere on 14 January 2005. On board was a range of instruments designed to probe both the composition of the atmosphere and the aerosol haze that shrouds Titan.2 Data from Huygens should be able to answer many of the questions posed by astronomers over the years, including: What is the nature of Titan's surface?; Are there lakes of liquid hydrocarbons or volcanoes spewing material into the atmosphere?; and What is the composition of the atmosphere and aerosol? But possibly the one major unanswered question is: Does Titan's atmosphere contain amino acids or other precursor molecules of life?

The main components of Titan's atmosphere are N2 and CH4. Chemical reactions initiated by uv sunlight readily produce CN• radicals and simple alkenes such as ethene and propene. The reaction of CN• with alkenes is one possible route to the formation of more complex organic species containing C, H and N atoms. CN• radicals can react with ethene via three different reactions:

Reaction (i) doesn't couple CN• and the alkene, but leads to the formation of HCN. Reactions (ii) and (iii) do produce more complex C/H/N-containing molecules, but with different functionality. The major goal of some of our recent research has been to investigate which reaction dominates.

The conditions of Titan's atmosphere, however, pose an interesting question for chemists. How do we account for the substantial chemistry that takes place in Titan's atmosphere where the maximum temperature is a shivering 186K (-87°C) - bearing in mind there are activation barriers to most reactions and that such reactions slow down at low temperatures.

In 1889 Svante Arrhenius was the first to quantify empirically the relationship between temperature and the rate constant (k), ie:

Cassini-Huygens on its way

Thus a reaction with a modest 20kJmol-1 activation enthalpy will occur 3.5 billion times slower close to the surface of Titan (80K) compared with ground temperatures on Earth. So how do we explain the chemistry occurring on Titan? Activation enthalpies are associated with breaking bonds in the reagents. If bonds can be broken in other ways radicals, such as CH•, CN• and CH3•, can be generated which can react without activation barriers and are thus not temperature-dependent. In planetary atmospheres (including our own), the Sun is the major source of radicals.

Solar radiation extends in wavelength well below the visible region, and the upper regions of all planetary atmospheres are exposed to harsh, higher energy uv radiation that is capable of breaking bonds and generating radical species. In Titan's stratosphere, for example, methane can be photolysed to form methyl radicals:

The recombination of two methyl radicals to form ethane is a good example of a reaction that proceeds without an activation barrier:

There is no activation barrier for this reaction because no bonds are being broken, only a new C-C bond is being formed. However, other more interesting radical-radical and radical-molecule reactions also occur with either a zero or negative temperature dependence. An example is the reaction of CN• radicals with ethene:

The first step in the reaction is the addition of CN• to the double bond, forming a new bond. For this reaction the enthalpy balance between forming the new C-C bond and breaking the n-system lies in favour of new bond formation, so there is no barrier to the formation of the transition state.

To study the reaction in the laboratory we slowly flow ICN (our CN• radical precursor), ethene and an inert gas through a reaction cell. We initiate the reaction with a short (~50ns) pulse of uv laser light to break apart the ICN molecule to give us our CN• radicals:

Another laser is used to monitor the concentration of CN• radicals as they react with excess ethene. The experiments produce traces like those shown in Fig. 1 from which we can obtain the rate constant for the reaction. The reactions are easy to study at room temperature. High temperature results can be produced using a heatable reaction cell, low temperature data can be obtained by surrounding the cell with a suitable coolant (eg solid CO2/propanone, 195K); we have also used liquid nitrogen (77K) in some experiments. More complex apparatus is available to study the kinetics of reactions at very low temperatures based on the cooling of gases during expansion processes. The record low temperature for a gas phase kinetics experiment stands at 7K.3

Figure 2 shows a summary of experimental data on reaction (i), revealing the increase in rate coefficient with decreasing temperature. (Note: all three research groups reported a negative temperature dependence, but the magnitudes of the dependence vary.) In the absence of an activation barrier, the limiting process is now how efficiently the molecules attract/collide with each other and this tends to increase in effectiveness at lower temperatures. Theoretical models are becoming available to interpret the data and to extrapolate measurements to extreme temperatures found in, for example, interstellar chemistry (~10K) or combustion chemistry (~2000K).

Earth-based observations and the 'fly-past' Voyager missions of the 1980s revealed the presence of a range of simple organic compounds in Titan's upper atmosphere. Compounds containing carbon, hydrogen and nitrogen are of particular interest, but how do they form?

High in the atmosphere of Titan, N2 is broken up via the impact of high energy electrons from Saturn's magnetosphere (the magnetic field surrounding Saturn). Nitrogen atoms are rapidly converted to CN• radicals and the reaction of CN• with unsaturated hydrocarbons can result in more complex C/H/N-containing molecules. Returning to the CN• + C2H4 reaction, we still need to establish which reaction dominates, ie (i), (ii), or (iii). An earlier study suggested reaction (i) was dominant, with only a minor (~20 per cent) fraction coupling the radical and molecule together via pathway (ii), and at the low pressures of Titan's stratosphere, pathway (iii) would be insignificant.

Despite their importance, much less is known about the branching ratios of multiproduct reactions than about the overall kinetics (how quickly CN• reacts with ethene). Branching ratio studies are much harder. If we choose the conditions correctly then we can obtain kinetic information from measurements of relative concentration of CN• radicals, but branching ratio studies require absolute concentrations of radical and product species, a more difficult task requiring extensive calibrations, often of several different laser systems.

Figure 3 (a) shows that the CN• removal and H• atom production via reaction (i) are occurring on the same timescales as would be expected if H• is a direct product of the reaction. In the experiment we monitored the amount of H atoms generated from the calibration reaction and then replaced H2 with ethene, keeping the concentration of CN• generated in the laser pulse constant. A comparison of the two H• atom signals, as shown schematically in Fig 3 (b) yields the branching ratio. (The branching ratio for the reaction can be read off as the height of the test reaction signal to the calibration reaction signal. In this example approximately 70 per cent of the reaction leads to H• atoms.) Our experiments revealed that the branching ratio for reaction (i) is essentially 100 per cent and thus reaction (i) appears to be a good way of generating complex C/H/N-containing molecules.4

We are currently looking at the next reactions in the series:

Interestingly, the H• atom yield from reaction (viii) is only about 50 per cent (and is pressure dependent) and drops to zero for reaction (ix). We are looking to see whether it is HCN production or adduct formation that replaces the H• atom-producing reaction. 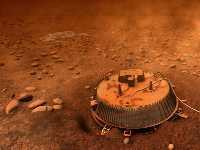 What secrets will Titan reveal to the Huygens' probe?

To explain the compositional information provided by the Huygens' probe, scientists will need to construct a model that explains how complex molecules are formed from the basic nitrogen and methane starting materials, how compounds are transported within the atmosphere and eventually removed into the aerosol phase or deposited to the surface. An important component of such models is the kinetic and branching ratio information.

Examples of such models already exist based on measurements from the Voyager probes of the 1980s and Earth-based observations. These models will be updated and adapted in the light of the more detailed Huygens' data. However, despite the massive improvement in the quality of data available from the Huygens' probe, chemists will still want to test and examine the chemical mechanisms in controlled environments. For example, there may be more than one chemical route to a particular compound; which route dominates? To test atmospheric models we require simulation facilities where we can mimic the environmental conditions of the planet and then deploy a range of observational techniques, for example to observe the intermediates that would confirm one reaction mechanism over another.

Such facilities have long been available to simulate the Earth's atmosphere and range from large outdoor chambers using the Sun as a light source, to smaller laboratory-based systems using artificial photolysis lights. Currently a novel chamber is under construction at the University of Leeds. As well as having the conventional analysis equipment such as IR spectrometers and gas chromatography for the analysis of stable molecules, the Leeds HIRAC (Highly Instrumented Reactor for Atmospheric Chemistry) instrument will also have the capability to observe many of the radical intermediates that have been shown to be so important in the Earth's atmosphere. In the future we hope to develop HIRAC to mimic not just the Earth's atmosphere, but also to provide the conditions necessary for testing the mechanisms relevant for Titan and some of the other outer planets.

Understanding the chemistry present in complex systems such as planetary atmospheres requires interactions between designers of mechanisms, laboratory measurements, observations and simulations. Combining all these facets together, often in combination with information from other scientific disciplines should give us a fuller picture of such systems allowing us to answer important questions such as 'How did the precursor molecules for life form?'.

The data from the Huygens' mission will be invaluable in answering this question and ascertaining whether Titan is indeed a museum of the Earth's pre-biotic atmosphere. If this does prove to be the case, then Huygens will have been the first, but hopefully not the last, visitor to the most exotic museum in the solar system.

Dr Paul Seakins is a reader in the school of chemistry at the University of Leeds, Leeds LS2 9JT (e-mail: p.w.seakins@chem.leeds.ac.uk).

Acknowledgements: experimental data on the CN reactions were obtained by Dr Mark Blitz, Dr Namil Choi and Kelly Gannon. Dr Andrew Goddard, David Glowacki and Khuanjit Hemavibool have worked on the design of the HIRAC chamber. EPSRC and NERC are gratefully acknowledged for funding.

The Huygens' probe and Cassini orbiter prior to launch

Box 1 - On board the Huygens' probe

For information on the complete Cassini mission.