Mary Kirchhoff is the new director of education at the American Chemical Society (ACS) in Washington DC. In setting out her stall, green chemistry and sustainable development look set to play a major role in the development of chemical education in the US 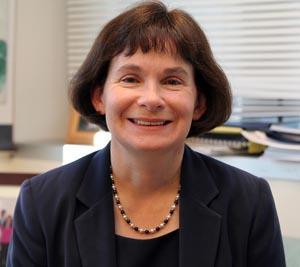 Mary Kirchhoff, director of education at the ACS

Mary Kirchhoff has an admirably relaxed yet stoic approach to the job in hand. As the newly appointed director of education at the ACS she has her sights set on two major goals. She believes strongly that chemistry should be taught in context to all students so that they understand its relevance to their lives. She is particularly keen to see green chemistry, a subject she has had a long association with throughout her career, promoted in the undergraduate curriculum. As industry gets greener, she says, it will expect the people hired to have some knowledge of this subject. And she is eager to collaborate with other organisations and individuals on national and international levels. Education at the ACS, which has had a rather insular reputation in the past, looks set to embrace new partners and broaden its footprint under Kirchhoff's leadership.

Kirchhoff takes up her position with a bit of an advantage. She had already been doing the job for the previous 12 months or so. In November 2005 she was appointed 'acting director' of education at the ACS, taking over from Sylvia Ware who had been director of education for some 18 years. The ACS chief executive, Madeleine Jacobs, decided this was a good time to take a look at what the ACS was doing in education before appointing a new director. Kirchhoff, who had been working with Ware for several years was asked in the interim to run the division as 'creatively and as imaginatively as possible'.

The ACS, like the Royal Society of Chemistry (RSC), has a governing body and a staff body. The Society Committee on Education (SOCED) is responsible for most of the education programmes, spanning the spectrum of chemical education, in the education division. Since school chemistry is locally controlled in the US by town, city or state, the ACS focuses here on providing resource materials, specifically textbooks, and running national events for teachers and students. In addition, the Society runs a summer programme (Project SEED) for economically disadvantaged students to introduce them to research and science and encourage them to go on to college.

Undergraduate education is a big area for the ACS education division. Within the division there is an Office of Professional Training (the staff function) which works with the Committee on Professional Training, the body that is responsible for approving the 'guidelines' for undergraduate programmes in chemistry. The guidelines define what is considered to be excellence in undergraduate education, identifying for example what is expected in terms of the curriculum, the number of contact hours, standard equipment required of an undergraduate laboratory, the need for professional development etc. Last year, the Committee of Professional Training produced revisions of the guidelines for undergraduate programmes. The most significant change, according to Kirchhoff, has been to the curriculum itself. The proposals recommend that more flexibility is introduced into the curriculum, which she hopes will encourage a broader range of subjects to be taken at this level. The division also runs a student affiliate programme, which has some 10,000 members, many of whom are involved in outreach activities in schools for example.

Kirchhoff admits as 'lady-in-waiting' this was a busy and challenging year. As well as overseeing the many on-going projects that the division has responsibility for, there were a few new initiatives she wanted to pursue.

'There has been a growing concern within US Government of falling standards in science and mathematics among primary and secondary students', she said. 'US students do not perform very well in these subjects in international exams. Much of the problem at this elementary level can be put down to the fact that many teachers who teach chemistry at this level don't have a qualification in chemistry. So we put together a new programme funding request to create teacher institutes for middle school teachers that would help them to become 'masters' in teaching chemistry whatever their background'. The ACS supported the concept but recommended that such an initiative would be best served on a larger scale. The ACS will explore the possibility of creating a larger initiative with other scientific societies.

The 'increasing globalisation of the chemical industry' provided Kirchhoff with another challenge. How do you prepare students to be more comfortable in the global environment? How do they learn to collaborate with people with stark cultural differences and which they have very little knowledge of? 'Working with the International Activities Office at the ACS', she explained, 'we submitted a proposal to the National Science Foundation (NSF) for funding undergraduates to do research in countries outside the US during their summer vacations. The UK, Italy, Japan and South Korea were initially targeted because the ACS has good links with the chemical societies in these countries'. The idea, explains Kirchhoff, came from the German initiative RISE (Research Internships in Science and Engineering), whereby undergraduates from the US and Canada spend 8-10 weeks in the summer doing research in a German university or institute. NSF is currently supporting a pilot study based on a German collaboration. Such 'international undergraduate' initiatives are high on Kirchhoff's agenda now that she is in-charge.

Kirchhoff is also keen that the ACS does more for its graduate members, and is looking to develop more programmes specifically for them. A consultation last year revealed that they had little access to information on what it's like to work in industry. This led to Preparing for life after graduate school, a workshop which includes presentations from industrialists on what they do, and sessions on writing CVs, case studies, interviewing techniques etc. A new graduate initiative that she is particularly proud of is the recently formed Graduate Student Symposium Planning Committee. A group of graduates, she explained, 'self assembled' to organise their own symposium at ACS national meetings. 'I think it's very exciting. The graduates recognised that they needed more professional opportunities and decided to do something about it. This has given them the opportunity to use a range of skills - organising, planning, contacting speakers, fund raising.'.

Programmes aimed at the professional development of university teachers and the development of resources for two-year colleges have also been identified by Kirchhoff as areas where the ACS could do more. Never far from her thoughts, however, is her interest in green chemistry. Green chemistry has formed a major part of her own career. On finishing her PhD at the University of New Hampshire in 1992, she went straight into teaching, at Trinty College, a small women's college in Washington DC. After six years she applied for and received a AAAS (American Association for the Advancement of Science) fellowship to work at the Environmental Protection Agency (EPA) on its green chemistry programme.

For the next three years she split her time between teaching at Trinity and working at the EPA. At the EPA she ran its Presidential Green Chemistry Challenge awards, a joint initiative with the ACS, and was project manager for its annual Green Chemistry and Engineering conference. In 1998 the EPA together with the ACS began to develop green chemistry educational materials for undergraduates, and this came under Kirchhoff's remit.

In 2001 the ACS formed an alliance with the Green Chemistry Institute and Kirchhoff moved from Trinity College to become the institute's assistant director. In 2003 she organised the first annual Green Chemistry Summer School for graduate students and postdocs, which are now a well-establish part of the ACS calendar. 'For me this is one of the year's highlights. Students are for the most part passionate about the environment and green chemistry gives them the opportunity to practise chemistry in a way that is beneficial to the environment. Every year we have at least one student who says this has been a life-changing experience, and some even manage to convince their professors to introduce some green chemistry experiments into their schools. Occasionally they comment that the programme has changed the way they look at their research.'

In 2004 Kirchhoff moved to the education division at the ACS to become assistant director for special projects. She continued working on green chemistry, though her remit was now wider. At this time she became green chemistry editor for the Journal of Chemical Education, a job she still holds.

As director of the ACS Kirchhoff is still very interested in promoting green chemistry through ACS curriculum materials and various programmes. Recently she has been in discussion with the NSF to try and persuade them to fund a similar programme to the Green Chemistry Summer Schools in China. 'I think it is critically important to try and make green chemistry and sustainability more embedded into the undergraduate curriculum. With the chemical industry growing at such a fast rate in China, having Chinese and US students working together on the global impact of chemistry and looking at greener technologies would be a step in the right direction'.

Meanwhile Kirchhoff plans to continue collaborating. 'Many of us share similar problems and similar goals. We all want excellence, we all want the best for our students, and working together and sharing ideas and resources will help us to influence national agendas and national funding priorities'.