What ignited the Hindenburg?

The heyday of rigid airships came to an abrupt end when the German passenger airship LZ 129 Hindenburg crashed in New Jersey, US, in 1937. It caught fire while attempting to dock with its mooring mast, killing 13 passengers, 22 crewmen and one ground worker. Previous airship crashes had claimed more lives (73 died on the USS Akron in April 1933 and the British R-101 took 48 souls in October 1930), but the Hindenburg disaster attracted more publicity as it was caught on film, and the debate surrounding what sparked the disaster continues. 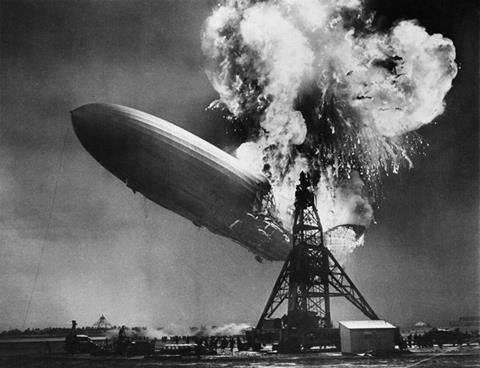 The Hindenburg class of airships had duralumin (aluminium alloy) frames. Limited by the size of the hanger in which they were constructed, they were 245 m long and 41 m in diameter. Even so, they were longer than three Boeing 747s placed nose to tail. The outer skin, or envelope, enclosed 16 gas bags containing hydrogen (numbered 1 to 16 from stern to bow) that were separated by bulkheads reminiscent of Ferris wheels. Longitudinal girders placed around their circumferences braced the bulkheads to each other. The airships’ designers wanted to use inflammable helium as the lifting gas (which makes the ship buoyant) but it was scarce and the US, responsible for 80% of global production, banned its export under the Helium Control Act of 1927. So the Germans were forced to use flammable hydrogen.

In common with other airships of the era, the cotton outer skin was varnished with ‘dope’, a plasticised lacquer. This made the woven fabric airtight and kept it taught, reducing flutter and aerodynamic drag. The silver colour of the Hindenburg was a result of aluminium powder mixed with the dope and painted onto the outer surface to reflect sunlight to prevent the hydrogen warming up, expanding and escaping. A layer of iron oxide was applied to the inside top half of the outer skin to absorb ultraviolet radiation and prevent it destroying the cotton gas bags inside. 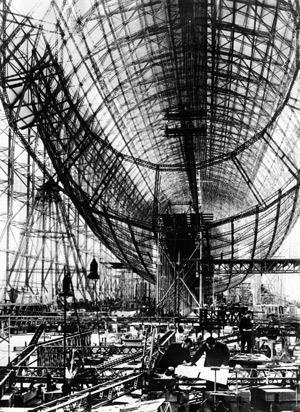 In the 1920s, Zeppelins regularly crossed the Atlantic. By 1929, they were circumnavigating the globe in a little over three weeks. On 3 May 1937, the Hindenburg set off from Frankfurt, Germany. It arrived at Lakehurst, close to New York, three days later. Headwinds had extended its Atlantic crossing by about half a day and thunderstorms delayed its final approach. Ground handlers grabbed hold of the landing lines dropped from the bow of the ship. Four minutes later, at 7.21 pm, the Hindenburg burst into flames and crashed to the ground in just over half a minute. Though there seems little doubt the hydrogen lifting gas caught fire, what actually started the fire has been debated ever since.

Various witness testimonies suggest that hydrogen was escaping from one of the rear gas bags, causing the stern of the Hindenburg to sink. R H Ward, who led the port bow landing party, noticed ‘a wave-like fluttering’ of the outer skin, consistent with the escape of hydrogen from gas bag 4. This was either because a gas valve had failed to close properly or because the bag had been punctured, which might have been caused by a bracing wire snapping under the load of a sharp turning manoeuvre on the ship’s final approach. Captain Albert Sammt tried to correct the trim of the airship (adjust its balance) by venting hydrogen from cells 11–16 (in the bow) for 30 seconds, dropping 1100 kg of water ballast from ring 77 in the tail and, when this failed, he ordered six crewmen forward to the bow. Both the released and escaping hydrogen passed into the gas exit shafts between the gas bags before leaving the top of the airship. The 1937 Board of Inquiry into the disaster concluded this hydrogen was ignited by static electricity.

Hydrogen is flammable in air over a much wider range of concentrations than petrol and diesel. Hydrogen can even explode when mixed with air in the right proportions. In order to control buoyancy, hydrogen was released from the gas bags into the ventilation or exit shafts between them. In the process, the hydrogen would have passed through the full range of concentrations, before escaping out of the top of the airship. This was an accident waiting for an ignition source and the energy required is equivalent to dropping a 5 g pencil from less than the thickness of a coin.

There have been many candidates for ignition, including engine failure, but sparks from the engine exhaust would not have exceeded 250°C and the ignition temperature of hydrogen is 700°C.

The Hindenburg was making a high landing, known as a flying moor, and would have dropped its landing ropes and winching cable so it could be winched down the mooring mast. A popular misconception is that when ground crew members ran to take the landing ropes, they effectively ‘earthed’ the airship, causing a spark. However, the Hindenburg did not burst into flames for another four minutes. Besides, ground handlers would have known to wait for the landing ropes to touch the ground to allow any charge to flow to earth or risk electrocution.

However, there might well have been a build-up of static electricity on the airship caused by friction as it moved through the air, the so-called triboelectric effect. The skin was separated from the duralumin frame by ramie lacing cords. Ramie (Boehmeria nivea) is a flowering plant from the nettle family and among the strongest natural fibres. But ramie is an electrical insulator so a potential difference could have been created between the skin and the frame and a spark between the two could have ignited the hydrogen.

Following the demise of the Hindenburg, design modifications were made to her sister ship, the Graf Zeppelin II (LZ 130), which was still under construction. Bronze and graphite were added to the skin and ramie cords to increase their electrical conductivity and reduce their flammability. Measurements of static charge were also made during test flights, suggesting the static charge hypothesis was taken seriously.

As the outer skin of the Hindenburg was varnished with dope impregnated with aluminium, this led former NASA scientist Addison Bain to claim it was covered in rocket fuel. However, most experts believe the only viable oxidiser – the iron oxide applied inside the skin – was not in close enough proximity to the aluminium to ignite. The fact that hydrogen flames were observed shooting through the bow before the surrounding skin ignited also rules out this scenario.

Undaunted, Bain then suggested the dope contained both aluminium powder and iron oxide, which are ingredients for the highly exothermic thermite reaction:

However, in order for the reaction to work, three parts iron oxide powder has to be mixed with one part aluminium powder. The Hindenburg would have required at least 15 times more iron oxide to achieve the correct ratio and this would have made it too heavy to fly.

The TV documentary Secrets of the Dead: ‘What Happened to the Hindenburg?’ shows an experiment by Bain on a small sample of the Hindenburg’s outer skin, recovered from the crash site. The result suggests that, in the absence of hydrogen, the whole outer skin would have taken about 40 hours to burn completely. However, Bain has never suggested the hydrogen did not burn; he simply suggests the skin provided the kindling that made the fire possible.

Hydrogen burns with an almost invisible flame. While no colour photographs were taken of the Hindenburg disaster, flames are clearly visible on the black and white images. This does not mean that hydrogen was not burning, as some commentators have suggested, but that some of the material (fabric etc) was also burning. It is also possible the structure was acting as a ‘mantle’. A mantle is the part of a gas lamp that glows to emit light. Most flammable gases burn without colour but the burning gas generates the thermal energy that excites the atoms in the mantle.

Mark Heald of Princeton University saw a glow, known as St Elmo’s fire, flickering along the airship’s back before the fire broke out. The glow is named after the patron saint of sailors; they  believed the appearance of glowing balls of light around the tops of masts and rigging had religious significance. St Elmo’s fire is a continuous electrical spark called a ‘corona discharge’. It is caused when strong electric fields, typically in excess of 30,000 V cm-1, turn neutral gas into plasma: positive ions and negative electrons. As the electrons fall back into nitrogen and oxygen atoms, photons corresponding to blue or violet light are emitted, leading to the glow observed by Heald. St Elmo’s fire is often associated with thunderstorms and it is well documented that storms had postponed the airship’s landing. Heald didn’t testify at the original inquiry. 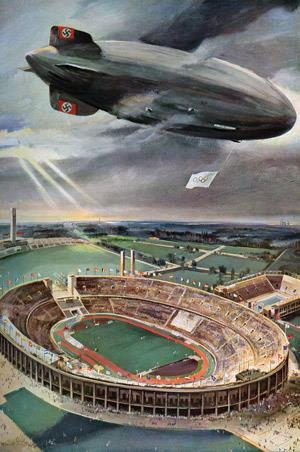 USS Akron contained helium as a lifting gas but, in common with other contemporary airships, it was doped with aluminium powder. It crashed in stormy weather without bursting into flames, suggesting that aluminium was not relevant but that hydrogen might have been significant in the Hindenburg disaster. Apart from those who cling to sabotage conspiracies, it is accepted that a spark ignited the Hindenburg inferno.

My experience is that lighting a camping stove with sparks from a fire steel takes longer than using a continuous flame from a lighter. By analogy, the corona discharge witnessed by Heald could be the most likely source of the Hindenburg spark and this would perhaps have been the conclusion of the inquiry had he testified. Given that it has such low ignition energy across a wide concentration range in air, it seems likely the hydrogen was ignited directly rather than via the airship’s skin.

Notwithstanding that modern materials would make it easier to make leak-tight gas bags and prevent potential differences building up between different parts of the ship, the danger areas are where hydrogen mixes with the air at vents, which is why modern airships, such as those used for advertising for example, use helium. At the time of the Hindenburg disaster, passenger airships were already experiencing competition from faster fixed-wing airliners so the accident hastened the end of an era. Even so, thanks to the newsreel and the dramatic commentary, the disaster and the role hydrogen played are remembered almost 70 years later.

Mike Follows is a teacher at King Edward’s School in Birmingham, UK