What's in your strawberries? 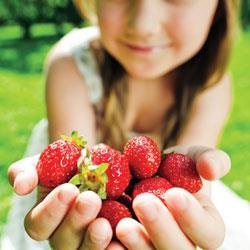 Doubtless God could have made a better berry, but doubtless God never did', said a 17th century writer. This view is shared by many, especially Wimbledon spectators who eat around a million strawberries, ie nearly 30 tons, in a fortnight.

Modern cultivated or garden strawberries (Fragaria x ananassa) are a hybrid species derived from a fortuitous cross between a Chilean and a North American species. They were first bred in Brittany in France in the 1750s. The strawberries we buy in shops are all cultivars (or varieties).

Have you ever wondered what makes the colour, taste and smell of strawberries so attractive? Why do the ones you might find growing wild seem tastier? Is there something in the chemistry? These are questions close to the heart of strawberry producers as they call on science to help them develop their sweetest, juiciest, most fragrant and appealing fruit. 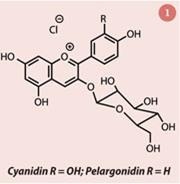 The colour of strawberries is due to anthocyanins, mainly pelargonidin 3-glucoside (fig 1). Anthocyanins are water soluble pigments found in plant cells. They are also responsible for the red colour in some autumn leaves. Aside from this, anthocyanins can be used as pH indicators - they are pink in acid, purple in neutral and yellow in alkaline solutions.

Strawberries are highly nutritious. They contain very high levels of vitamin C and anthocyanins are also powerful antioxidants, which give strawberries huge health benefits. Some 90% of a ripe strawberry is water, but it also contains sugars, about 80% of which are glucose and fructose. Most vitamin C is made from glucose via the so called 'L-galactose pathway'.1

As consumers, we look for the right combination of sweetness, acidity and flavour in our strawberries. The flavour depends on the balance between several molecules.

As strawberries ripen, their sugar content rises from about 5% in unripe green fruit to 6-9% on ripening. The acidity comes mainly from citric acid which comprises about 88% of the acid content, along with malic acid and ellagic acid. When they ripen, the acidity decreases. As the sugar/acid ratio changes, so ripe strawberries taste sweeter.2 The ripening process is controlled by the hormone auxin. When this reaches its peak, it causes the cell wall to begin to degrade and so a ripe strawberry becomes juicy as well as sweet.

Sniffing out the aroma 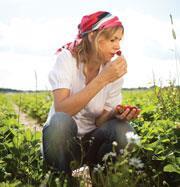 Over 350 different volatile molecules have been identified in strawberries and scientists have identified those which contribute to the aroma (known as odorants). To do this, they extracted these molecules from fresh strawberry juice, and identified those with the highest Flavour Dilution (FD) factors (table 1).3 The FD is the amount that the extract can be diluted while the odorant can still be detected.

To find out which odorant contributed to each type of aroma, they made a model juice containing each of the odorants at the same concentration found in the original juice extract. Sensory testers agreed that this model closely matched the real extract.

The next step was to identify each of the individual aromas. They did this by making a series of new mixtures, each containing 11 of the 12 main odorants, with a different molecule missing from each. The testers could therefore find out if omitting that molecule made any difference to the odour. For example, leaving out 2,5-dimethyl-4-hydroxy-3(2H)-furanone (1) or (Z)-3-hexenal (3) was noticed by virtually all the testers, and omitting esters like methyl butanoate, ethyl butanoate or ethyl 2-methylbutanoate were also spotted by most.

This analysis led to the characterisation of five basic sensory impressions of strawberries: caramel, fruity, green, lactone-like and buttery.

Esters are molecules which are well known for producing flavours and aromas. They are very abundant strawberry volatiles, in some cases comprising over 95% of the total, with methyl butanoate (4), ethyl butanoate (5), butyl ethanoate, methyl hexanoate, and ethyl hexanoate usually most abundant.

Only a few esters individually make key contributions to the aroma, as their aroma thresholds (the concentration below which the molecule cannot be smelt) vary enormously. For example, the aroma threshold for butyl ethanoate is 5000 ppb, but is only 0.13 ppb for its isomer, ethyl butanoate.

Different cultivars produce different amounts of esters as well as different proportions and so the ratio of ethyl and methyl esters depends on the genotype and the year, as well as upon growing conditions. In the fruit, esters are formed from the reaction between an acyl coenzyme A (acyl-CoA) and an alcohol, catalysed by the alcohol acyltransferase enzyme (AAT; fig 2). As the fruit ripens, AAT activity increases. It is those cultivars with highest AAT activity that produce most ester and so have the strongest smell.4 There are also some lactones (cyclic esters) present in strawberries which contribute to their aroma, notably γ-decalactone and γ-dodecalactone.

The 'green' note identified by the scientists comes from the breakdown of certain fatty acids which produces several C6 molecules, (Z)-3-hexenol, hexanal, (E)-2-hexenal and (Z)-3-hexenal (3). The last of these also produces the smell of freshly cut grass and is a key contributor to a fresh strawberry smell.5

Of course, as consumers, what we strive for is the perfect strawberry which tastes and smells wonderful and looks inviting. For those breeding strawberries, this means finding a suitable balance of flavour. Varieties or cultivars with poor flavour generally lack esters and may also contain large amounts of the furanones and lactones. Too much lactone can cause a disproportionate peach note.

Producers aim for strawberries offering high yields of big fruit, good appearance, high disease resistance and a long shelf life. However, inbreeding to achieve these characteristics produces commercial strawberries with a narrow genetic base, at the cost of the loss of flavour molecules. Perhaps this is a clue to why people say that wild strawberries taste better and have better aromas than cultivated strawberries? 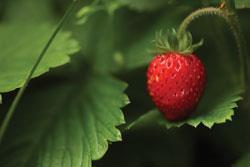 Compared with cultivated strawberries, the wild species have higher aroma intensities and significantly richer flavours, because they contain greater quantities of odorous molecules, including some extra ones.

In a comparison test between the cultivated variety Fragaria x ananassa Elsanta  and the wild Fragaria vesca, scientists found that the cultivated strawberry contained only two terpenoid (highly aromatic) molecules but a wide range were present in the wild sample including α-pinene, β-myrcene, α-terpineol and β-phellandrene as well as myrtenyl acetate and myrtenol.6 These cause the smell of essential oils found in plants such as conifers and herbs such as myrtle and bay which all have strong aromas and flavours.

The usual method of analysing and measuring flavours and aromas in foods is to carry out a headspace analysis. In this technique, samples are sealed in glass containers and the gas given off is analysed by gas chromatography-mass spectrometry.

Compared with cultivated strawberries, the wild species have higher aroma intensities and richer flavours, as they contain greater quantities of odorous molecules, including some extra ones like methyl anthranilate. Back-crossing with cultivars gives smaller berries with aromas more like wild strawberries.

Finally, something to try out for yourself - researchers have found that adding cream to raspberries markedly reduces the concentrations of flavour volatiles.7 The corresponding experiment with strawberries does not seem to have been reported...