Between 1989 and 2006, Nike relied on chemists to solve a problem with its Air shoes. The ‘air’ putting the bounce in the soles of its iconic trainers was sulfur hexafluoride (SF6), a greenhouse gas thousands of times more potent than carbon dioxide, and the sports brand was searching for something less environmentally damaging.

SF6 gas makes the perfect filler for sports shoes – and balls – because it’s unreactive and, as a sizeable molecule, doesn’t leak out easily. In 1978, an Ohio company filed a patent for SF6-filled tennis balls, claiming that the balls would remain pressurised a lot longer than if they were filled with air alone. But its lack of reactivity also influences its ability to warm the planet. 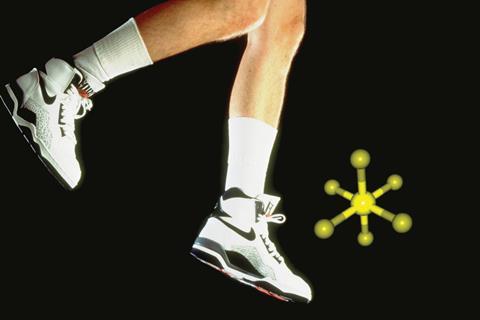 Sulfur hexafluoride has been used in all sorts of consumer goods, but due to its incredibly high global-warming potential, manufacturers are looking for ways to kick it out of their products

The molecule, basically a sulfur atom surrounded by six fluorine atoms, was first made in a French laboratory at Paris’ prestigious Ecole de Pharmacie, in around 1900. Nobel prize-winner, Henri Moissan, learned his trade at the school after leaving first a clockmaker’s job and then the army. He spent a couple of years attempting to isolate fluorine itself, finally succeeding in 1886 by electrolysis of hydrofluoric acid. Then, he moved onto creating new compounds of fluorine, teaming up with trainee pharmacist Paul Lebeau to make ‘hexafluorure de soufre’ – SF6. According to a commemorative article published a century later, it was made by burning sulfur in fluorine and was one of the most interesting compounds he produced ‘because of its composition and chemical inertness’ – the fact that it didn’t react with anything.

Unwittingly, Moissan had made a monster. Coupled with its ability to absorb infrared radiation, the inertness that early 20th century scientists found so interesting is exactly what makes SF6 so dangerous as a greenhouse gas. Because it doesn’t react, it doesn’t break down, so it hangs around in the atmosphere soaking up the infrared rays in sunlight. It does this for anything up to three millennia, meaning the SF6 made over 130 years ago by Moissan might still exist in the year 4886. By contrast, most of the CO2 emissions from burning coal at that time will have dissolved in the ocean by the end of this century.

None of this would be a problem if, after Moissan’s experiments, nobody had made any more SF6. After all, it doesn’t occur naturally. But SF6 is a great electrical insulator. In the 1930s, people started using it to insulate high voltage electrical equipment, helping to prevent electrical fires. All this was before anyone had heard of climate change.

Much later, Veerabhadran Ramanathan at Boulder’s National Center for Atmospheric Research in Colorado raised the possibility of SF6 being one of many trace gases – gases that exist only in tiny amounts in the atmosphere – that could contribute to climate change. In a 1985 paper, he mentioned it but didn’t at the time assess its warming potential.

These tiny amounts have been growing since SF6 began to be used increasingly for gas-insulation of electrical equipment, including circuit breakers (switches that stop current flowing) and power lines. Even in the last few decades, when wind turbines and solar technologies were connected to the grid, the companies installing them also used SF6. Over a sector as large as the electric power industry, leaks from these devices add up, and SF6’s long life means they build up too.

It turns out SF6 has a far higher global warming potential (GWP) than most better-known greenhouse gases. GWP is a combination of a molecule’s lifespan in the atmosphere, and how much infrared radiation it absorbs, at which particular wavelengths. Over a 100-year period, SF6 is estimated to cause around 23,500 times the warming of CO­­2, according to the most recent Intergovernmental Panel on Climate Change report.

In 2000, Nike had to extend its deadline for phasing out SF6 in its Air shoes due to difficulty finding a replacement. Six years later, it finally switched SF6 for nitrogen. The electrical industry is still searching for a replacement. One possible alternative is dry air. While the search continues, EU emissions are rising, reaching the equivalent of 7 million tonnes of CO2 in 2017 – comparable to the emissions of more than a million cars.