A chemical so explosive, no one should ever go near it – except to recover nuclear fuel

Some compounds are so unpleasant it would be better if they had names like ‘reconsideric acid’ or ‘notworthite’. One such compound is dioxygen difluoride, generally referred to as FOOF. It is nicknamed after its chemical structure, F-O-O-F, but it handily doubles as an onomatopoeia for what happens whenever it comes into contact with … well, just about anything. 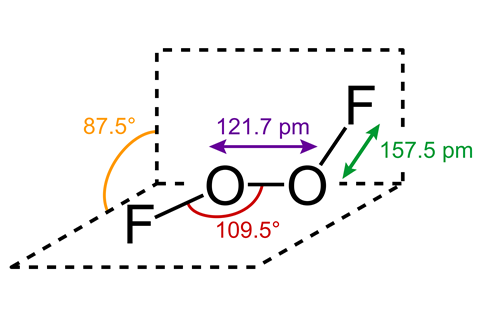 First synthesised in Germany in the 1930s by inorganic chemists Otto Ruff and Walter Menzel, FOOF belongs to the oxygen fluorides, a highly dangerous class of oxidants. Just the process of making it – for example by mixing O2 and F2 at 700 °C before immediate cooling by cryogenic liquid oxygen as one paper suggests – should be enough for most sensible people to suggest alternatives.

And once you have FOOF, it’s a pain to work with. It melts at -163 °C and begins to decompose into its constituent elements if the temperature rises by only a few degrees. Naturally, that hasn’t stopped a handful of chemists from experimenting with it.

Most famous is the work of Alex G Streng, one part of a dynamic husband-and-wife duo, who dedicated the bulk of their careers to the adventurous pursuit of fluoride compounds. While his wife, Lucia V Streng, spent her time on krypton and xenon fluorides, he was more drawn to oxygen fluoride. In a remarkable paper from 1963, he tested the chemical properties of FOOF, including its reactivity. And reactive it was. 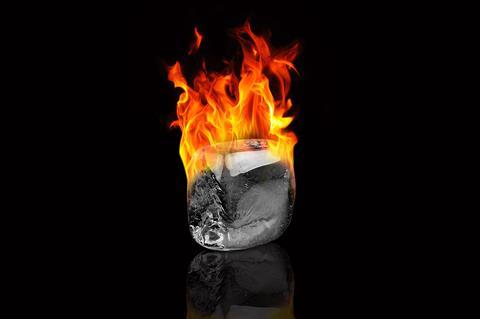 FOOF reacts explosively with almost anything it comes into contact with

Experiment after experiment ended violently. Ice? Explosion. Chlorine? Explosion. Organic compounds? Flames and an explosion. You get the picture. Bear in mind, most of these experiments were performed around -140 °C. Though Streng was able to glean some information about elusive intermediates – mostly interhalogen species with pretty colours – it hardly seems worth it. As Streng said himself, of the reaction of FOOF with sulfur tetrafluoride in perchloryl fluoride, ‘explosions could be avoided in some cases (at temperatures below 166 K) but the yield and stability of the intermediate product were very low.’

Not that that deterred him much. In the explanatory notes at the end of the paper, he expressed his hope that, if only the reactions were carried out at even lower temperatures and over longer periods of time, he would get better results.

It is not clear what drove Streng to this daredevil line of work. Maybe it was just pure, scientific curiosity; maybe he hoped it would turn out to be useful for something – anything – later on. In the 1950s during the space race, there had been significant interest in oxygen fluoride compounds because of their potential as oxidisers in rocket fuel. However, as discussed in a later review by Streng himself, this was generally limited to oxygen difluoride, OF2. For a long time, it looked as though FOOF would go on to have no practical use beyond endangering the lives of scientists.

But Streng’s sacrifice of time and safety was not completely wasted. In the 1970s and 80s, inorganic chemist Larned B Asprey turned his attention to fluorine chemistry. During the Second World War, he had worked on the Manhattan Project, so he knew a lot about nuclear chemistry already. Asprey discovered that FOOF could recover elements like plutonium and uranium from nuclear fuel waste, in which the radioactive elements exist as oxides. FOOF does this by transforming them to hexafluorides at room temperature. The hexafluorides can then be fed back into the nuclear fuel cycle. ‘No other chemical,’ he writes in 1984, using italics for emphasis, ‘is capable of PuF6 generation at temperatures even approaching the low temperatures used here.’ He even patented the method that same year, highlighting how with this superior approach there is virtually no damage to the containment vessels – no doubt a rare and impressive selling point.

Asprey cites Streng’s review and praises him for his careful work because without it, Asprey would have been starting from scratch. Streng’s work, which at best seemed eccentric and at worst the project of a pyromaniac, found a purpose years later in an unforeseen context. It’s a welcome reminder to put trust in fundamental science and to laud the scientists that put themselves on the line – we never know where it might lead.