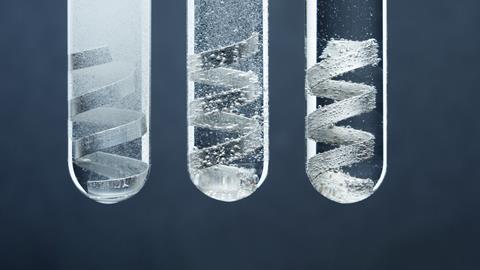 It eats through metal and skin, but this laboratory staple is essential in your stomach

A couple of years ago, the port of Hull, UK, found itself under a cloud of hydrochloric acid. The vapour started leaking from a crack in a storage tank belonging to a treacle trader. No one was hurt, but several people reported feeling unwell. Firefighters worked through the night to contain the cloud with water mist. 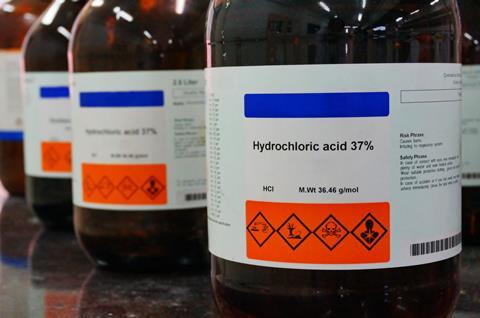 Hydrochloric acid is used in the refining process that turns sugar into treacle – that’s probably why the treacle traders had 500 tonnes of it. But it’s not the sort of chemical you want to meet outside of a sealed container. The vapour it gives off poses a serious health hazard if breathed in. In the 1990s, a truck spilled 800 litres of hydrochloric acid near to homes in Louisiana, causing residents to complain of burning eyes and throats, and flu-like symptoms. Two years later, they were still suffering lasting effects.

Hydrogen chloride vapour can also get into the air when plastic is burned, or after volcanic eruptions. When Mount Pinatubo in the Philippines erupted in 1991, it released a lot of hydrogen chloride. If it hadn’t been for the tropical storm that swept through immediately afterwards, it’s thought that the hydrogen chloride could have made it to the stratosphere and dissolved part of the ozone layer.

Why is hydrochloric acid so dangerous? Because it’s a strong acid. Acids are termed weak or strong based on how readily they ‘donate’ their hydrogen atoms. Hydrochloric acid is formed when hydrogen chloride dissolves in water. In this situation, hydrogen chloride, a simple molecule made up of one positively charged hydrogen attached to one negatively charged chlorine, takes little persuading to pull itself apart. Thus, all of its hydrogen is readily ‘donated’. 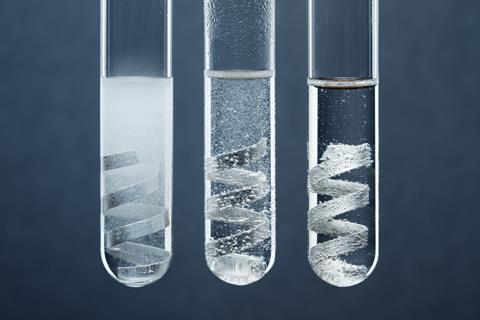 When a strip of magnesium is placed in hydrochloric acid, hydrogen gas is released. The reaction proceeds at a higher rate when more concentrated acid is used

Hydrochloric acid is so strong that it can eat through metal, something you can witness first hand in the school chemistry lab. Most science students will, at some point, take a strip of magnesium and dunk it into a flask of hydrochloric acid. You can see the reaction taking place – bubbles of hydrogen stream off the surface of the metal, while chlorine pairs with the magnesium to become magnesium chloride. With concentrated hydrochloric acid, there’s a vigorous reaction, but dilute solutions are safer for these experiments. Something that eats through metal will also eat through skin.

That’s why we don’t keep hydrochloric acid in our kitchens, or sprinkle it on our chips like ethanoic acid (vinegar), which is much weaker. Strangely enough, though, we do keep it in our stomachs. Hydrochloric acid is the acidic part of gastric acid, the chemical that our stomachs make to help us digest our food.

Gastric acid is produced in cells called parietal cells found in the lining of our stomachs. The process of making it starts with carbon dioxide (CO2)­ that we’ve breathed in and is circulating in our bloodstream. In parietal cells, this CO2 is constantly being converted into carbonic acid (H2CO­3) in a reaction with water. To get the hydrogen for making hydrochloric acid, one positively charged hydrogen ion is ripped off each carbonic acid molecule. Parietal cells are chock-full of hydrogen – concentrations are millions of times higher than in nearby blood vessels. To get the chlorine part, something a bit tricky happens. The cell swaps the leftover negatively charged bicarbonate (HCO3) from carbonic acid for a negatively charged chlorine from the bloodstream. Finally H+ and Cl- are pumped into the stomach where they form hydrochloric acid at around pH 1.

But if hydrochloric acid is strong enough to eat through metal and skin, why doesn’t it eat right through your stomach lining? It’s a good question. The answer is that the stomach is protected by a layer of sticky mucus, which acts as a barrier between stomach acid in the stomach and the cells lining it. Stomach ulcers are an example of the damage that occurs when things gets out of balance and the parietal cells dump too much acid into the stomach.

On the other hand, not producing enough hydrochloric acid can lead to nutrient deficiencies including anaemia (lack of iron) due to being unable to digest your food properly. So while you don’t want to breathe in the fumes, or dip your fingers in it, you do want it swilling around in your stomach – just not too much.

Hayley Bennett is a science writer based in the UK