Tips for teaching maths skills to our future chemists, by Paul Yates of Keele University. In this issue: displaying data

Information is redundant if not shared, so being able to communicate numerical data is important. Additionally students need to be able to express their experimental data in an appropriate way for assessment purposes, and so they must be able to organise data in a meaningful way.1 Generally, data are displayed using tabular or graphical techniques, or both.

What difficulties do students have?

I find that students are better at interpreting, rather than constructing, graphs.2 Many are reluctant to tabulate data, preferring lengthy repetitive text which is occasionally punctuated by the quantities they want to report. When it comes to drawing graphs, some students have problems choosing the right scale and the origin, and units pose problems whether they are displaying their data in a table or on a graph.

How is this best taught?

A table may be the final form in which data are published, or it may be a preliminary stage in the construction of a graph.3  A table has the advantage that a required number of significant figures may be quoted, whereas in a graph this is limited by the size of the graph and the range of the data. On the other hand, data in a graph can be interpolated and extrapolated rapidly, if accuracy is not an immediate requirement. Trends can be detected in graphs that would be unlikely to be detected if the data were given in tabular form only.4

Units in graphs and tables

Most physical chemists agree that the figures in the body of a table, or plotted on a graph, should be pure numbers, and that the units need to be stated on table headings or axis labels. This approach also has the advantage that we can unambiguously include powers of 10. In the worked example we have a table heading of [NH3]/10-7  mol dm-3, and the third entry in this column is 5.84. If we equate these we have

and multiplying both sides by 10-7 mol dm-3 gives

A similar argument applies when reading data from graphs. Alternatively, you could use the column heading [NH3](× 10-7 mol dm-3).4 The question immediately arises as to whether the numbers in the table have been multiplied by 10-7, or need to be multiplied by 10-7. The previous approach, I believe, removes this ambiguity.

Reference 5 contains some useful guidelines for presenting data in tables. For example:

Further suggestions include rounding all figures to two significant figures and including row and column averages.5 However, it may not be wise to share this advice with students as general rules because they might be tempted to apply them without exception. Figures to be compared need to be close, while at the same time incorporating gaps to guide the eye across the table. This applies to tables with large amounts of data, so might be useful for extended student projects.

Plotting data as the experiment proceeds can identify spurious measurements

References 1 and 6 give some useful advice for presenting data on graphs, including:

Opinion is divided on whether graphs should be plotted as an experiment proceeds, or after the experimental work has been done. The advantage of the former is that any unusual points can immediately be investigated, whereas in the latter the experimenter will know the range of the values to be plotted. A compromise is to plot the graph at the end of the experiment, but keep the apparatus available to allow any dubious measurements to be repeated.

There are certain pitfalls when graphs are generated automatically using a computer. When judging the appearance of the final graph the considerations already outlined still apply, and appropriate user intervention may be required to achieve this. In particular, axis labels, including units with subscripts, superscripts, or Greek letters may need to be generated by a word processor with 'cut and paste' used as appropriate.

These data7 relate to the thermal decomposition of ammonia at 2000 K:

This was produced using the program Microsoft Excel. The range of values on the y -axis starts at 5.0 (rather than zero) and all numbers on the axis are given to one decimal place. Axis labels and the title were added using text boxes in Microsoft Word and pasting from the table. (Note that the symbols recommended in the main text are not available, but choosing a suitable size for the symbol does make them sufficiently visible.) 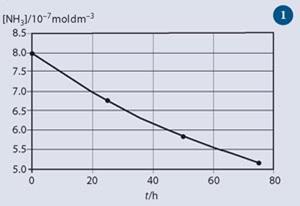