Teach pupils how to handle significant figures, decimal places and uncertainty in measurements 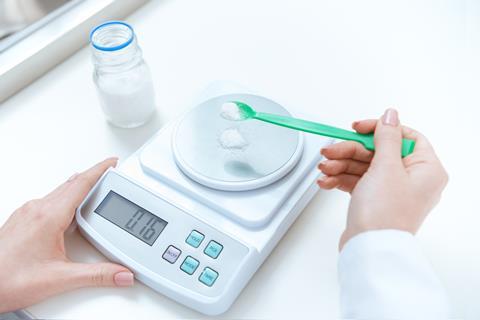 The way we express the result of a measurement or calculation conveys important information about our estimation of its accuracy. The underlying mathematics involves the concept of place value which is introduced early in primary school. All students will have covered rounding to the nearest whole number or to one, two or three decimal places (d.p.) by the age of 14. Using a number line helps students visualise and make sense of rounding. This approach may be needed for a few students in secondary. Less confident students tend to be more confident with whole numbers than decimals and it’s best to start with questions using rounding to whole numbers or tens before moving on to one decimal place and then two or three decimal places. 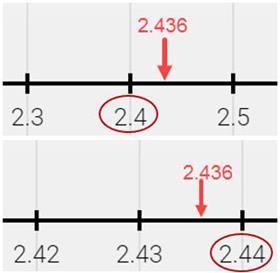 Students can move on from number lines to the following approach: underline the numbers to be kept, and then look at the digit after the last one to be kept and round up if it is 5 or more, otherwise round down.

Questions 1 and 2 in the resource (download below) are useful as a starter to remind students of what they have learned in maths and ensure they are secure with rounding before going on to significant figures.

A worksheet to provide extra support for students as MS Word or pdf, starting with number lines and gradually increasing the level of demand with choosing between options and filling in blanks (inspired by the blog of Don Steward and Jo Morgan’s resource), with the answers as MS Word or pdf.

A worksheet to provide extra support for students, starting with number lines and gradually increasing the level of demand with choosing between options and filling in blanks from the Education in Chemistry website: LINK

Rules to work out the number of significant figures

Take the example of the measurement of 5 cm to the nearest whole centimetre as shown in the upper ruler in the picture below. The actual measurement could have been anywhere between the lower bound of 4.5 and the upper bound of 5.5. In maths this would be written: 4.5 ≤ x < 5.5, since 4.5 would be rounded up to 5 and so is included in the error interval. However, 5.5 is not included in the error interval as it would be rounded up to 6 (it is also appropriate to use 5.49 or 5.49 recurring instead of 5.5). For the lower ruler where the intervals are marked in millimetres, the measurement is much more accurate and the error interval is smaller, 4.95 ≤ x < 5.05. 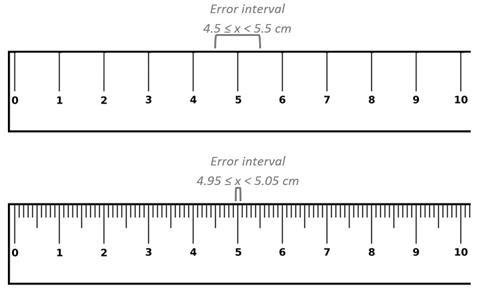 Calculations using significant figures are where the maths and science approaches diverge the most. In maths, the calculation is performed using the lower bound of each measurement, then repeated using the upper bound of each measurement. The digits that are the same for the upper and lower bounds are reported. As a scientist, I find the GCSE maths approach distinctly odd and I reproduce the advice from Edexcel’s Guide to maths for scientists below:

If there are several steps in a calculation, it’s important students use the full calculator display for any intermediate answers then report the final answer to the appropriate number of significant figures. If intermediate answers are rounded, then their final result may be incorrect due to rounding errors. Explain this distinction between the conventions in maths and science to your students so they are clear about the difference in approach.

b) 0.003 (to three decimal places with incorrect rounding)

What is considered an acceptable answer in maths and science can be different. If I measured 125.00 g of salt, rather than 125 g, a scientist would implicitly understand that I had used an accurate balance. In maths, students are told to consider whether their answers are practical, and they might assume that 125.00 is not practical.