Study calls for universities to require A-level maths for chemistry 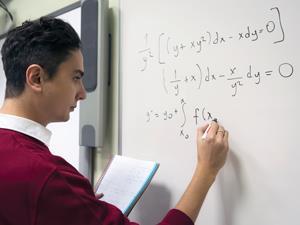 Cambridge Assessment has called for more universities to consider making A-level maths a requirement for a chemistry degree.

Chemistry relies heavily on mathematical principles, but only a small number of UK universities require A-level maths to study undergraduate chemistry courses. Investigating the link between maths and chemistry, researchers at Cambridge Assessment surveyed 332 chemistry undergraduates. 41% of the students had studied A-level further maths before starting their degrees.

Most of the students (92%) were glad they studied further maths, and found it useful for their chemistry undergraduate studies, particularly the units on mechanics and statistics. Moreover, 89% found the further maths course difficult and challenging, but almost all enjoyed it.

Before starting university only 30% of the students thought they would need their maths qualifications in their career. Paul Yates, author of Chemical calculations: mathematics for chemistry, says, ‘the fact that chemistry relies on mathematical principles is not being taught to A-level chemistry students.’ According to Paul, both secondary schools and universities may share the blame: ‘I’ve heard that teachers in A-level chemistry don’t emphasise the mathematical side of the subject, but there’s also reluctance in some universities to put that message out, as it may frighten students.’

Ellie Darlington, one of the study’s authors, suggests that ‘if universities required A-level maths, secondary school students would perceive maths as useful for a chemistry degree.’

Ellie remains positive about recent changes to maths A-levels: ‘after the new reforms, A-level mathematics will have compulsory units on mechanics and statistics. As a result, students may be better prepared to deal with physical sciences degrees.’

The study is part of a much larger project involving over 4000 undergraduate students and 30 lecturers in different subjects looking to find out if students are prepared for the mathematical demands of their degrees. The results of this survey are being published in several papers that are available from the Cambridge Assessment website.

Update: Lots of you wanted to comment on this story. We've published a round-up of the discussion, together with responses from Cambridge Assessment