1339 children in largest science lesson ever 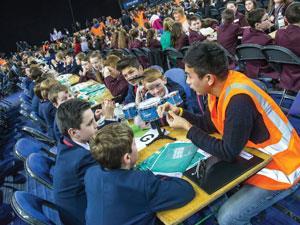 The Royal Society of Chemistry (RSC), the British Council and organisers at the Northern Ireland Science Festival are celebrating after successfully setting a new Guinness World Record for the largest practical science lesson.

Primary and secondary school children from schools across Northern Ireland gathered at the Odyssey Arena in Belfast to take part in a massive enquiry-based lesson and tried their hand at solving a ‘crime’ using science.

According to official Guinness World Records adjudicator Pravin Patel the new record broke the previous benchmark by over 350 students, with 1339 children participating.

Stephanie Nelson, the RSC education coordinator for Ireland, said, ‘We are extremely proud of all the children who took part in setting this new world record. Our thanks must go to all the teachers, classroom assistants and volunteers who supported the event and made it a huge success. To have many hundreds of children enthused and excited by the world of chemistry is an immense joy!’

Northern Ireland Science Festival director Chris McCreery said, ‘We are immensely proud to be associated with this amazing landmark feat. This achievement would not have been possible without the tremendous work of the RSC, the British Council and the educational sector.

‘It’s extremely rewarding to see so many children inspired by and talking about the importance of science.’

The record breaking event was run as part of the inaugural Northern Ireland Science Festival, an 11-day festival, taking place from 19 February to 1 March. The aim of the festival is to celebrate the region’s rich scientific heritage and to engage the next generation of scientists and technology professionals.