All that corrodes is not just iron

The widespread use of iron and steel means that the tell-tale signs of rust are all around us. Rusting springs to mind when we think of corrosion. But corrosion comes from the Latin corrodere meaning to gnaw away, and thus is a general term used when any material reacts with its environment and is damaged.

Rust is the name given to the red oxidation product of iron, hydrated iron(III) oxide. The term rust is also used for a fungal disease of plants, shown by the appearance of red patches on leaves, though this is not corrosion. 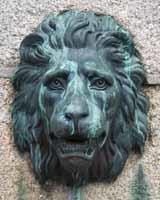 Other metals besides iron can corrode, as can plastics. Copper exposed to the weather corrodes slowly and becomes covered with a thin green layer, a mixture of copper(II) compounds. From its colour this is known as verdigris, a corruption of Old French term vert de Grece, the green of Greece. The name is given to various blue-green pigments containing copper(II) compounds, for example basic sulfate, ethanoate etc.

Silver tarnishes when exposed to sulfur compounds because a layer of black, insoluble silver sulfide is formed on the surface and the shiny silver dulls. Tarnish comes from old French ternire, meaning to dull or deaden. Another name for this surface coating of a corrosion product is patina, derived from the Greek patene meaning platter, coming into Latin (patina) and French (patene).

Metals such as gold and platinum do not corrode visibly because they are unaffected by oxygen and most acids, and are more stable than many of their compounds, such as oxides or sulfides. This lack of chemical reactivity led to them being called noble metals. The metals that corrode rapidly are those high up the electrochemical series (ie having negative electrode potentials, eg sodium), which are less stable than their compounds and so react readily with their environment.

Just as we have developed controlled corrosion processes to form a layer of oxide on the surface of metals, eg the thickening of the protective oxide layer on aluminium by anodising, so we can also sulfurise (or sulfide) a metal (forming a sulfide layer), nitride it (forming a nitride layer), or carbonise it (forming a carbide layer). Chemically these are all examples of corrosion where chemical attack at the metal surface results in a thin layer of adherent corrosion product on the surface, which protects the rest of the metal against further chemical attack.