The previous trail1 looked at compounds of iron. But a brief excursion can also introduce some of iron's interesting redox and historical chemistry.

Surely, your walk will take you past some concrete. This is made from cement2 which, perhaps surprisingly, may contain traces of chromium(VI) compounds (chromates). Contact with skin can result in dermatitis. Since January 2005 it has been illegal to sell cement containing more than 0.0002 per cent by weight of chromium(VI). To prevent this, iron(II) sulphate is used to reduce chromium(VI) to harmless chromium(III):

Iron(II) sulphate has many other uses and has long been an important industrial chemical. The compound has been made in Britain since ca 1570. Confusingly, it was known as copperas or, better, as green copperas (to distinguish it from blue and white copperas, ie copper(II) sulphate and zinc sulphate respectively). At the time the chemistry and composition of these related compounds was not well understood. Historically, copperas was used as a mordant for wool (ie to help the dyeing process), in black ink, and in tanning leather. The compound was also used in various patent medicines and the Royal Navy even tried it as a cure for scurvy. Today, iron tablets, typically containing 200mg FeSO4, are sold in most pharmacies as a cure for anaemia.

Copperas, fool's gold and castles made of sand 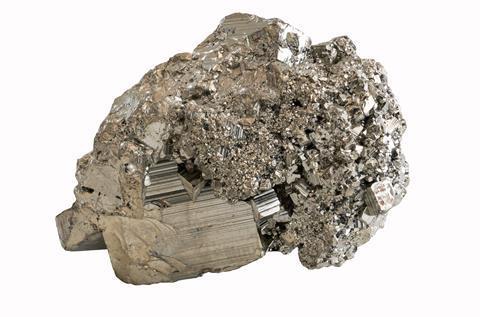 The original starting material for making iron(II) sulphate was copperas stones, iron pyrites (fool's gold) found on the sea shore, especially around the south-east coast of England where nodules were washed out of the London clay. Remains of the industry near Whitstable in Kent have recently been the subject of an archaeological investigation3 but other remains can be found in the form of place and street names, eg Copperas Bay (Essex), Copperas Wood (Suffolk) and many others (watch out for corruptions such as Copper House). Very slow atmospheric oxidation (over a period of years) of iron pyrites yields iron(II) sulphate and sulphuric acid:

The solution was then boiled with scrap iron to convert the acid into more iron(II) sulphate, which crystallises out of the saturated solution:

The iron pyrites, from which copperas was made, probably originated from the reaction of hydrogen sulphide with iron compounds in sand, forming initially black iron sulphide:4

The hydrogen sulphide, in turn, comes via the action of sulphur-loving bacteria on organic material in the sea. Black sand, smelly because of the hydrogen sulphide given off, will be familiar to many who have built sandcastles - once exposed the black colour soon fades as air oxidises the iron sulphide back to the 'proper' colour of sand, ie iron(III).

From mines to supermarkets

The reaction by which iron(II) sulphate is made from copperas stones is similar to a reaction which occurs naturally when iron pyrites is exposed to water, for example in abandoned mine workings.5,6 The presence of limestone will partially neutralise the acidity, producing basic, coloured precipitates. Streams running off such sites are often stained orange by Fe(OH)3.n H2O or yellow by FeO(OH) or KFe3(SO4)2(OH)6.

This trail ends in the supermarket. To supplement people's iron intake in their diet food manufacturers add metallic iron to some foods, eg breakfast cereals. One brand of cereal lists 7mg iron in a typical portion. This will react with hydrochloric acid in the stomach: