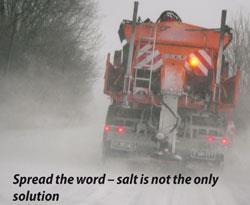 Trucks spreading salt - and sand or grit to increase friction - were a common sight in the UK this winter. To lower the freezing point of water, salt is spread at a concentration of 10-15 g m-2 on a dry road, but on wet roads, or those covered with snow, the concentration is more typically 20-40 g m-2. So why salt and are there alternatives?

A solution freezes at a lower temperature than the pure solvent, the actual temperature being dependent upon the amount of solute. The cryoscopic constant of water is 1.86 K mol-1 kg-1, ie one mole of any substance dissolved in 1 kg of water will lower the freezing point by 1.86°C. Strictly speaking this is only true for dilute solutions but, as an approximation one mole of urea, CO(NH2)2, 60 g, in one kg of water will depress the freezing point of water by 1.86°C.

However, almost the same mass (58.5 g) of sodium chloride, NaCl, gives almost double the drop in freezing point because 58.5 g gives two moles of ions, one each of Na+ and Cl-. Compounds that contain even more ions per mole, eg CaCl2 or Na2SO4, would produce a bigger effect but you would have to use a greater mass of these compounds to obtain one mole of each of them - 111 g for the former and 142 g for the latter.

Back on the road

A road surface covered with a 10 per cent (w/w) solution of sodium chloride would not freeze until the temperature reached -6°C but to be effective the salt must dissolve. This is fine if the road is wet - the salt will make it much harder to freeze - but supposing the surface has already frozen? Often there is a little surface water on ice and sodium chloride is hygroscopic - it absorbs water from the atmosphere. Calcium chloride is so hygroscopic it forms a solution with the water it absorbs (it is deliquescent). As a result, calcium chloride is more quick-acting and quite often used in the US, sometimes in a mixture of three parts NaCl to one part CaCl2. However, calcium chloride is ineffective in very cold conditions because there is not enough surface water to dissolve the salt. In such circumstances, in the US, magnesium chloride is often used.

Another important consideration when spreading salt on the road is particle size. Small grains of salt will have a large surface area and dissolve quickly, but may be blown away by the wind or moving vehicles. To counteract this, some local authorities in the UK have been experimenting by adding molasses to the salt. Assuming molasses is impure sucrose, C12H22O11, a 10 per cent (w/w) solution will have a negligible effect on the freezing point but the theory is that the many -OH groups will hydrogen bond to the water on the salt or road surfaces and prevent the salt blowing away.

Salt on roads, however, brings its own problems. For example, chloride ions corrode vehicles and bridges. In the US this is avoided by using both urea and a double salt, calcium magnesium ethanoate (acetate), Ca3 - 4Mg7-6(CH3CO2)20. The relative molar mass is 1478, but there are 30 moles of ions per mole of compound, so a 10 per cent (w/w) solution would freeze at -4°C, whereas a 10 per cent (w/w) solution of urea alone would freeze at about -3°C.

To investigate salt and its alternatives, place funnels over the top of two measuring cylinders. Fill each funnel with pieces of ice. Add salt to one of the funnels. The measuring cylinder below the salted ice fills up much more quickly than the other. You can also place thermometers (or temperature probes) into the ice and the water collected and investigate the effects of changing the amount of salt used or of alternative solutes, such as ionic calcium chloride or sodium sulfate and molecular sugar or urea.