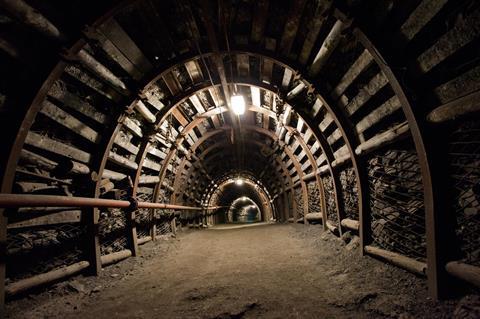 While not everybody has a coal mine at the end of the road, there are many disused mines around the UK, and a recent visit to the Big Pit (Pwll Mawr) at Blaenafon, part of the World Heritage Site, confirmed just how much chemistry there is here.

I immediately noticed that water running down the side of the underground roadways was red-orange with iron oxide. This is not surprising given that the nearby ironworks, also part of the World Heritage Site, was set up in the late 18th century to exploit the local mineral resources - coal, limestone and iron ore.

Coal is largely a mixture of complex hydrocarbons. Miners have always feared 'fire damp' (methane), which is trapped in coal and released as the coal is broken up and mined. The word 'damp' comes from the German dampf, meaning vapour or steam. Mixtures with air are explosive with between five and 15 per cent methane. Thus explosions were common when candles were the source of light in the mines.

The Davy lamp partly solved the problem, in that the flame was surrounded by a metal gauze (of critical dimensions) which conducts the heat away, so that the auto-ignition temperature (537°C) is not reached. However, not much light gets through the gauze and some designs had a double layer.

Later developments, which came about because Davy did not patent his invention, protected the flame by a cylindrical glass screen. In these designs, air came in through the top of the lamp, where there was a metal gauze. Not only did it provide a much improved light source but also the presence of methane altered the size and shape of the flame. This provided a good way of estimating the percentage of methane (and other gases) in the atmosphere and thus the action needed.

Since coal is no longer mined at the Big Pit, methane is no longer a problem - tourists can visit safely. However, other problems remain.

'Black damp', a mixture of carbon dioxide and nitrogen, accumulates in old underground roadways, which may be poorly ventilated. I was interested to note that in the lamp room guides had chalked up readings of the atmospheric pressure.

The day before our visit there had been a bit of a problem. A depression was centred on the British Isles, the atmospheric pressure had dropped and, as a former miner explained, Boyle's law meant that the volume (of black damp) had increased. How did they deal with it? By switching on a second ventilation fan.

Another potential problem in the mine is 'white damp' (or 'after damp') - ie carbon monoxide. This gas is very toxic because it combines irreversibly with haemoglobin. In addition to a battery pack we each carried a carbon monoxide aspirator containing hopcalite. This is a mixture of about three parts manganese(iv) oxide and one part copper(ii) oxide, and catalyses the oxidation of carbon monoxide to carbon dioxide, using atmospheric oxygen at ambient temperatures.

Our miner-guide said that these aspirators were only introduced into UK mines in about 1969 and he had needed to wear one only once.

'Stink damp' - hydrogen sulfide - is also very toxic, but much less of a problem, partly because it is so easily detected. The human nose can usually sense ca 0.01 ppm of H2S, about one thousandth of the short-term workplace exposure limit.

Beyond the pit head

Beyond the pit head, at some distance from other buildings, is the explosive store. Mostly, these were based on nitroglycerine (propane-1,2,3-triyl-trinitrate) though in a less violent formulation than in gelignite.