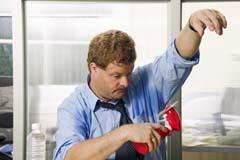 Hyperhidrosis - he sure needs to cool down

If you suffered from hyperhidrosis it would mean that you perspired excessively and your problem was too much sweating. The hyper- prefix means much or greater, and hidrosis is the technical name for sweat, which derives from the Greek for sweat hidros. Perspiration comes from the Latin perspirare meaning to breathe through, which is from spirare meaning to breathe (as in expire and inspire). So the sweat breathes through your skin. If excessive perspiration is your problem, you need an antiperspirant to stop you sweating. Antiperspirant products contain chemicals (eg aluminium salts) that block the pores on the surface of your skin, and a deodorant to kill odour-causing bacteria on the skin surface and to mask the smells they produce.

The -osis ending is very common and means either a process (as in metamorphosis) or the formation of something (eg hidrosis, fibrosis etc) or describes a medical condition where something is formed, such as tuberculosis. There are many examples.

Psychosis is a severe mental disorder, the production of a disturbed soul, and the prefix pyscho- comes from the Greek for soul, psukhe. A similar but milder mental disturbance is neurosis, which was originally ascribed to 'bad nerves' - the Greek word neuron means nerve. Being nervous often makes you sweat, so neurosis might in turn induce hidrosis.