When particles floc together 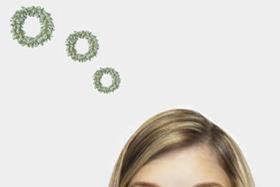 I wonder what floc means?

We are all familiar with the phrase 'birds of a feather flock together', meaning that those of similar tastes congregate in groups. Flock has two meanings, however. One applies to a group of animals or birds or people, and the other to tufts of wool, eg as in flock wallpaper. The latter use comes from the Latin floccus, which means a tuft of wool, and flocculus means a little tuft.

We now use floc to mean the rather fuzzy particles produced when a solute comes out of solution and clumps together. The process is called flocculation.

Flocculation is related to a more common process - precipitation. One of the most arresting reactions in chemistry is the formation of a precipitate. Two clear solutions are mixed and a solid suddenly appears in the solution; white for silver(I) chloride, yellow for lead(II) iodide, blue for copper(III) hydroxide.

Sometimes in chemistry precipitation is obvious and the solid literally seems to fall out of solution and settles at the bottom of the vessel. In other cases the solution just becomes cloudy or opaque because fine particles become suspended in the solution. Often these particles are colloidal in nature, with sizes ranging between those of molecules and larger particles. Brownian motion caused by molecular collisions with the solvent molecules keeps these particles in suspension.

Apart from size, another reason why colloidal particles might not collect together is because they are charged, and having the same charge they repel each other. Water is often contaminated with charged colloidal particles, which affect its colour and taste. Flocculating agents, such as aluminium and iron(III) salts or polyelectrolytes, neutralise the charges on the particles so that they clump together to form a floc. The floc settles in the water and can be filtered off, removing with it the taste and colour.

Some colloidal particles are so fine that they are almost invisible but show up as a cloudy track when a thin beam of light is passed through the suspension. This is the Tyndall effect, named after the Irish scientist John Tyndall (1820-93). The small dispersed particles scatter the beam of light in all directions. The same effect means smoke particles can be used to make a laser beam visible.