A day in the life of a research scientist: Duncan Smith

Duncan Smith has spent the past nine months working for Ilika Technologies as a research scientist. He talks to Kathryn Roberts about his typical day 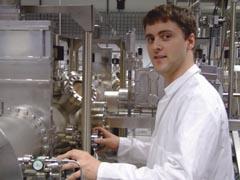 Ilika Technologies is a small spin-out company from the department of chemistry at the University of Southampton. The company uses high throughput technology to develop new materials for hydrogen-storage, piezeoelectrics, fuel cell catalysts, and for biomedical applications. Working in a small team of three research scientists, Duncan investigates materials for hydrogen storage, and shares the responsibility with his colleagues to make sure their projects stay on target and on budget.

Like all researchers Duncan spends a lot of time studying the relevant academic research journals. He looks for materials that have the potential to store a lot of hydrogen but can release it at just above room temperature. With a host of compounds to choose from - mixed metal hydrides, aluminium hydrides etc  - he needs first to decide on a target. He will synthesise the target, check out its H2-storage properties, and then tweak its composition to try to improve on these.

Duncan identifies magnesium hydride as a good H2 -storage material but it has the disadvantage that it releases H2 only at high temperature. So he decides to introduce a nickel catalyst into the system to bring down the temperature at which the H2 is released.

At the start of the day he heats the elements he is going to use make his material to remove any absorbed gases, such as nitrogen and oxygen. The two metals are stored in the deposition chamber inside the ultra high vacuum equipment. Magnesium is heated in a crucible connected electrically; nickel is heated in a separate crucible using an electron beam evaporator, which produces a beam of excited electrons. No contaminants must enter this equipment.

Duncan then takes a blank array (a silicon wafer, for example), which is divided into 49 squares (1 × 1 mm), each of which has its own heater, which can be controlled from outside the equipment. He puts the substrate into the deposition chamber via a load lock. Using mechanical manipulators, he positions the substrate in the deposition chamber, and places a shutter between each source and the substrate. This allows him to synthesise up to 49 different materials - thin films typically 100 nm thick - with a range of Mg-H-Ni compositions, all before lunch. If the samples are to be taken out of the chamber to make measurements on them, he will 'cap' them with an inert material such as gold or silicon dioxide.

Typically Duncan uses X-ray diffraction to determine the structures of his materials to find out if he has made anything new, and checks the purity and composition using energy dispersive spectroscopy, which can identify specific atoms. He then checks his samples for their H2-storing properties by moving them into a very high vacuum chamber. Because each square is heated individually, Duncan can measures the H2-storage properties for each composition.

Back at his desk Duncan analyses his data and writes a report on his work. At the end of the project he will make a formal presentation of his results to the client. Ilika clients are often large companies that need to find out whether particular materials are worth pursuing.

Duncan is particularly pleased that he has been able to use the knowledge that he gained as a PhD student in his job. No one day is the same and he thrives on solving new problems that inevitably arise when dealing with technology that no one else in the world has got and which can involve doing 100 experiments at one time. He is always looking to develop the technology to keep ahead of the game.

'This article was originally published in The Mole