Researchers in the US have developed short-lifetime batteries that can be completely absorbed by either the body or the natural environment once they are no longer needed. This battery design could potentially be used for applications such as powering temporary cardiac pacemakers and wireless environmental monitoring devices.

Earlier work on similar technology had been limited by low voltage outputs or low energy densities, making them useful only for low-power systems like LEDs or simple calculators. 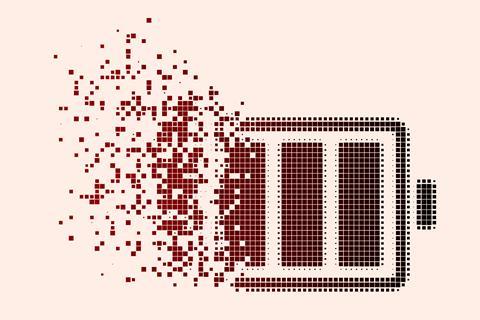 The team chose known biodegradable electrodes for the battery: magnesium foil for the anode and an iodine-based cathode. Water and body fluids dissolve both materials completely, which allows them to be absorbed naturally.

The first prototype had a traditional battery design with all the components contained within a single vessel and it performed poorly, like its predecessors.

The researchers then completely redesigned their battery architecture, to isolate the anode from the cathode by positioning it outside the main battery pouch. They also used a benign dual electrolyte containing both an ionic liquid and aqueous solution. ‘With this kind of a set-up we were able to get a much higher capacity,’ explains Amay Bandodkar at North Carolina State University who co-led this work.

The batteries were tested in mice, as batteries powering temporary heart pacemakers. In the mice, the batteries performed well for about a week without much degradation. Temporary pacemakers are sometimes implanted during open heart surgery before being surgically removed a few days later. With a biodegradable battery, this second operation would be rendered unnecessary since the battery would naturally absorb into the body.

The team also use its batteries to power temporary wireless Bluetooth temperature sensors placed in groundwater and under soil. In this context, the advantage of a biodegradable battery is that it reduces the amount of battery waste that ends up in landfills.

Gustav Nyström, an expert in biodegradable battery design at Empa in Switzerland who was not involved in this project, suggests controlling the absorption rate is an important future step for Bandodkar’s team. ‘It is an inherent challenge to be able to control device lifetime for the application,’ he says.

This article is is adapted from Celeste Brady’s in Chemistry World.

Summary slide with questions and the article as pdf for use with your 14–16 classes on electrochemical cells: rsc.li/3VDL8s8