How a ruthenium-based catalyst reaches 99% yield

A starter slide to give 14–16-year-old students a new context for their study of cracking or recycling. 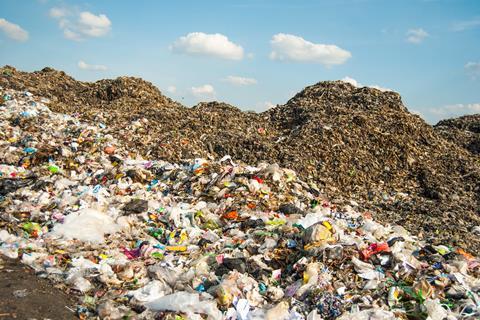 Plastic waste can now be efficiently converted into methane using a ruthenium-based catalyst. The technology could help mitigate the planet’s growing plastic waste problem while producing methane for use as a fuel or chemical feedstock in a more environmentally friendly way than fracking.

Recovering chemicals and fuel from plastic waste streams is nothing new. Processes including pyrolysis, which break down plastics using high temperatures and catalytic processes, can recover useful materials. However, these approaches create several products, including waste, and require additional processing.

Another process called hydrocracking, which is often used in refining oil to make jet fuel and diesel, can convert plastic too. This reacts a feedstock with hydrogen and a catalyst at much lower temperatures and produces less waste. However, using the approach with plastic has been hampered by a lack of efficient and selective catalysts that can outperform thermal methods.

Researchers at the Swiss Federal Institute of Technology in Lausanne investigated the use of ruthenium nanoparticles on zeolite supports as a catalyst. They discovered that the catalyst efficiently transforms polyethene, polypropene and polystyrene into methane that could be fed into natural gas networks.