Soil samples gathered by China’s Chang’e-5 spacecraft in late 2020 have been tested as catalysts for water splitting and carbon dioxide conversion. The goal is to be able to make oxygen, hydrogen and other fuels on the Moon, using only materials available on the lunar surface. That would reduce the need to transport chemicals from Earth, which is expensive and difficult. 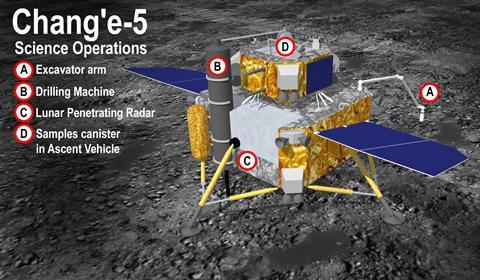 Scientists have proposed a new technology called extraterrestrial photosynthesis. The approach tries to maximise the use of lunar resources, including extreme temperatures and intensive sunlight. The method uses water and carbon dioxide exhaled by astronauts to make a range of chemicals and takes advantage of the extreme environmental conditions on the Moon, which include temperatures that range from –173°C at night to 127°C during the day.

The team analysed the lunar samples and found that iron-, magnesium- and titanium-rich compounds present in the rocks could catalyse a number of processes. The scientists successfully tested the compounds as electrocatalysts to produce hydrogen and oxygen from water using sunlight. The lunar samples were also tested as photocatalysts for converting carbon dioxide into fuels like methane and methanol. The soil also has a porous structure, which provides a larger surface area for reactions.

A one-slide summary of this article with questions to use with your 14–16 students: rsc.li/3xqckAH