When chemistry and art collide

From disappearing bottles to catalytic clothing: Josh Howgego investigates how a scientist–artist duo is starting conversations about society’s future 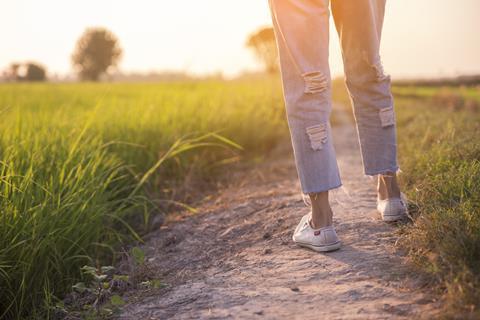 UK artist and fashion designer Helen Storey has created some arresting installations over the years. You may have seen a city square filled with miniature tepees made from pairs of jeans, for instance. Or perhaps her series of ‘disappearing’ washing-up bottles. Or watched a model being lowered into a tank of water and her clothes then slowly dissolve.

Walk around any city and you’re sure to stumble across a street installation. But there is one thing that sets Helen’s work apart: many of her recent creations took two people to mastermind – and the second person is a chemist.

At the time Helen had been commissioned by consumer products company Unilever to produce a piece of art that provoked them to think differently about their relationship with the environment.

‘When they get an opportunity like this, some people might come back with a T-shirt with words on it,’ says Helen. ‘But I was determined to try to do something more serious, that would actually make a difference.’

When she heard Tony on the radio she sensed an eagerness for allowing others to understand his world of science that convinced Helen he could be a like-minded individual. So she gave him a call.

‘The idea she rang me up with was: why can’t a bottle “talk” to its contents?’ explains Tony. ‘Quantum mechanics tells us that two particles that are entangled can communicate across the universe. So why can’t a bottle of washing-up liquid know when it’s empty, and disappear?’

‘To a scientist that idea is both ridiculous and inspirational,’ he says, since quantum mechanics operates on the scale of atoms not kitchens. ‘So I wanted to meet this lady to see if she had more of these ideas.’

It turned out that Tony and Helen shared a desire to engage seriously with big questions for society – and they began to work together.

‘Helen wasn’t content to do art for art’s sake, and I wasn’t content to do science for science’s sake,’ says Tony. ‘Our coming together allowed us to communicate much better, and bring people’s attention to the deep issues in our society.’ Their projects all investigate big questions that face society; debates about consumerism and waste, or pollution and the environment.

Their approach is, they say, unlike other social responsibility projects in that it steers away from evoking fear or guilt in the audience.

‘Neither of those are sustainable emotions; everybody wants to get rid of them as quickly as possible,’ says Helen. ‘But if you can attract them towards something through awe or beauty − or humour even − then I think it’s much easier for them to feel open to what they’re being asked to engage with.’

The approach has been successful. Over 10 years of collaboration Helen and Tony have produced an array of exhibitions. Each of them has been engaging, some have been shocking, and one has even proved quite practical.

It was Helen’s initial question about disappearing washing-up bottles that prompted their first project, which they dubbed Wonderland. Helen had been interested in modern throw-away culture since the 1980s, when she had created fashion ranges influenced by these ideas. She wanted to imagine that the bottle could somehow ‘know’ that it was empty and take on a second life in some form, to encourage people to think about waste packaging in new ways.

So Tony and Helen designed a washing-up bottle that would dissolve in warm water and have a second life as a plant-growing medium after it was empty. Tony made a prototype using poly(ethenol) (polyvinyl alcohol; PVA) which dissolves in warm water, unlike poly(ethene terephthalate) (PET) or poly(ethene) which is what such bottles are normally made from. They put the bottles on display in Sheffield as part of their Wonderland exhibition.

Like some of their later projects, it was conceivable that the ‘disappearing’ bottle, or something like it, could have potential as a product. The idea of using the bottle for two purposes – storage and plant growing – might have appealed to green consumers. But Tony says this particular idea didn’t go anywhere because in reality many bottles are made from PET which is widely recycled and using PVA would have contaminated an important recycling stream.

Yet because Tony and Helen are consistently trying to start discussions about big problems, several times along the way they’ve come up with ideas that could, with some development, present new solutions. ‘It’s pretty typical that these don’t always work out’, says Tony. ‘That’s just part of the research process.’

Their dissolving dresses act as a metaphor for our consumer culture

Not all of Tony and Helen’s work is as quotidian as the washing-up bottles. Another part of the Wonderland project saw Helen collaborate with both Tony and scientists at the University of Ulster to make a series of dissolving dresses − another metaphor for our consumer culture, they say.

Though they had slowly dunked dresses into bowls of water at installations in Sheffield, things took a more risqué turn in 2008 when they began to work with fashion photographer Nick Knight, whose credits include directing a Lady Gaga music video. Nick’s idea was to film a model wearing one of the dresses being lowered into a huge tank of water, and keep the tape rolling as she gracefully writhed, allowing the dress to disappear.

Helen and Tony’s work tends to arrest audiences with shocks or quirkiness, as a means to delve into serious issues. And while the disappearing bottles and dresses didn’t lead to any obvious impact, their latest project looks set to do so.

The idea was born when Tony was in a meeting he wasn’t finding too interesting. Doodling idly, he had been trying to calculate the surface area of his suit – and he was struck by how large this could be even for a modest-sized piece of clothing.

Then two other ideas also collided in his mind. He knew that atmospheric pollutants such as nitrogen dioxide (NO2) are a big problem. For example, higher NO2 concentrations are thought to increase the likelihood of children developing asthma and cause other respiratory problems. He also knew that titanium dioxide (titania; TiO2) has been used as a light-activated catalyst capable of breaking down NO2 (it actually produces hydroxyl radicals from water which go on to break down the NO2). Then he thought that, given his new insight into the large surface area of our clothes, if they were coated with TiO2 it might have the potential to break down enough NO2 in the atmosphere to make a difference to people’s health.

The idea of daubing clothes with titania is not as crazy as it might sound. Tony would plan to use agglomerated TiO2 nanoparticles, which − because of their relatively large size − don’t have any toxic effects.

He estimates that four million pairs of trousers (equivalent to half the population of London) have a combined surface area of roughly 80 million m2, and reckons that if all that cloth was coated with TiO2 it could remove 40 tonnes of NO2 from the air each day. In London roughly 350 tonnes of nitrogen dioxides (NOx) are produced every day, so it may not have an important enough effect. But in cities such as Sheffield pollution is lower, and getting a significant proportion of the population to sport TiO2 in their clothes would, Tony thinks, be enough to reduce NOx pollution to internationally accepted levels.

The best way of getting TiO2 into clothes would be to develop a laundry powder that would wash it into the fabric and in so doing deliver a technology to clothes we already own. But what would the public think of such an idea?

Helen and Tony set out to investigate, again using art to start the public discussion. The first installation, Field of Jeans, was shown in 2011 at Euston Square and Chelsea College of Art, London. ‘They are potentially the world’s first air purifying jeans,’ ran the explanatory billboard.

Helen and Tony have created a ’living map’ showing social and traditional media engagement with their catalytic clothing campaign. It is estimated that the campaign reached 300 million people in 147 countries over three months in 2011.

Helen and Tony have created a ’living map’ showing social and traditional media engagement with their catalytic clothing campaign. It is estimated that the campaign reached 300 million people in 147 countries over three months in 2011 (http://www.catalytic-clothing.org/film.html#lmfilm).

Despite the pair’s enthusiasm, questions remain over how feasible the idea would be. For example, the effect of putting a new and large-volume source of TiO2 into waste water isn’t clear. There could be ramifications on water treatment plants, for example, and research would be needed to investigate these, says Tony.

But as Helen points out, ‘there’s no point spending millions on researching something that people are never going to use’. That’s why the discussions that catalytic clothing has started are important, she says. It’s about asking what people think.

‘The great thing was: people got it,’ says Helen. In fact, when she and Tony give talks about the idea, the reaction is overwhelmingly positive. ‘We had one woman stand up after a talk in China and tell us she wanted to make it her life’s work to make this happen.’

But Tony says that when he talks with the big three personal care chemical companies (Unilever, Proctor & Gamble and Reckitt Benckiser) ‘their technical people are really keen but their marketing people just don’t get it’. Tony says his next move has been to talk to policymakers, which he did recently when visiting China. They hope that this avenue will provide more traction for the idea.

By starting these debates, Helen and Tony’s work reminds us how technological products – from plastics to catalysts – can be both causes and potential solutions to problems that affect every person on the planet. The choices society makes about what technologies to research and deploy, and how they are applied, has massive ramifications. But until people realise that, Helen and Tony will be ensuring there is a field of jeans or a disappearing dress somewhere to remind them.

In 2013, the Royal Society of Chemistry collaborated with Helen Storey and the London College of Fashion to create the Dress of Glass and Flame. This project was born from Helen’s fascination with both glass blowing and ongoing discussions about whether glass is a liquid or a solid.

To find out more about their work visit Catalytic Clothing’s website.

To find out more about their work visit Catalytic Clothing’s website (http://www.catalytic-clothing.org/home.html).