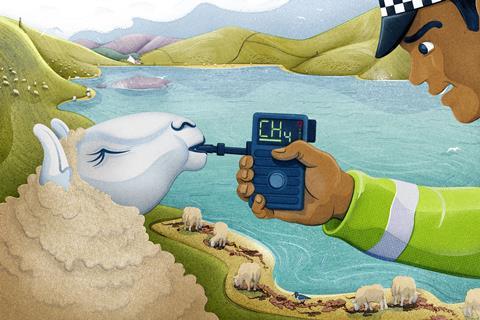 Is seaweed the answer for sheep that are over the limit?

Livestock farming is a major contributor to international methane emissions due to the methane released when the animals belch. Recent reports about sheep that feed exclusively on seaweed – found only on Orkney’s northernmost isle, North Ronaldsay – suggest that their unique diet may be the answer to livestock’s methane problem. Scientists, however, are still unsure of seaweed’s long-term effects.

In terms of greenhouse gases, methane is a heavyweight. Its global warming potential, meaning how much heat it can trap in the atmosphere over a certain time period, is more than 30 times greater than carbon dioxide over 100 years. And, while it’s difficult to quantify the exact contributions from each methane source, grazing animals that chew the cud – also known as ruminants – are estimated to be responsible for 15% globally. Consequently, there is a pressure on those working in animal agriculture to find ways to lower emissions. This is where seaweed comes in.

Researchers have found that putting small amounts of seaweed into livestock feed lowers the methane emissions significantly, with some studies reporting nearly complete removal of emissions. It’s thought to work because the seaweed contains a brominated organic compound called bromoform, CHBr3, which disrupts the enzyme used by the methanogenic microbes in the ruminant stomach to produce methane. A seaweed-spiked diet, then, could perhaps provide a path to greener farming.

However, seaweed may not be able to help with methane emissions in the long run. ‘The microbiome is quite happy to change, so, in the long term, there will likely be an adaptation,’ says Gordon McDougall from the James Hutton Institute in Dundee. Gordon is part of a Knowledge Transfer Partnership between academia and industry looking at developing seaweed feeds. He echoes the concerns of others in the field, such as Alexander Hristov from Penn State University in the US, that the methane-mitigating effect will fade over time. ‘We won’t even be measuring methane for this project,’ he says.

But seaweed could still make livestock farming greener. Gordon’s project is looking at whether seaweed may be able to replace soybean as feed protein. ‘Soybean doesn’t have a good environmental profile,’ he says, ‘it’s produced in South America and involves [the] clearing of natural forests.’ British seaweed could be a more environmentally-friendly alternative, though the implications of industrial aquafarms or the harvest of wild seaweed are not yet clear. So it seems there is still some way to go before we have a viable and lasting solution to livestock farming’s climate problem.