Glow in the dark road lines that eliminate the need for street lights and images of huge snowflakes that appear on road surfaces when temperatures drop may sound fictional, but a project in the Netherlands is set to bring these ideas to fruition.

The aim of the Smart Highway project is to revolutionise the roads that we drive along. It is a collaboration between the Dutch designer Daan Roosegaarde and the Dutch construction firm Heijmans. Daan’s earlier socially-conscious, smart designs have been exhibited worldwide including at Tate Modern in London, UK and the Rijksmuseum in Amsterdam. The locations of the Smart Highway project’s first public viewings were less illustrious: two 500-metre stretches of the N329 highway near Oss in the Netherlands.

In early April, the first stage of this project – the glow in the dark road lines coined Glowing Lines – were unveiled on these short stretches of road to great acclaim. A short 14 days later, the trial was halted because the lines were found to not glow properly when it rained. A Heijman’s spokesperson says that in ‘the coming period we will test and upgrade this Glowing Lines pilot, and expect the updated version to be ready just before the summer’.

Photons from the UV radiation in sunlight are absorbed by phosphors in the lines, and then released again giving off an eerie green glow. The phosphor used in these lines is strontium aluminate doped with europium or other materials. Strontium aluminate is already widely used in other glow in the dark products such as emergency exit signs. The lines also have a top-up energy source from a solar panel available if needed. This means the intensity and duration of the lighting can be kept constant whatever the weather or season.

Another – even more surreal – paint in development as part of this project is one that is visible only at low temperatures. Huge snowflakes will appear on road surfaces coated with this temperature-responsive fluorescent paint when temperatures fall below zero, warning drivers of icy conditions. 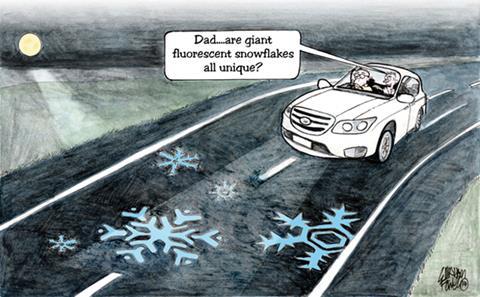 Also in the pipeline are interactive lights that turn on when vehicles approach and turn off again when they have passed, and lights resembling children’s paper windmills that are powered by the draught created by passing ?vehicles.

The project also has the potential to boost the practicality of electric cars with its Electric Priority Lanes. These road lanes have layers of induction coils under the tarmac that can recharge electric cars as they drive along them. This isn’t as off the wall an idea as it might first seem, others are also testing out wireless charging for electric vehicles based on electromagnetic induction.

It’s still early days, but with Daan and Heijmans recently committing to collaborate for at least another three years, it’s clear they believe they are lighting the way to the highways of the future.