How to shrink an ozone hole 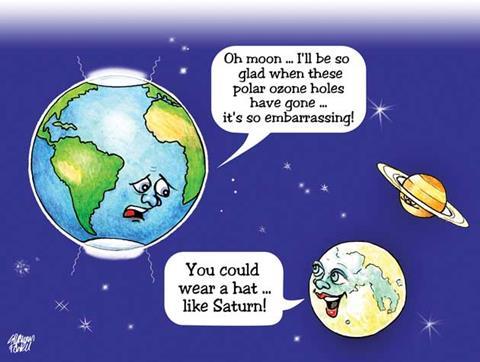 The thinning of the ozone layer over the Antarctic, commonly known as the ozone hole, shocked the world when it was discovered in the 1980s. What followed was a historic international environmental effort – and now a new study can confirm it is paying off.

The ozone layer is one of the Earth’s important shielding barriers, protecting us from UVB rays, which are known to cause skin cancer. This makes the ozone hole an urgent matter, especially because it was created mainly by manmade chemicals called chlorofluorocarbons (CFCs). CFCs have been widely used in aerosols, air-conditioning systems and fridges, from which they are released into the air through use or disposal. Winds carry them up into the stratosphere, where they are broken down into radicals by ultraviolet radiation from the sun. It is the chlorine radical, Cl·, created by this process that catalyses the decomposition of ozone (O3):

The chlorine radical can then react with thousands of other ozone molecules, which above the Antarctic has caused an absence of ozone spanning tens of millions of square kilometres.

In order to combat the growing problem, the 1985 Vienna Convention and the 1987 Montreal Protocol were put into place to first freeze and then phase out CFC production. The policy effort was successful. In part, it was helped by non-governmental organisations directing scientific research towards ozone-safe alternatives, and the public also contributed by changing their consumer habits. Therefore, it was rather worrying when in October 2015, after reports of reduced rates of ozone decline, the hole grew to a record size – up a massive 4.8 million km2 from the previous report in 2011.

But now, a new study from Massachusetts Institute of Technology, US, and the University of Leeds, UK, has shown the Antarctic ozone hole is healing. There’s an identifiable increase in ozone. They also have an explanation for the monstrous 2015 size: the eruption of the Calbuco volcano. Volcanic eruptions send out sulfur particles that significantly add to the size of stratospheric clouds, known to greatly enhance the destruction of ozone. In fact, a pattern can be observed based on other volcanic eruptions in previous years. Despite this interference, the team has shown the hole is on the mend.

Final success is some way off. Healing will not be complete before the hole closes permanently, which is expected to happen mid-century. Hopefully by then the sister hole above the Arctic, as well as the general thinning around the globe, will also have been repaired.